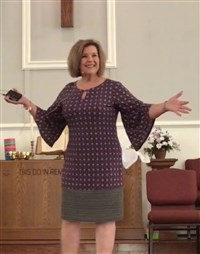 Then they came to Jericho. As Jesus and his disciples, together with a large crowd, were leaving the city, a blind man, Bartimaeus (which means “son of Timaeus”), was sitting by the roadside begging. When he heard that it was Jesus of Nazareth, he began to shout, “Jesus, Son of David, have mercy on me!” Many rebuked him and told him to be quiet, but he shouted all the more, “Son of David, have mercy on me!” Jesus stopped and said, “Call him.” So they called to the blind man, “Cheer up! On your feet! He’s calling you.” Throwing his cloak aside, he jumped to his feet and came to Jesus. “What do you want me to do for you?” Jesus asked him. The blind man said, “Rabbi, I want to see.” “Go,” said Jesus, “your faith has healed you.” Immediately he received his sight and followed Jesus along the road. -Mark 10:46-52

I have become very comfortable with online and curbside shopping. My entire Christmas was bought through Amazon and Target. However, my daughter ordered something through a certain “big-name” chain store that she could not find anywhere else. Y’all…I despise this store! DESPISE! I will drive anywhere else, as far as I need to, in order to NOT have to go into this certain “big-name” chain store. The item ended up being the wrong item and needed to be returned, which cannot be done through curbside. Having a new baby just 2 weeks prior, I did not want my daughter having to go inside to do the return. Which meant I was going to be forced to go into that certain “big-name” chain store. I almost gave her the $40 and said forget it. But I sucked it up and went.

After waiting in line at the service desk for 45 minutes and thinking very unchristian like thoughts, it was finally my turn. As I stepped up, two workers were there, and the phone rang. One worker answered it and told the other worker it was Delores. They put it on speaker and talked to an elderly worker who was out on medical quarantine due to COVID Omicron. They were asking how she felt and truly seemed concerned. The worker helping me had a mask on, as did I. Wanda proceeded to tell me she was terrified of getting sick. She told me she had received the vaccine as soon as it came out because she had extreme lupus. She went on to tell me she was raising 5 grandchildren and did not have time to get sick and miss work. And continued, “I certainly cannot die and leave these babies alone. I am all they have.” She said she made it through the first wave last year but this one was so contagious that she literally lived in fear every day of contracting the virus. She said, “For people like me with existing medical conditions, it can be a death sentence. All I know to do is pray and ask anyone that is a prayer warrior to pray for me.” She handed me my refund, apologized that she babbled on, and told me to have a good day. The person behind me was all up in my personal space as I turned to leave. I got about 3 steps into my escape route and realized that I almost missed it. Standing in that place I DID NOT WANT TO BE…it hit me…the reason I was there…and I almost missed it!

I whirled around, stepped back in front of the person who had been all up in my groove, and told Wanda who I was and what I did for a living. I asked if I could put her on my prayer list to pray FOR her. She replied, “Please.” (NOPE—NOT ENOUGH AMY). So, I asked if I could pray WITH her. She replied through tears, “PLEASE!” She then turned to the other worker and told her she was taking her break. And there, standing to the side of the service desk of that certain “big-name” chain store I despise, I prayed and pled the blood of Jesus over someone like I have never prayed before. It was a powerful moment and, in the midst of it all, that place I despise became a sacred space of prayer and worship as Wanda called out to Jesus and we gave God glory for carrying my new friend through thus far, and all God would carry her through in the days to come. And we prayed for her grandbabies!

My new friend Wanda was calling out to Jesus. I wonder how many people had shushed her cries. Jesus was stopped and waiting for someone to step up and be a witness to her…to tell her to “get up and come”. I realized that day, in my angst and despise of being somewhere I did not want to be, I ALMOST missed Jesus! But I saw Him in a mighty way that day, inside a certain “big-name” chain store.

Our witness may happen when we least expect it, where we least expect it!  Witnessing for, and to, the truth-filled, transforming power of Jesus may mean going places we do not want to go. However, we have to remove those things that “blind” us. The distractions in our life…the noise of the world…popular opinion and trends- we have to remove those things that blind us and keep us from seeing Jesus, WHEREVER we may be! And thank the good Lord it does not rely on our abilities. We recall what Jesus told the disciples in Acts 1, “But you will receive power and ability when the Holy Spirit comes upon you; and you will be My witnesses…even to the ends of the earth.”