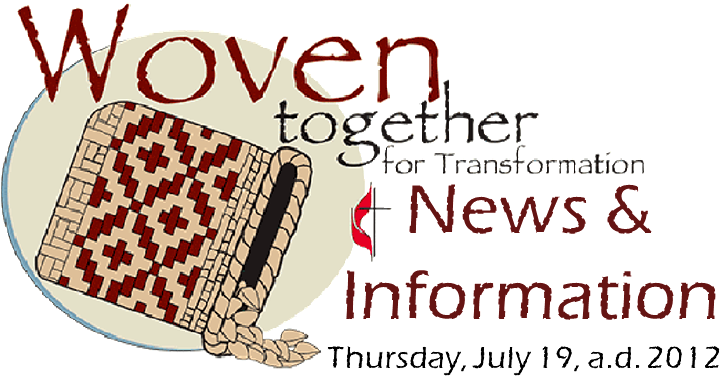 2012 Episcopal Address Now Available
Bishop Robert Schnase, episcopal leader of the Missouri Area of the United Methodist Church, brought a rousing "State of the Jurisdiction" message as he delivered the official 2012 Episcopal address.

Bishop Bledsoe took to the microphone in his own defense Thursday, but SCJC delegates voted to affirm an episcopacy committee’s decision that he be retired involuntarily. The vote was 208 in favor and 45 opposed. The episcopacy committee’s decision to retire a bishop, based on a negative job performance evaluation, apparently is a first for the denomination. Bishop Bledsoe can appeal to the UMC’s Judicial Council. He said he and his wife, Leslie, continue to pray about whether to do so.

Ten new United Methodist bishops have been elected in three U.S. jurisdictions, with an eleventh expected to be elected on Friday. Currently, Dr. Mike McKee of Central Texas Conference is the leading candidate for the final open position, with Rev. Eradio Valverde of the Southwest Texas Conference close behind. The last vote on Thursday night showed Dr. McKee with 138 votes and Rev. Valverde with 111. Approximately 150 votes are needed to elect (60 percent of the number of valid ballots cast).

Cynthia Harvey is First Bishop Elected
Rev. Cynthia Bishop has been elected to the episcopacy by the delegates of the 2012 South Central Jurisdictional Conference. She is the first female bishop elected by the SCJC in the last 16 years. Her episcopal assignment will be announced later in the conference.
Gary Mueller Next to be Named Bishop in SCJ
The Rev. Gary Mueller, senior pastor of Plano First UMC, received the required number of votes to win the second of three available episcopacy positions for the South Central Jurisdiction. Bishop Mueller was elected on the 11th ballot of the conference. The delegates still have one more bishop slot to fill.
SCJC 2012 is Open for Business
After some minor amendments to the Pre-Conference Journal were affirmed, the “real” business of the meeting began with the reporting of the structure and Rules of Order and a the first report from the Episcopacy Committee leading into the first Episcopal Ballot.
SCJC 2012 News & Updates