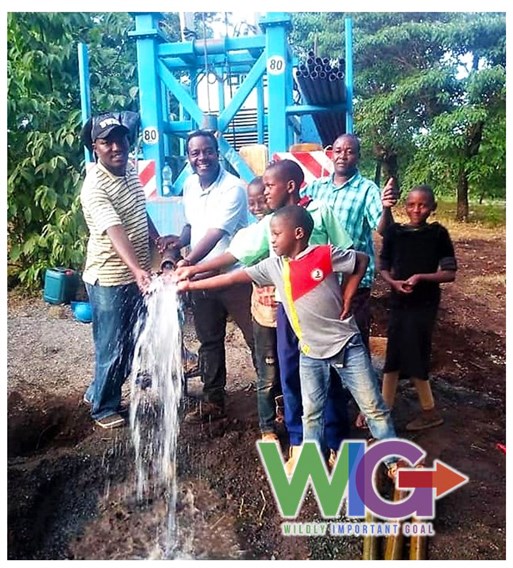 To the utter delight of local villagers and a West District mission team water began to spew forth from deep beneath the ground after drilling equipment had finally broken through bedrock last January at a school near Maua, Kenya.

Though it briefly appeared that there might be a cave-in, the casing took hold and a brand new well began to offer up clean, drinkable water. The aptly named New Hope ECDE (Early Childhood Development Education) center had just received a great blessing. New hope, indeed! Not only will this make life easier and more healthy for the community, a well also helps the school qualify for more government grants to ensure its success, according to Dr. Lisa Neslony, West District superintendent.

Until the water began to flow, a stream was the only source of water for those living near the New Hope school. It’s where they bathed, washed clothes and collected water to carry up the mountainside to their homes. For some, it was a journey of three to five miles. Understandably, there was quite a celebration when water issued forth from the well. People who were gathered there began singing, dancing and splashing their faces.  Women, especially, had a look of awe borne of a lifetime of arduous treks for water, Lisa said. “It was like, ‘You mean this was underneath us the whole time?’ People get it – water is life!”

Lisa’s involvement in the project dates to January 2017, when she made her first trip to Kenya on a team that included Bishop Mike Lowry. Bishop Lowry spoke with her then about putting together a 2018 trip that would bring together churches in the West District, many of which are too small to build a team of their own. In other words, gather the disciples in your area and go forth and be the church.

The need for a well was identified; it would cost $20,000, and that meant every church in the district would need to raise a minimum of $300. Lisa presented the opportunity and was thrilled with the response. Almost “99.9%” of the churches made donations, she said, and in January 2018 a West District mission team was able to present the school with a check for the full amount.

Flash forward to January 2019, and the well is now a reality. Lisa is quite proud of the churches of the West District and the way they “grabbed onto” the idea. “It’s made us more passionate Christians,” she said.

Being part of a project like this helps grow disciples not only in the West District, but in the Maua area as well. The people of the New Hope community know that others in need will come to the well. When they do, they will quench their physical thirst and be told about Jesus Christ and the “living water” he offers all who choose to follow him.

Rev. Kevin Anderson traveled with both the 2018 and 2019 mission teams. He was appointed last month to Trinity UMC, Arlington, following a couple of years as pastor of the West District’s Iredell FUMC and Cranfills Gap FUMC.

Kevin drew a parallel between the story of this new well and the biblical story of Jacob’s Well, where the Samaritan woman encountered Jesus. By reaching out to her, Jesus was crossing “significant cultural boundaries,” Kevin wrote in his Jan. 13 blog. With this project, the West District united to “cross cultural boundaries to help a community in need simply because there was a need and we could help.”

Here in the U.S., having access to water is something we tend to take for granted, Kevin wrote, but the New Hope community won’t do so anytime soon. “Jesus speaks about living water and how when we have that living water that we will never thirst.”

In return for such a blessing, Kevin offered three suggestions: “First, we can give thanks to the Lord each and every day. We witnessed that over, and over, and over [in worship and at the dedication of the new well]. Second, we can remind people of who Christ is and what a difference Christ has made in our lives. Christ meets us where we are and is patient with us, while at the same time he encourages us to grow. Third, we can sing songs of praise and thanksgiving for what we have and the opportunities that are given to us.”

In John 4:14 (CEB), Jesus said, “ …  but whoever drinks from the water that I will give will never be thirsty again. The water that I give will become in those who drink it a spring of water that bubbles up into eternal life.”