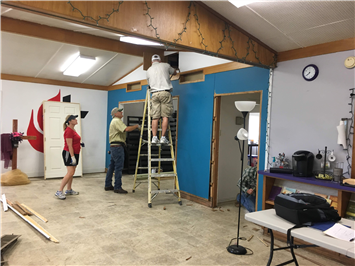 Almost any clergy person will tell you that your first year at a new appointment is about three things: learning, observing and loving. It is vital to a new ministry setting to learn all you can about the ministry/ministries of your new faith community, to observe every aspect of the life of the community of faith and to build relationships by simply loving on the people who make up the faith community. And that is exactly what I did during my inaugural year as the director of the Tarleton Wesley – I learned, observed and loved – and, as a result, he 2017-2018 school year at the Tarleton Wesley was exhilarating!

As a part of the three-point process, I started by studying the metric data of worship attendance, small groups and “Free Lunch” from the past few years. What I anticipated was that if the rate of growth continued, we would quickly outgrow our current building. In an effort to address this issue before it became a concern, I began brainstorming about the use of the space in our building. The more I learned, observed and loved, the more ideas began to come to mind.

One of the first “unique nuances” of our space that I noticed, was a brick fireplace obscured by the worship platform. So, I set my mind on relocating the stage to the opposite side of the building. This move would a difference in many ways: It would double our space for worship, it would allow us to more efficiently use the space we have, and it would open up a space in front of the fireplace for a lounge area. However, making up my mind to do it, and then actually finding the time and/or energy to make it happen are two different things.

One Monday near the end of the semester, Newcastle FUMC was here providing Free lunch as they do every semester. Michael Cyr, the pastor of Newcastle FUMC, and I were visiting during lunch and we began to chat about summer plans. I shared my idea of moving the stage with Michael to see what he thought about it. Newcastle FUMC had built the existing worship stage a few years before, and I wanted some input from him and the folks at Newcastle before we did anything.

Michael was very supportive of the idea but wanted to run it by his church to get more of their input. A few days later, he called with the idea of Newcastle FUMC’s annual Mission Trip being at the Wesley to include more work than just the stage. Michael invited a handful of our student leaders and me to a meeting to discuss the Mission Trip.

During the course of the meeting, the project quickly went from me asking, “How do you feel about moving the stage?” to the folks at Newcastle saying, “Make a wish list of everything the building needs and we’ll come look and see what we can do.”

That’s exactly what I did, and, a few days later, Michael and a few members from Newcastle came to the Wesley with my wish list in hand. After the walk through, we visited in more detail over lunch about the potential for the mission week and the plan became, “Let’s do it all!”

- Relocating the worship stage; building a new one in the opposite corner of the building

- Widening and raising an existing opening in one of the walls

- Closing in a doorway, creating a cubby for the new 400lb ice machine

- New electrical panel in the kitchen

- Replacing three celling fans on one side of the building

- Servicing all the A/C units

Yeah, I know…right? That was quite the wish list.

Michael to the project plan and went to work building a materials list and estimating the cost for the work. After a few days, he estimated that to do everything on the list would cost around $24,000. So, we had our plan, now we just needed to dig through the couch cushions and find a way to fund the project.

During a conference call with Jeff Roper, executive director of the Center for Leadership & Administration, to discuss the project plan/mission trip, Jeff committed a dollar-for-dollar match of up to $8,000 from the conference for the project. With that pledge in mind, we set our fund-raising goal at $30,000.

In the first 24 hours of taking a wee leap of faith and setting that $30k goal, we had three separate checks for $1000 to go to our project plan. In the following two weeks, Michael had a church member challenge Newcastle FUMC with another dollar-for-dollar match of $5000, and boy did the church respond. Long story short, in just six weeks, we raised almost $38,000!

As a result of the incredible generosity shown for our plans, McCoys, the local lumber yard, gave us a very gracious price point on materials, which allowed us to add things we noticed things throughout the week to the project. So in addition to the list above, we were able to tackle things such as…

- Removing of a dead tree and shrubs on the property

- New doorknobs throughout the entire building

- New lighting for our worship space

- Window decal signs for the exterior of the building

- New faucet for the kitchen sink

Words cannot express the emotions I’ve felt during the past few weeks. It’s been a combination of joy, excitement, anxiety over not finishing when expected, humility and a general overwhelming sense of God’s grace.

There has been a lot of discussion about our conference “WIG” of making disciples of Jesus Christ for the transformation of the world. When I talk about making disciples with the Tarleton Wesley students, the conversation is around the fact that in order to make disciples, we have to be disciples. It’s all of the things that scripture teaches us to be as disciples of Jesus that enable us and drive us to make disciples. This project is a great example of the body of Christ at work to achieve a common goal, and it served as a very real and excellent reminder of just how much ministry is about relationships. Relationships with God, with each other and among clergy and other churches all played a major part in the immediate success of this project, as well as all he fruit this will bear for years to come.  It has shown me what can happen when we dare to dream big and dream in the faith that God will provide!

We will be officially celebrating our new space during an Open House on Saturday, Sept. 22 and would love to see you there. Our address is 1140 W. Tarleton St., Stephenville, Texas 76401

Here are a few more before, during and after photos from our facelift project. Click on an image to enlarge.