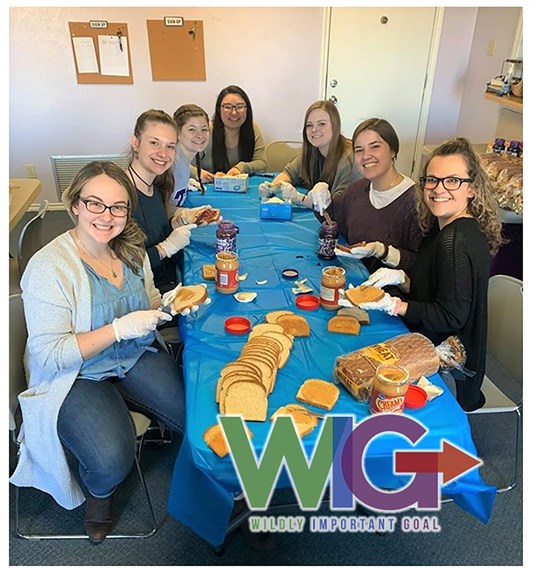 About a year ago, Anna Breck, a junior active in the Wesley Foundation at TCU, came to the realization that the number of freshmen participating during the fall semester had dwindled considerably by spring. She wondered how the Wesley could more effectively reach – and retain – students new to the campus.

“My sophomore year,” she said, “I saw the low number of first-year students involved in the Wesley at the end of their first semester. This sight broke my heart.” Her own goal for the Wesley she loves was to see it grow throughout her four years on campus, and she wanted to leave the place even better than she found it.

Anna decided to create a mentoring program, and her idea was clearly a fruitful one. Average attendance at Wednesday night worship wavered between 30 and 35 for the 2017-18 school year. This year, thanks to the influx of freshmen, that number is growing - a number that includes 18 to 20 freshmen on a regular basis. They are involved in the worship team, social media and event planning. Better yet, four have joined the Leadership Team.

Recognizing the need was key. Once she did, Anna took her concerns to the next Leadership Team planning retreat. She proposed a system to reach first-year students, encourage them to participate and keep them coming back. Rev. Paul Massingill told her about “Freshley” (rhymes with / spelled like Wesley), a ministry at other Wesley Foundations, including the one at the University of Texas at Arlington. Paul, conference coordinator of campus ministry and emerging leaders, is the former director of campus ministry at the TCU Wesley.

Anna did some research and found Freshley to be exactly what she envisioned. She researched what other schools were accomplishing through the program and spent the summer planning what she “intended Freshley to be” for TCU. It’s an intentional program directed toward recruiting and guiding first-year students, she said. “Throughout the year, we have recruited students at events such as the Activities Fair, Frogs First Worship and more.”

In this first year of the program, Freshley launched two life groups, which spent the fall semester discussing how God was moving in their lives and how they could better support one another. Each of the Freshley participants has been paired with a mentor from the Leadership Team. The students have developed connections and a sense of community. This spring, the two life groups are focused on a three-section Bible study Anna has written.

The depth of mentoring, support and affirmation the Freshley students receive amounts to what Rev. Johnny Silva, TCU Wesley’s current director, refers to as being “poured into.” Anna’s first year was such a positive experience that she wanted to return the favor, he said. She’s just naturally engaging, and she continues to be “very intentional about connecting” with the first-years.

One of the Freshley students, Rebecca Thompson, has signed on to help coordinate the program next fall. There is definitely more to come, according to Anna. “Moving forward,” she said, “Freshley is looking to expand the program to pave the way for the future of the Wesley.”

The TCU group is one of six Wesley Foundations located in the Central Texas Conference and charged with fostering discipleship among a new generation of leaders.

To learn more about the TCU Wesley Foundation, access www.tcuwesley.org/ and/or www.facebook.com/tcuwesley/.

Photos courtesy of the Wesley Foundation at TCU