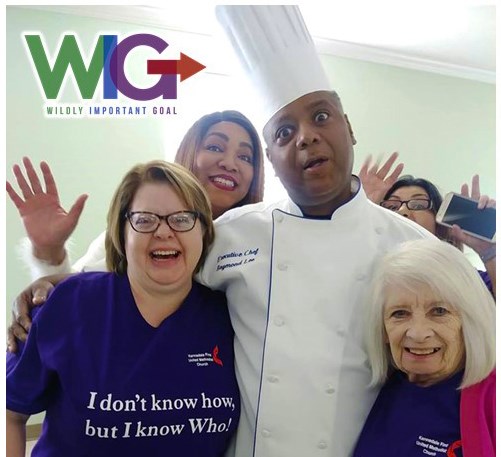 What can a small United Methodist church on the outskirts of a big city accomplish on little more than a hope and a prayer? First United Methodist Church of Kennedale, located just outside the Fort Worth city limits, has an answer: A congregation can feed its community – body and soul – and, in the process, see a significant uptick in professions of faith.

Joveta Kanion, one of the newest members of Kennedale FUMC, came to a sudden realization one day last summer. Wouldn’t this church be an ideal location for a soup kitchen? Joveta kept her notion to herself for a bit - being new, she didn’t want to come across as presumptuous or officious. However, it was just a matter of days before such a wonderful and outwardly focused idea couldn’t be contained any longer and she shared her inspiration with her pastor, Dr. Nelda Barrett Murraine.

Nelda describes Joveta as “a strong, faithful, dedicated woman, a real go-getter.” However, she acknowledges that every pastor has heard praise-worthy ideas that never came to fruition. “It’s great to have an idea, but you’ve got to work it,” she said. “Joveta came to me, she and I talked about this and prayed about this for several months.”

One thing was certain. Kennedale UMC didn’t have the budget to fund this kind of outreach. Nelda laughed heartily. “We don’t have any money,” she joked. “We don’t have two pennies to rub together, but we trust that God will provide.”

Long story short, Soup Kitchen Kennedale opened Sept. 4, 2018, and has since served a meal every Tuesday evening from 5 - 7 p.m. Sometimes soup is on the menu, but generally it’s something more substantial – a hot, healthy plateful of protein, vegetables, green salad or slaw, plus maybe a few carbs. Joveta insists that each meal be nutritious, as does volunteer Chef Raymond Lee. The talented, classically trained chef donates his time, driving in from Lewisville each Tuesday to cook. Like Joveta, he has a heart for serving people who struggle to make ends meet. The soup kitchen was established as an outreach to Kennedale’s homeless community, but, in a few short months, it evolved to serve others as well. Among the guests who come on a given Tuesday, are senior citizens who, as Nelda puts it, “need to stretch that social security check,” young families living paycheck to paycheck, special needs adults and some folks who are just plain lonely. Those who are able give a suggested donation of $5.

It has been less than five months since the soup kitchen opened, and already three of its guests have joined the church. One of the three is counted among the 15 people who made professions of faith at Kennedale UMC during 2018. That number is up 88 percent from the 2017 total, which is cause for celebration in keeping with the Central Texas Conference’s WIG (Wildly Important Goal) of making disciples of Jesus Christ for the transformation of the world.

How does such a small church make such a big difference? Nelda makes it sound so simple. “It’s God and God moving in people’s hearts,” she said. This is a congregation that “opens its hearts to anybody and everybody.” Her advice is straightforward and succinct: “Just tell somebody about Jesus!”

Plus, Joveta isn’t shy about asking for help. Her to-do list on a recent Wednesday included recruiting visits to two Kennedale banks whose employees log community service hours. Weekly, she collects day-old bread donated by Panera Bread and gathers more food from the Fort Worth Hope Center (Without Walls Church) and other sources. She will challenge local eateries to match a recent donation of 100 Burger Box gifts cards to distribute. As the soup kitchen gains visibility, donations of food and money come from a variety of sources, including Kennedale FUMC members, other local churches and individuals who hear about the ministry and are moved to write a check. There is no shortage of dedicated volunteers – most, but not all, from the church itself.

If you’d like to help support the soup kitchen, send your donation to Kennedale FUMC, P.O. Box 146, Kennedale TX 76060 or stop by the church – street address 229 W. 4th Street -- between 10 a.m. and 2 p.m. on Tuesdays and Wednesdays or its adjacent Mission Resale Store, open from 10 to 2 Thursdays through Saturdays. For more information, contact jovetaskitchen@gmail.com, or soupkit543@gmail.com or access Soup Kitchen Kennedale or Kennedale FUMC on Facebook.

*Susan is an Area Administrator for the Central Texas Conference Service Center and a regular contributor to ctcumc.org.

**Laurie is a "volunteer extraordinaire" with the Kennedale FUMC Soup Kitchen..