God Squad Gatherings Generate Quite a Crowd in Moody 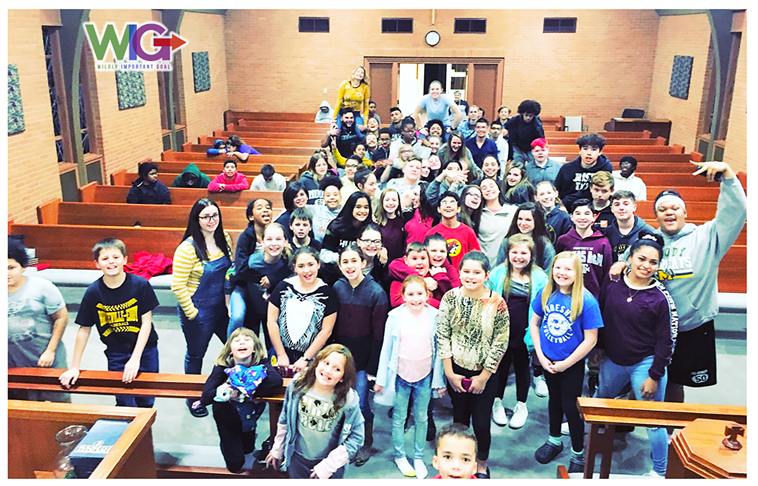 The First United Methodist Church is the place to be on Wednesday evenings if you’re between the ages of 9 and 18 in Moody, Texas. There’s a group at Moody First called The God Squad, which gathers for a home-cooked meal, Bible study, worship and fellowship. It’s a group that is growing by leaps and bounds.

Moody is a small town near Waco. The two United Methodist churches there – Moody First and Moody Leon – pool their resources and personnel to minister to 60 or more kids every Wednesday. Eighty-four was the head count on the last Wednesday of February. By contrast, this same youth group drew an average of 30 in 2015.

Most of the youth are unchurched when they arrive, but they are eager to learn about God, according to Rev. Josh Pruett, who pastors the two-point charge in Moody. “I think they come for a lot of different reasons, and they stay because we listen to them and meet them where they are. They know it’s a safe place where they’re going to be loved, and God keeps them there.”

Josh said he utilizes a Bible study that’s pretty basic because he knows this is a starting point for most. “Essentially, I treat youth group as one big confirmation class,” he said. The younger children are in one group, and those in grades 6 to 12 are in another. The discipling process has resulted in numerous professions of faith and baptisms, seven of each within the last 10 days of February alone. Notably, the parent of a God Squad youth was among that group, an indication that inroads are gradually being made in that direction.

The Wednesday gathering might best be described as a faith community. For most of these kids, it’s the only worship service or Bible study they attend. Attempts to draw them in on Sundays are ongoing but largely unsuccessful so far, Josh said. “That’s why we treat this as their worship service.”

These Wednesday evenings require plenty of patience and tend to be exhausting. It’s a contemporary service. The music is loud, and some of the kids are a little unruly. Josh prepares his volunteers accordingly. “We make them behave, but we’re not going to rap their knuckles with a ruler,” he joked. “They’re here; they need to be here; and we want them here.”

The God Squad is a labor of love, the result of prayer and hard work. Josh insists on giving credit where credit is due. “This is to God’s glory, not mine,” he said. “I’m just a servant trying to keep up with God.”