Gifts and Graces (from Unlikely Places) 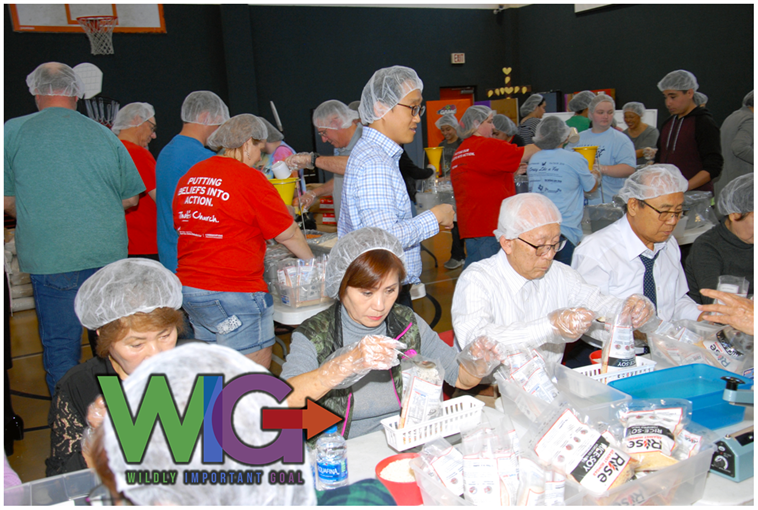 How does a beloved member of a local church’s passing lead into providing 20,000 meals for people across the globe? Maybe not the way you are expecting. Please read the following tale of true discipleship, community, relationship building, faith and answered prayer from Rev. John Han and see that sometimes, gifts and graces come from unexpected places.

Palm Sunday 2019 was the perfect occasion for the people of St. Luke United Methodist Church in Killeen to “serve witness to Christ’s love,” says Rev. John Han, St. Luke’s pastor since early November 2018. St. Luke Killeen, one of the CTC’s vibrant Korean congregations, partnered for the first time with Rise Against Hunger to pack meals “for those who are in hunger all over the world,” according to John.

Initial funding for the meal-packing project was collected the first Sunday in March during a celebration of the church’s 42nd anniversary. The special offering took in more than $4,000, which is enough to package 10,000 or more meals. “We collected the special offering to share with others God’s amazing love, which has allowed St. Luke to grow abundantly for 42 years,” Rev. Han recalled.

The congregation wasn’t content to stop there, though. They prayed for the ability to increase the number of meals to 20,000. That’s when the unexpected happened.

Around the middle of March, Un Suk Deroune, a beloved, active and faithful member of the church, died. She had battled health issues for a while and, sadly, she had no family nor means for her own end-of-life expenses. “The decision was made that the church would cover all costs related to her funeral – a generous gift, to be sure,” said John.

The memorial service went smoothly and was well received. During the service, a special offering was received to help offset expenses. About $6,000 was collected, which was more than enough to cover all the relevant memorial costs, with funds to spare. “The church decided to use the rest of the offering towards funding the meal packaging event by adding 10,000 meals more in loving memory of Mrs. Deroune,” reported Rev. Han.

The church hosted the meal packaging event with “about 130 disciples of Jesus Christ to share the good news of the risen King with others” on Palm Sunday. In doing so, the congregation reached out to the community, and, as a result, members of the Killeen Korean Association and the youth group from nearby FUMC Nolanville came to help fill those 20,000 meal kits in under two hours.

The youth group had some experience in stacking cans and collecting non-perishables but had never been part of a hunger project of such global scope, according to Rev. Patricia Warden, Nolanville pastor. “It was a really good experience,” she said. “The kids were amazed that it took less than two hours to fill 20,000 little bags that would feed so many people.”

Besides the obvious rewards of community service, relationship-building was an added benefit. Students from both churches travel the same discipleship journey, and some attend the same school. “They had seen each other in the hall but had never talked church before,” Pastor Warden says. This project has “rippled out” over the past couple of weeks into a lot of great conversations at school.

Pastor Han was also pleased with the way the workday went. “Witnessing is one of the core values of St. Luke,” he says. “This is a great way to witness to Christ’s love. We are very excited to have had this event. God made us abundant!”