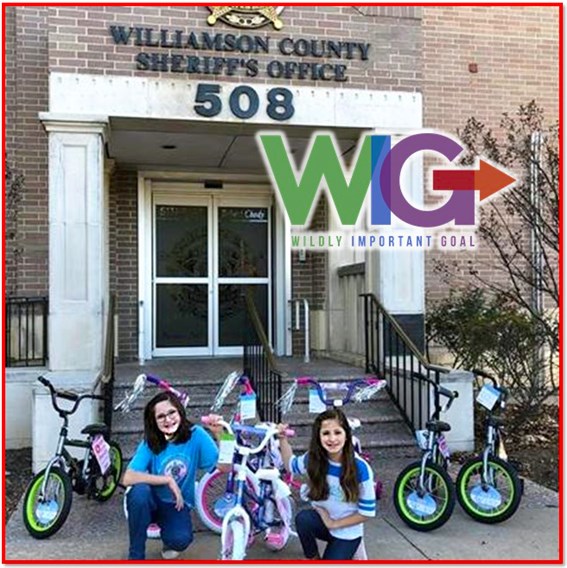 A tale of transformational discipleship within a Georgetown family, this story first appeared in the January 2019 issue of First Edition, FUMC Georgetown’s monthly newsletter. Learn how the Guerras go about “paying it forward.” And don’t stop reading until the end…that’s when the goosebumps appear.

An FUMC Georgetown family is living out and sharing God’s love everywhere they go.

Tara Guerra took her love of baking Bundt cakes and her daughter Emerson’s desire to serve her community and created Tuesday Treats. Together they sell mini-Bundt cakes in a single flavor every Tuesday. Emerson picks the flavor and helps Tara bake and deliver the cakes. The Guerras spend Monday nights as a family baking, boxing and labeling between 24 and 72 cakes. They sell each cake for $6 and give 50 percent of the sales (i.e. 100 percent of the profit) to a different charity each month. Since May of 2018, Emerson has raised money for the WILCO Animal Shelter, Ronald McDonald House, Alex’s Lemonade Stand, a local family suffering a loss in her school community, the Dog Alliance and her school. In total, Emerson has raised nearly $3,500 in seven months – one tiny cake at a time.
“I’m constantly reminded by this Tuesday tradition that God can do more than we ask or imagine,” said Tara. “It has been a labor of love that has blessed us tenfold. It has been so fun to visit each charity to present our donation and see the ripple effect of #haveasliceanddosomethingnice.”

Brown Santa, a Williamson County Sherriff’s Department charity that benefits children, was also a recipient of the Guerras’ generosity this year. The Guerras set a goal of buying six bikes for Brown Santa. Due to the many cake orders, they were able to buy seven! (see photo above) We asked Tara why they chose bikes to donate to Brown Santa.

Tara responded, “Can I tell you a story? Four years ago, Michael lost his job a month before Christmas.  We were devastated and unprepared, especially given the season. He was at Walmart on Christmas Eve, wishing he could buy a bike for Emerson like she’d wanted, but prepared to settle for a new bike bell and basket instead. A man with a white beard, wearing red suspenders, stopped beside him and asked if he was okay. He explained the situation to what he thought was just a kind, listening ear. Instead, the man said, “Well, that won’t do now.” And he proceeded to buy Emerson a shiny red bike she still rides today. That experience touched me in a way I will never fully be able to explain. I promised we’d pass that kindness forward.”


*Tiffany Gibson is the director of communications at FUMC Georgetown.