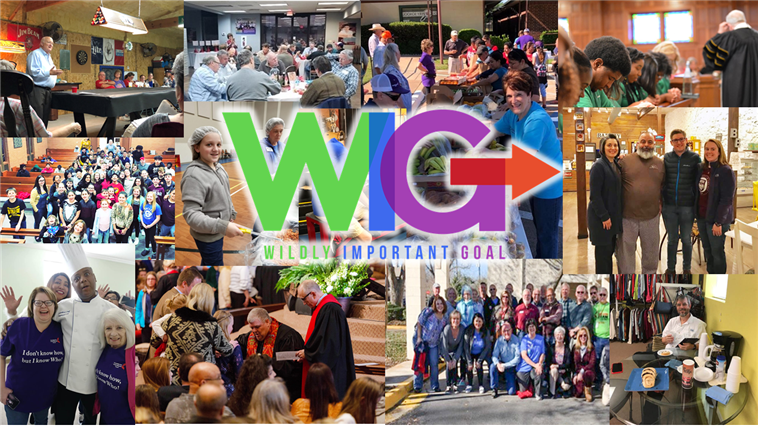 The numbers are in and the story they tell is a story of unprecedented growth across the Central Texas Conference. After detailed reviews by each district of the data reported into EZRA as part of the end-of-year checkout process, Jeff Roper, executive director, Roberts Center for Leadership and Administration, announced that the local churches of the Central Texas Conference grew their average worship attendance by 4 percent compared to 2017 totals. Jeff compiles the data submitted each month by the local churches into VitalSigns and provides monthly reports on the progress of the WIG efforts to the rest of the Cabinet.

“Great things are happening – the Spirit is moving us forward!” Jeff exclaimed. “This is the highest one-year growth in average weekly worship attendance that our Conference has ever had going back to 1974 -the oldest EZRA data available to us.” 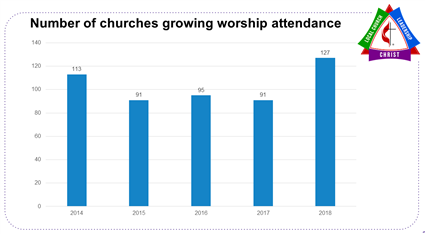 hile 4 percent growth may not sound all that impressive to some, it may help to realize that, according to MissionInsite, the overall population of the counties that make up the Central Texas Conference only grew at a 2 percent rate in 2018. Which, of course, makes the CTC’s 4 percent growth rate 100 percent more.

Each CTC District grew in 2018, with the majority of the districts achieving or exceeding the goals set at the start of 2018. The growth was widespread across the CTC’s local churches with 44 percent reporting some level of growth in 2018. Churches that have launched New Faith Communities continue to lead the way in terms of growing average worship attendance. Churches that received NFC grants grew at 8 percent in 2018 – twice the rate of the conference.

In a little more than a year, the CTC has partnered with local churches to begin 34 New Faith Communities, including providing the $10,000 grant. Plus, there are many churches – 11 that the Smith Center for Evangelism, Missions and Church Growth is tracking – that began an NFC without applying for a grant. “We’ve discovered that the churches that have begun NFCs have an overall worship attendance increase of more than 5 percent and an increase in budget giving of close to 8 percent,” reported Rev. Mike Ramsdell, executive director for the Smith Center for Evangelism, Missions and Church Growth. “Thanks to each church that is working so hard to be faithful to the command of Jesus to make disciples. These numbers reflect the narratives we are hearing. We are reaching people we were not already reaching. This is a big deal.”

And that’s only half the exciting news… 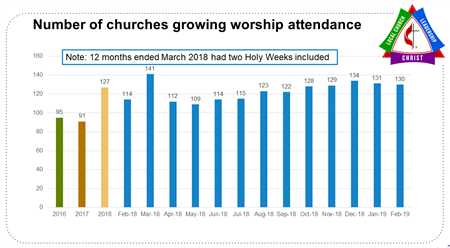 Shortly after the District Superintendents and Administrators completed their due diligence on the 2018 data, the VitalSigns report for February was finalized and showed that the conference’s growth trend continued for a 13th straight month. This is an important milestone because it means due to our focus on the WIG, we have seen growth on top of growth. February 2018 was the first month we showed growth in average weekly worship attendance.

“There are two things very difficult for a declining organization to do,” explained Jeff. “The first (which we have already done) is to halt the decline and start to grow. The second is to keep growing when the prior year comparison period was a growth month – showing ‘growth on growth.’” 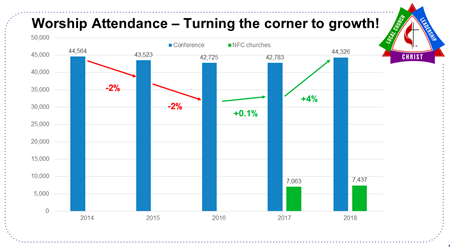 The WIG, or Wildly Important Goal to make disciples of Jesus Christ for the transformation of the world, along with our intentional focus on developing New Faith Communities was officially launched at the 2017 Central Texas Annual Conference. In the short time since the close of AC17, in just 18 months, the churches of the CTC have reversed the decline experienced during the previous three years and average worship attendance is already back to where it was in 2014. Should this rate of average growth continue each year, the conference will exceed the lofty goals set by AC17 for 2026.

“This is tremendous accomplishment that should be celebrated throughout the conference,” said Bishop Mike Lowry. “This was a goal that some thought to be unattainable – and most thought would take much longer to accomplish. God. in Christ, through the Holy Spirit is guiding us to reach out in great faithfulness. When we remain faithful to Christ and stay focused on our mission/WIG, we reach new people in new ways.”

Of course, healthy metrics and increased worship attendance numbers are not the goal. The real impact of the WIG is seen in the narratives of lives being changed, of disciples being made at our local churches. (You can see some of these narratives at ctcumc.org/WIGstories). Also, according to Bishop Lowry, as our average worship attendance continues to rise, we are also documenting that missional engagement is on the rise with “the hungry, hurting and homeless.”

“This is an ‘intended consequence’ of focusing on the WIG of making disciples of Jesus Christ,” wrote Bishop Lowry in a recent blog post. “Another insight is similar. As average worship attendance rises, we are now able to document a rise in spiritual formation (prayer, Bible study, etc.) This is another tremendous significant consequence!”

Mike Ford, Central Texas Conference Lay Leader, believes that we are just beginning to scratch the surface of what these “intended consequences” can do in terms of local churches making disciples.

“We are just starting to see how much and how fast we can move the needle when we all – laity and clergy alike – are focused on and engaged in our WIG efforts,” Mike commented. “Laity have realized that there IS a ‘formula’ for growth that actively partners laity and clergy – something we’ll really be digging into at our Laity Summit this June.”

Another intended consequence of the WIG was/is how members of the Central Texas Conference, think and talk about the church. “The CTC is in a new season. Together, we have changed the conversation,” observed Rev. Ramsdell. “By celebrating the hard work and faithfulness of so many of our churches, leaders and pastors, we are no longer talking about the long-term decline in worship attendance in our conference and The United Methodist Church. We are now talking about how we are growing, doing new things, reaching new people, beginning new faith communities.

“It is a special season and one worthy of celebration,” Mike continued. “God is at work in this simple idea, making disciples of all the world by doing new things to reach new people.”

While enthusiastically joining in the celebration of what has been accomplished to date due to the conference’s focus on the WIG, Clifton Howard, assistant to the Bishop and Conference Secretary, echoed what many pastors and lay leadership have made sure to remind during the WIG journey – any and all the glory belongs to The Lord. “As we do our part ‘planting and watering’ to achieve the WIG, God is causing the good growth,” remarked Clifton. “May we continue to glorify Christ in our efforts to accomplish the WIG.”

For more on the WIG, including the latest WIG Stories, visit ctcumc.org/WIG.