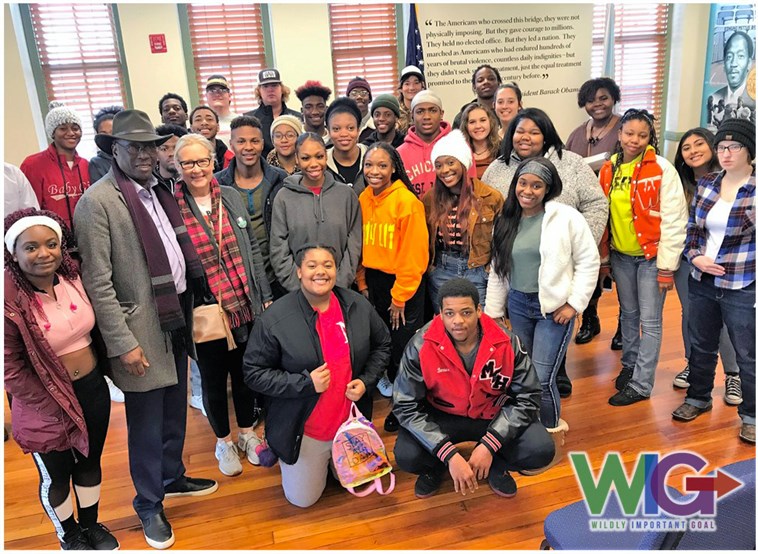 About 30 students active in the UCF Wesley Foundation at Navarro College carry a reminder of their recent Civil Rights Pilgrimage in the form of a tiny chunk of crumbled concrete. These “pebbles” also provide a bigger challenge – a commitment to be advocates of social justice.

“We all walked away with a little pebble and a big calling on our lives,” said Rev. Meredith Bell, director of campus ministry at the Wesley Foundation that serves the two-year college in Corsicana.

The Civil Rights Pilgrimage is part of the discipleship journey the students take as they become active Christians and active leaders, Meredith said. The pilgrimage helps to foster an awareness that if they really want to effect change, “they need to be organized and they need to be tenacious.”

The pebbles challenge came courtesy of Joanna Bland, a tour guide in Selma, Ala. She took the students to a site where Rev. Dr. Martin Luther King, Jr. and other civil rights leaders met to plan a march from Selma to Montgomery. She asked the students to pick up a piece of broken pavement there and be reminded that they, too, can be leaders in pursuit of justice and equality. 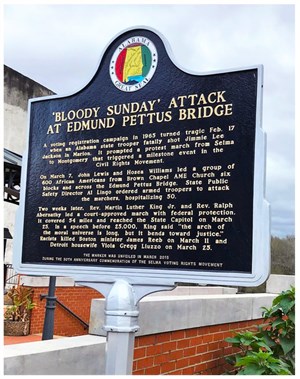 Mrs. Bland was just a girl on March 7, 1965, which came to be known as “Bloody Sunday.” She was in Selma on that terrifying day when demonstrators were met – and beaten – by state troopers as they began to cross the Edmund Pettus Bridge. Joanna shared that she was “literally running for her life,” Meredith said, and that she has a vivid memory of a woman whose head hit the pavement after being struck by a law enforcement officer on horseback.

According to Meredith, personal testimonies like Joanna’s made a big impression on the Navarro students, and that the students made a quick connection to the violence we see every day and “how it contributes to our downfall” versus the power of nonviolent resistance.

Though the Civil Rights Pilgrimage took place last December, February (Black History Month) is a good time to go online and explore the sites the students visited. Included on the itinerary were the Civil Rights Memorial Center, the Legacy Museum and the National Memorial for Peace and Justice in Montgomery, Ala.; the National Voting Rights Museum & Institute at the foot of the Edmund Pettus Bridge in Selma; the Smith Robertson Museum & Cultural Center and Medgar Evers Home Museum in Jackson, Miss.; and Dexter Avenue King Memorial Baptist Church for Sunday worship in Montgomery.

On their visit to the Voting Rights Museum, the Navarro students had a chance encounter with Charles Bonner (pictured above with Navarro students at the Voting Rights Museum). Now a resident of San Francisco, Mr. Bonner happened to tour the museum the same day they did. Charles was a 16-year-old in Selma on Bloody Sunday. He had been there for months, receiving training from civil rights leaders in nonviolent resistance. He took the time to speak with the students about drawing from positive energy to have the courage and strength to choose love over hate.

The Navarro group is one of six Wesley foundations located in the Central Texas Conference, all of which are dedicated to “raising up a new generation of leaders for the sake of the Church and the world,” as put by Rev. Joseph Nader in the 2018 Campus Ministry Report. Joseph, now in his first year as pastor of Weatherford FUMC, was director of the UTA Wesley for nine years and doubled as coordinator of campus ministry from 2014 through last June.

Meredith credits Rev. Nader with teaching her that campus ministry has very little time to make an impression on students. “You have to get to the point quickly,” she said, “and that’s what we do.”

Several years ago, the Navarro Wesley established a dynamic Christian Leadership Center with an emphasis on small groups, mission work, internships and other opportunities. Not only are churches in the area involved in the program, the center also has generated broad-based, community-wide support.

Amplified, a student-led worship service on campus Tuesday evenings, was created in 2017. Average worship attendance has grown from 12 that first year to between 50 and 60 today. Forty-two students have registered for an upcoming All Campus Wesley retreat. Five help direct the Wesley as student interns. These are big numbers for campus ministry at a two-year school and all represent how the Navarro Wesley is building Christian leaders and disciples for the future of the church.

Rev. Paul Massingill describes the Navarro Wesley as “a dynamic and extremely diverse ministry that is creatively forming Christian leaders.” Paul began his work as conference coordinator of campus ministry and emerging leaders last July. He is the former director of the TCU Wesley.

Three of the Navarro Wesley faithful have gotten involved in ministry during the three and a half years Meredith has served as its director. Antinaya Higgins works in youth and young adult ministry at Hillsboro FUMC, Sean Cofer leads contemporary worship at Corsicana FUMC and Alexis Enriquez is a part-time youth ministry program director for a Covenant Parish in the formative stages within the Central District. Its objective is to “touch the hearts of those who are marginalized,” she said, and “to share Jesus’ love any way we can.”

Alexis, a sophomore, was on the Civil Rights Pilgrimage for the second time. It was a diverse group traveling together, she said, including some students who weren’t already part of the Wesley – but they are now. “We all meshed together. It was a really great bonding experience.”

The lessons she learned from those of other backgrounds, races and generations have led Alexis to believe she will be a more effective leader than she ever imagined. “There was so much to soak in,” she said.

The eldest of six children and a long line of cousins, Alexis knows she’s positioned to be a role model. “I definitely want to become a better me,” she said. Acknowledging she’s in a period of discernment, her response to the call upon her life is, “’Okay, God, I’ve gotten this far. Where to next?’”

Making an instant connection between Dr. King and Jesus Christ

William Washington, who is in his second year at Navarro, described the pilgrimage experience as mind-blowing. “It’s changed my perspective on life almost completely,” he said. “It actually helped me with an issue I was having.”

He soft-pedaled his internal struggle by putting it like this: “How do you deal with rude people without being negative to them back?” Being self-critical and always wanting to “be the best me,” he said, brought him to the realization that he needed to resolve that issue within himself by shaping a positive manner of response.

While on the pilgrimage, William said he made an instant connection between Rev. Martin Luther King and Jesus Christ in the grace-filled way they handled themselves in the face of adversity. “When I got my answer,” he said, “I knew that my being here was for a reason . . . It was unreal.

“Martin Luther King remained who he was without having to fight with negativity and violence,” he said, and now William seeks to place himself in others’ shoes and choose kindness.

It’s the kind of connection Meredith celebrates. One of the joys of campus ministry is watching students embrace the opportunity to change their direction in life, she said, “and that simply makes me love them more.”