An Amazing Time of Ministry in the Name of Jesus Christ 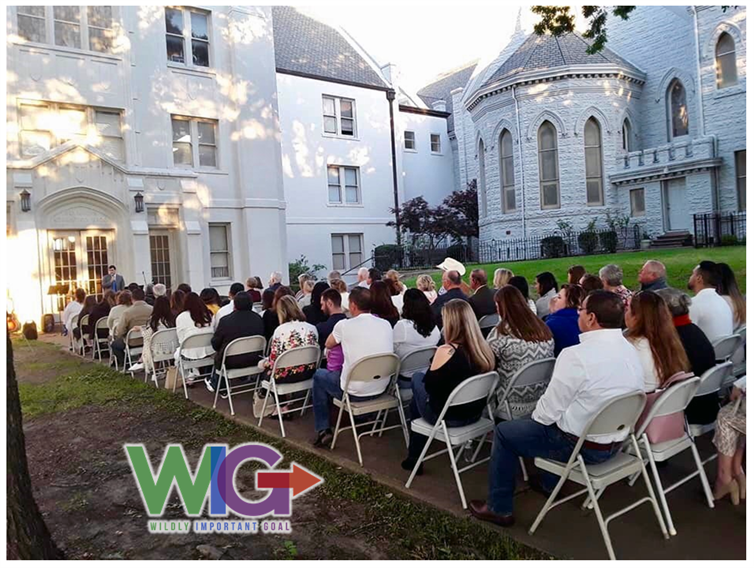 Timing is everything – especially when you have a dozen services planned for Holy Week – each with several moving parts and intricacies. So, you can imagine the consternation of the staff and volunteers at FUMC Corsicana when a brand new, galvanized water tank – just the right size for baptism by immersion – began to leak during its testing phase on Easter Saturday. And that anxiety was multiplied by the fact that the leak was discovered just 10 minutes before the nearest Tractor Supply closed for the weekend!

Cue Philippians 4:6, for it turned out that there was no need to be anxious about anything. The leak, which was detected in the nick of time, turned out to ostensibly be the only snag in a stream of worship services, 12 in all, that began with a Last Supper service on Maundy Thursday and continued through the following Wednesday.

The daunting schedule for the week offers a fine example of church, reimagined, and an eagerness to connect with the community.

“It was a well-orchestrated series of events, and timing was everything,” said Dr. Steven Bell, senior pastor, First United Methodist Church of Corsicana. “Holy Week at First Corsicana was an amazing time of ministry in the name of Jesus Christ!

“Our collective worship attendance from these 12 services, along with our online attendees, was 1,011,” Dr. Bell continued. “This is the first time, to our knowledge, for FUMC - a congregation birthed in 1851 - to break 1,000 in worship. Praise God for all of those being touched by the Gospel!”

According to Dr. Bell, there were three services on Good Friday alone: the Spanish-speaking Iglesia Jeme congregation hosted a foot-washing service in the newly renovated Great Hall, along with a dramatic retelling of Jesus’ passion and Seven Words from the Cross; the Chancel Choir led “The Weeping Tree,” a powerful service of music and scripture; and “some of our friends who are Messianic Jews” led a Seder Passover Service.

x worship services on Easter Sunday began with a service outdoors at sunrise (see photo at top), followed by a service of baptism by immersion in the newly replaced, non-leaking, galvanized tank, which Pastor Bell described as “beautifully draped with a cloth and surrounded by Easter lilies.” Two adults took the opportunity to reaffirm their faith, and 10 youth and older children, mostly Iglesia Jeme worshippers, professed their faith in Jesus Christ for the first time. In addition, one infant baptism was celebrated.

Also included in the Easter Sunday lineup were two traditional services and two contemporary services – one in Spanish (Iglesia Jeme) and one in English (The Current). The last of the 12 services that week were Amplified (on the campus of Navarro College) and Overflow, a youth worship service.

Why the full immersion on Easter Sunday? Dr. Bell says, “A big sacrament points to a big God.”

The tiring yet invigorating events of the week tugged at not only Dr. Bell’s heartstrings but also those of associate pastors Zach Stiefel and Martin Orozco, who relished the chance to baptize his grandson, Andrew.

Celebrating faith commitments and baptisms on Easter Sunday made for a great morning, Dr. Bell said. “Pastor Orozco said to me, ‘I couldn’t stop crying on Easter Sunday. I cried all day long because it was so beautiful.’”

For more about Corsicana FUMC, click on the church's Facebook page, where you’ll also find pictures of the eight young disciples who professed their faith on Confirmation Sunday, May 5.