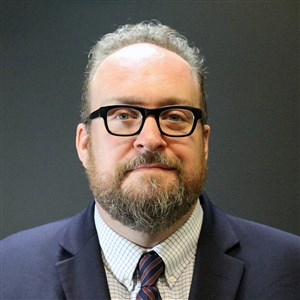 To fill the finance and administration oversight roles created by Jeff Roper's retirement effective July 1, 2022, Bishop Saenz decided to employ the services of someone he and many in The UMC Connection have known and collaborated for many years, Mr. Scott Brewer. Scott currently serves as the Treasurer and Director of Administrative Services for the Great Plains Conference.

Scott has been working and serving in the United Methodist Connection as a lay person for close to 20 years. Currently, he is the Treasure and Director of Administrative Services for the Great Plains Conference (GPC) of The United Methodist Church. Prior to joining the GPC in 2016, Scott worked for The UMC General Council on Finance and Administration (GCFA) for more than 12 years and the Global Board of Higher Education & Ministry (GBHEM) for two.
Scott started as an administrative assistant at GCFA and worked his way up the ranks to become the Associate General Secretary before moving to GBHEM, also as an associate general secretary, “Sort of a Chief Operating Officer (COO),” reports Scott. In 2016, the opportunity to return to and work for the Great Plains Conference – his home conference – came up and he jumped at the chance.
Scott is married to Allison. The couple live in Topeka, Kansas with their two children (ages 6 and 9). Both he and Allison grew up in Nebraska, where his parents both served as elders in The UMC before retiring in 2014.
Scott has a BA in Sociology & Anthropology from Nebraska Wesleyan University and a Master of Arts in Communication and Leadership from Washburn University.
Roberts Center for Leadership and Administration