A video replay of Bishop Russell's Sept. 9 Memorial Service from First UMC - Fort Worth is available below.

Bishop John William Russell passed away Friday Sept. 2, 2022, at the Reunion Court of the Woodlands, Texas. He was 96. Bishop Russell served as the Central Texas Conference’s inaugural episcopal leader when the South Central Jurisdiction split the Dallas/Ft. Worth Episcopal area and formed the Central Texas Conference in 1988 – an assignment from which he retired in 1992 – after serving as bishop of combined Dallas/Ft. Worth episcopal area from 1980-88.

“While I unfortunately never had the pleasure to get to know Bishop Russell personally, his reputation as an affirming, pastoral and solidly United Methodist leader during a time of transition for the conference is well known,” said Bishop Ruben Saenz, resident bishop of the Central Texas Conference. “Whenever the Cabinet is together at the Conference Service Center, we meet in the Russell Cabinet Room. 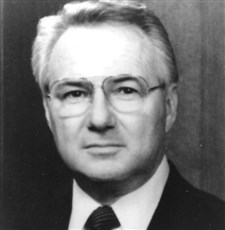 “I also understand that he brought a wonderful sense of humor to his ministry and was generally regarded as ‘the Building Pastor’ because of all the successful major building projects undertaken during his time serving local churches. Our conference and the UM connection are grateful for his and Mary Jean’s exemplary service and ministry.”

Bishop Russell was born June 19, 1926, in Abilene, Texas, to Rev. Virgel Russell, a Methodist minister, and his wife Louise Hayden Russell. The family eventually moved to Oklahoma, and while attending high school in Anadarko, Oklahoma, John met Mary Jean Garrett. Following his high school graduation in 1944, and a tour in the Army serving in Japan in WWII, John and Mary Jean wed on Dec. 26, 1947. It was the beginning of a life of dedication and service to God and the Methodist Church that would span a period of more than forty years. 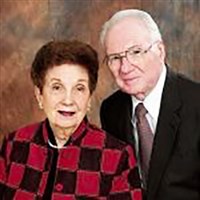 John and Mary Jean were married for 71 years, ending only upon Mary Jean's death the day after their anniversary in 2018. The union was blessed with three children: Mary Margaret, Deborah Ann and John Garrett.

“Bishop Russell and Mary Jean were in worship at First Fort Worth every Sunday for as long as they were physically able,” remembered Dr. Tim Bruster, current director of director of Finance and Administrative Services for the Central Texas Conference, who served as their senior pastor at First Fort Worth for many years. “I could always count on them being in their spot to my right. They were a vital part of the spiritual and social life of our church and their Sunday School class.

“Bishop Russell was a very gentle, loving and pastoral person, who brought a keen sense of humor to any situation,” continued Tim. “You knew you were in for a chuckle when he was around because he’d always get this ‘look’ on his face just before he’d crack a joke. He and Mary Jean were wonderful members of First Fort Worth and our conference. Our prayers are with his family during this time.”

For all his professional ministry accomplishments, John was first a warm, generous, and compassionate family man. Known affectionately as "Bam Bam" to his grandchildren, he delighted in taking family vacations, usually to the mountains of New Mexico and Colorado where he could engage in stream fishing – one of his passions. He was a patient and relentless stalker of rainbow, cutthroat, golden and brown trout, and encouraged all his children and grandchildren to engage in the pursuit. There are home movies, photos and such going back more than half a century to prove it according to his family.

Another of his passions was the University of Oklahoma football team. While he usually was able to keep his passion for OU football from becoming insufferable, according to his family, you did not want to disturb Bishop Russell when a Sooner game was in progress.

Bishop John Russell graduated from Oklahoma City University in 1949 with a BA Degree, and in 1952 from Perkins School of Theology, Southern Methodist University, with a Bachelor of Divinity Degree, whereupon he was ordained an Elder in the Methodist Church. He subsequently received a Doctor of Divinity from Oklahoma City University and a Doctor of Humanities from Texas Wesleyan University. He is survived by a sister, Louise Ann Russell of Colorado; daughters Mary Margaret Layton and her husband Bill of The Woodlands, Texas; Deborah Ann Cordaro, and her husband Louis, of Shreveport, Louisiana; granddaughters Melissa Kathleen Layton of Bryan, Texas, and Meredith Marie Layton and her husband James Mason, and their son, John's great grandson, William Osborne Mason, all of Clear Lake City, Texas; and his adopted grandson, William Russell Layton (and his children Jessica and Joseph) of Arlington, Virginia.

He was preceded in death by his parents, Virgel and Louise, his wife Mary Jean and their son John Garrett Russell, and a brother Wylie H. Russell.

In lieu of flowers, the family would prefer donations be given to the First United Methodist Church of Fort Worth, or the charity of your choice, in memory of John William Russell.

Please click on the below to view a replay of the memorial service.

Video courtesy of First UMC of Fort Worth. Thank you very much FUMC-FW media team for livestreaming the service.