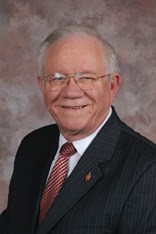 Bishop Ben Chamness passed on to the Church Triumphant through the resurrection of our Lord at 3:01 p.m., Saturday, Dec. 22. Bishop Lowry, who was immediately preceded as the episcopal leader of the Central Texas Conference by Bishop Chamness, is asking all members of the Central Texas Conference, and people of faith everywhere to join him in prayers of peace and healing for his wife Joye and the entire Chamness family and of gratitude for the lifetime of service shared by Bishop Chamness.

“Bishop Ben Chamness was a true man of God,” stated Bishop Lowry. “We in the Central Texas Conference have been deeply blessed by the leadership he provided as resident Bishop from 2000 – 2008. Throughout his tenure he showed a quiet faithfulness and commitment to the cause of Christ and of His Church.”

“On a more personal level,” Bishop Lowry continued, “Jolynn and I were greatly blessed by Ben and Joye Chamness for the kindness shown to us in the transition to new Bishop, as well as by their on-going encouragement and friendship. Along with the entire Central Texas Conference, we give thanks for this true servant of the Lord and offer continuing gratitude for his kindness, leadership, service and dedicated faithfulness.”

Bishop Chamness’ active ministry in the United Methodist Church spanned five decades. Ordained a deacon and an elder by Bishop Paul Martin, served the Texas Conference (Houston episcopal area) for more than 37 years, including a four-year period as the Houston Northwest District Superintendent. His role as DS ended in 2000, when he was elected to the episcopacy by the 2000 South Central Jurisdictional Conference and appointed to the Fort Worth episcopal area, where he served until his retirement in 2008. During his 37 years of ministry in the Texas Conference, he served local churches of all sizes and locations. His appointments included Mt. Hope Circuit, Panola County Rural Work, Diana Circuit, Avinger, Maud, Jacinto City, FUMC Missouri City, United Methodist Temple in Port Arthur and Marvin UMC in Tyler.

Bishop Chamness was at the helm of the Central Texas Conference when Fort Worth played host to the 2008 General Conference. In welcoming the delegates, he said, “Nothing pleases us more than to have our United Methodist friends here with us.” Besides being the consummate host, Bishop Chamness also championed a pension fund initiative at GC08 that proved crucial to retired pastors in areas outside the United States.

As chair of Pension and Health Benefits from 2004-2008, he challenged the delegates to contribute to the initiative, to help meet its $20 million fund-raising goal so pastors and lay staff in other countries could retire with dignity and an adequate income. At that time only $7.8 million had been raised, but by 2010 the $20 million goal was met. By 2013, according to a timeline on the umc.org website, a pension plan was providing coverage for all UMC clergy and surviving spouses, no matter where in the world they serve. Bishop Chamness said the board considered the pension plan a justice issue. 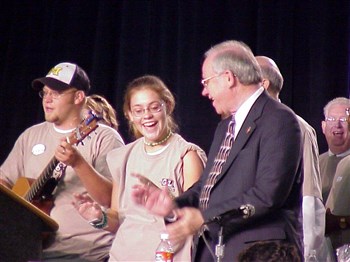 At the 2007 Central Texas Annual Conference, the bishop and his wife, Joye, were instrumental in raising $100,000 for Nothing But Nets, the precursor to the United Methodist Church’s Imagine No Malaria initiative. Mrs. Chamness took the opportunity to honor her husband on their 47th wedding anniversary with a gift of a $10 net for every year of their marriage. The gift so moved the members of Annual Conference that it sparked a giving frenzy, resulting in one of the biggest special offerings ever received at a CTC Annual Conference.

Though he had been retired since 2008, he was pressed into service as an interim bishop for one year beginning in September 2011 in the Nashville Episcopal Area, which includes the Memphis and Tennessee Conferences. This led Bishop Lowry to comment light-heartedly in a May 2011 blog that the CTC was “sending a missionary to the Nashville area.”

In the year before he retired, Bishop Chamness spent some time in reflection on things he might have done differently. The result was 15 chapters on ministry in his book, Notes to New Pastors, published in 2008 by Abingdon Press.

Bishop Chamness was born June 16, 1940 in Carthage, Texas. In 1960 he married Joye Fay Stokes of Henderson, Texas. They have two sons, David (Caroline) and Steve (Edy), and six wonderful grandchildren: Patrick, Courtney, Matthew, Stephen, Christopher and Yvonne. He earned his Doctor of Ministry degree at Drew University and his master of theology degree at SMU’s Perkins School of Theology. He was also a graduate of Centenary College (BA) and held an associate’s degree from Lon Morris College, where he was named a distinguished alumnus and later a trustee.

Besides his appointments in the Texas Conference, and prior to becoming a bishop, he also served as President of the Council on Finance and Administration, as Vice-Chair of the Board of Ministry, and as a member of many other committees and boards in the Texas Conference, president of the South Central Jurisdictional Council on Finance and Administration from 1992-96 and as a member of the Jurisdictional Executive Committee. He was elected to General Conferences in 1988, 1996 and 2000 and as a delegate to Jurisdictional Conferences from 1984-2000. He also served as a delegate to the World Methodist Conference.

Bishop Joe Wilson, retired episcopal leader of the Central Texas Conference, had been in close contact with and assisting the Chamness family while Bishop Chamness was in hospice.  In an email to close friends and family announcing Bishop Chamness , he said, "Ben's final moments were peaceful. We give thanks that his long journey has ended with a joyous new beginning."
Please watch ctcumc.org for updates on funeral arrangements, which have not been finalized and/or announced as of Sunday, Dec. 23. Condolences may be sent to Mrs. Joye Chamness, 319 Elkins Lake, Huntsville, Texas 77340.
News