Bishop Saenz Comments on His Reassignment to the CTC

Bishop Saenz to be the Episcopal Leader of  the Central Texas and North Texas Conferences.

I am creatively intrigued about the possibilities offered with the two conferences working in union...Our collective impact is going to be greater than it would have been as independent conferences."

The 2022 South Central Jurisdictional Conference (SCJC) has announced that Bishop Ruben Saenz Jr. will be reassigned to the Central Texas Conference. Bishop Saenz has served as the resident bishop of the CTC since January 1, 2022. He has also served as the bishop of the Great Plains Conference during this time – the conference to which he was assigned in 2016 following his episcopal election. Following the announcement of his assignment to the Central and North Texas Conferences, Bishop Saenz was relieved to finally know his episcopal assignment and energized by the opportunities that lie ahead.

“I am very excited about the opportunity to continue the groundwork we have laid in the past year in Central Texas,” acknowledged Bishop Saenz moments after the episcopal announcements had been made. “I see this as an incredible opportunity to reimagine church and reimagine discipleship, and we already have everything we need to do the work. We have spiritual resources, we have financial resources, we have material resources. We have amazing clergy and AMAZING laity who are committed to the future of the United Methodist Church. 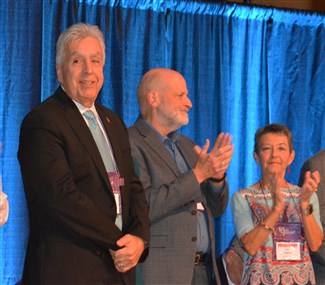 “So I’m ready,” Bishop Saenz continued. “I’m ready to continue the work we’ve begun in the Central Texas Conference and to help resource the leadership so they can be as fruitful and effective as possible. I’m ready to continuously make adjustments and improvements so that we can do things and align our resources for greater effectiveness.”

Bishop Saenz’s wife of 41 years Maye, also a native Texan, was also quite delighted and grateful by the Episcopacy Committee’s discerned decision to assign team Saenz to Central Texas.

“I am creatively intrigued about the possibilities offered with the two conferences working in union and how that is going to create a synergy that’ll allow us to cover more area together with a missional focus,” Bishop Saenz remarked. “This is a good opportunity to continue to reestablish connection between our conferences. It is also an opportunity to reset a new culture for a new day and start thinking about the church NOT as we have known it, but as it will be. We can and will start to imagine a church that is going to vibrant and relevant to our conference mission field today and well into the future.

Of course, the challenge of providing episcopal leadership for two conferences at the same time is nothing new for the native Texan and lifelong Methodist. 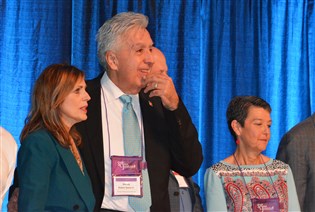 “I’ve done this work before, working with two conferences,” recalled Bishop Saenz. “Before being assigned to provide episcopal leadership in Central Texas, I was able to help create the new Great Plains culture out of three former conferences – the Kansas East, Kansas West and Nebraska conferences. I’m excited about working with the leadership of both conferences to get clear about where God is calling them to go and then to join along with that calling. Our collective impact is going to be greater than it would have been as independent conferences.”

“I sense that the delegates did their work and that people of the Jurisdiction are ready to move forward. Each conference voted their discernment, and these firsts were the result,” said Bishop Saenz. “To me, this is a sign that when people are united, are together in Christ and rooted in love, miracles happen. God moves forward with a lot of power.

“So, for me, I see this as God saying move on, listen to the Spirit and let’s move on.”
Ruben Saenz Jr. is a native of south Texas and lifelong United Methodist. In 2016, he was elected bishop by the South Central Jurisdictional Conference and assigned to the Great Plains Conference, based in Topeka, Kansas. On Jan. 1, 2022, he also assumed the episcopal leadership duties for the Central Texas Conference. In his role as episcopal leader, Bishop Saenz has been a steadying and driving force for the mission of making disciples of Jesus Christ for the transformation of the world during the turbulent times of emerging from COVID and churches discerning to disaffiliate from The UMC.

Bishop Saenz is a graduate of Stephen F. Austin State University in Nacogdoches, Texas, and a former high school teacher, high school football coach, and businessperson. He earned his master’s of divinity and doctorate of ministry degrees from Perkins School of Theology at Southern Methodist University.. As a pastor, he focused his ministry on intentional spiritual practice and formation, developing a lay apostolate, and equipping people with tools and encouragement to move out of generational poverty. In 2010, he was appointed to serve as the Southwest Texas director of congregational and new church development, and he helped start 11 new churches before being appointed to director of conference connectional ministries and executive director of the Rio Texas Conference’s Mission Vitality Center in January 2015. In that role, he oversaw the conference’s missional strategies and objectives for congregational vitality, starting new churches, clergy and lay leadership vitality, uniting people, and transforming communities.

He enjoys drawing and painting landscapes with various mediums, endurance cycling and hi-intensity interval training, fishing and golfing, aromatic and flavorful cups of coffee from different regions of the world, visiting new places, meeting new people, and watching NFL football. He has a growing interest in writing for publication, Meso/South American civilizations, Abraham Lincoln’s presidency, and faith that does justice.Bishop Saenz is married to Mayé. They have four adult children, all active in the life of The United Methodist Church. Two of their sons, Aaron and Ruben III, serve as pastors of growing congregations in the Rio Texas Conference. He and Mayé have nine grandchildren.
News