How Firm the Foundation?

Keeping the Faith on the Campus of Tarleton State University 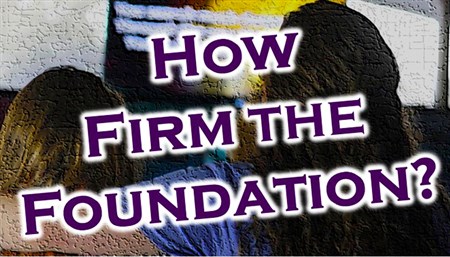 Change is inevitable when a student leaves for college. As early as Thanksgiving break, parents begin to notice the subtle differences in the kid who pulled out of the driveway the previous August. Independence – freedom to choose – is at work. But there’s no reason to worry, right? A solid foundation in the faith was laid early on, wasn’t it? It will hold…my kid’s faith won’t crack under pressure, right?

These are just some of the parental concerns that Rev. David McMinn and the other six directors of campus ministry within the Central Texas Conference work to assuage every day as they work with the students via the ministries of the campus Wesley Foundations. David leads the Wesley Foundation at Tarleton State University in Stephenville. His colleagues direct Wesley Foundations at UT Arlington, TCU, Baylor, Weatherford College, Navarro College and Hill College.

“Our mission,” David says, “is to make disciples of Jesus Christ and raise up a new generation of leaders for the sake of the church and the world.” Of course, even in a college setting, there is no formula or set curriculum in place to make disciples. Each student and circumstance is unique as the following three quick narratives demonstrate. 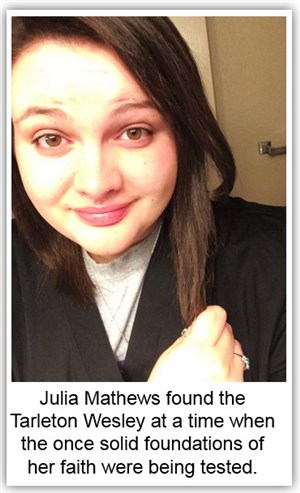 In high school, Julia Mathews was the perfect example of what she thought a Christian should be: she attended a Lutheran church every Sunday; she volunteered for non-profits; she read her Bible and spent time every day talking to God. She felt certain that her faith was solid and unwavering. But when she left home for Tarleton, she began to struggle spiritually. Julia stopped going to church on a regular basis, quit reading the Bible and began to question all she’d been taught. She doubted herself and her religion and experienced the two loneliest, most difficult years of her life.

As her sophomore year ended, Julia was offered a job at a youth camp in Brownwood. Pursuing the opportunity, she says, was the best decision of her life. It pushed her to reconsider her faith and critically examine the poor choices she’d made for two years. Early the next semester, her roommate asked her to come to the Wesley at Tarleton. She was reluctant; after all, she was Lutheran, not Methodist. Her friend insisted it didn’t matter – and she was absolutely correct.

Julia was completely at home from her first visit. The Wesley reminded her of her hometown church. The people are so inviting, she says, and she found herself returning each week. The friends she made encouraged her to chase after God, so contagious is their passion for Christ. She began to open up, David says, and he encouraged her not to settle for “basic salvation,” but to dig deeper into her relationship with God. As time went by, she found herself talking with God and spending time with her Bible again. She’s joined Tarleton’s worship band, she leads a small group and she helps other students deepen their own faith. Her life has fallen back into place.

Wyatt Wilson arrived at Tarleton as a transfer student. He left Southern Nazarene University – and a football scholarship – behind in order to pursue a major in geology, something Tarleton offered and Southern Nazarene didn’t. While he knew he was making the right decision for his chosen career, it meant saying goodbye to a good group of friends and a school where he was comfortable.

Wyatt knew no one at Tarleton. That first semester he didn’t join any organizations and more importantly, he struggled to find a church home. During the spring semester, a friend invited him to the Wesley for Tuesday night Logos Worship. The sense of welcome, the connection were instant. Students here have a common focus, he says, and they’re sincere in their pursuit of Christianity. He was quick to get involved, and his life was soon transformed. Wyatt says he feels closer to God. He spends more time with the Bible, he examines scripture with David, and his prayer life has reached new depths.

About that Logos Worship that drew Wyatt in: he’s a regular there on Tuesday evenings. In fact, he’s generally there to help set up. Now it’s his turn to offer a warm welcome to the Wesley, a chance to build a connection. 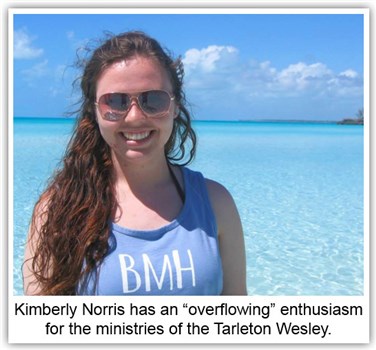 It didn’t take much to persuade Kimberly Norris to visit the Wesley Foundation. Her parents nurtured her in the faith and encouraged, expected, her to be involved in the church where she grew up – St. Barnabas UMC in Arlington. As a young girl, she sat up close each Sunday, often lit the altar candles and regularly helped tidy up after communion. Youth group became a big part of her life, too. She was devoted to it, so it just made sense to join the Wesley last fall as a freshman.

Active in church and passionate about church are often two different things, however, and Kimberly admits her personal commitment to Sunday worship service was somewhat lacking. That changed quickly upon her arrival at the Tarleton Wesley. David says her enthusiasm for the organization is “overflowing.” The friends she’s made supported her through her first semester and immersed her in a Christ-centered environment. She’s a greeter now at the Logos Worship services, and she is communications leader for the Wesley, spreading the word and the welcome through social media.

As she’s become more involved, Kimberly recognizes the important role church plays now – and always has – in her life. She’s independent, she has the freedom to choose, and she chooses to worship.

As David, or any of our campus ministers will confirm, these three examples just scratch the surface of the many different paths students travel on their way to “The Wesley.” It’s their prayer that they all leave out into the world on a path that takes them on a closer walk with God than when they arrive. Julia, Wyatt and Kimberly’s paths are leading them to that closer walk with God. For David McMinn, that’s prayer answered.
News