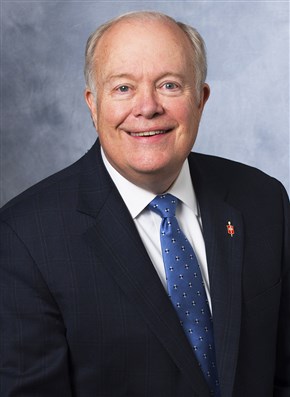 Bishop Michael McKee, episcopal leader of  the North Texas Conference of The United Methodist Church, has been named as the 2017 Distinguished Alumnus of Perkins School of Theology at Southern Methodist University. He will be honored during the annual awards banquet at 5 p.m. Monday, Nov. 13, in the Great Hall of Elizabeth Perkins Prothro Hall on the campus of Southern Methodist University.

Bishop McKee was selected for the award by the Perkins Alumni/ae Council for his demonstrated effectiveness and integrity in service to the church, continuing support and involvement in the goals of Perkins School of Theology and SMU, distinguished service in the wider community and exemplary character.

"Bishop McKee is an outstanding choice for the 2017 Distinguished Alumnus Award," said Perkins Dean Craig C. Hill. "Throughout his ministry, he has been a faithful servant of both The United Methodist Church and Perkins School of Theology, and I – like so many others – have come to rely on his judgment and to count on his assistance. There is no better partner in the work of our school.”

A native of Fort Worth, Bishop McKee’s service to The United Methodist Church, Southern Methodist University and the Perkins School of Theology has spanned almost five decades and has influenced the denomination at the local, regional, national and global levels.

Bishop McKee was ordained as a deacon (1975) and an elder (1979) in the Central Texas Conference. Besides his work as a local church pastor, he served as chair of the annual conference Board of Ordained Ministry, was elected delegate to the General Conference in 2008 and 2012, and was an alternate delegate in 2004. In addition, he was a delegate to South Central Jurisdictional Conferences each quadrennium from 2004-2012.

“I’ve been blessed to work with Bishop McKee in three distinct and significant ways during our respective ministries,” recalled Bishop Mike Lowry, episcopal leader of the Central Texas Conference UMC. “First, we both served as large church pastors before my election as Bishop in 2008. Then, I had the great privilege as serving as his bishop during my first quadrennium – a time that saw him named as the inaugural recipient of the Bishop’s Preaching Excellence Award in 2010. And, of course, since his election to the episcopacy in 2012, I have enjoyed the privilege of working with him as a fellow bishop, which has had the added joy of him serving our sister conference of North Texas.”

“Personally, and on behalf of the entire Central Texas Conference we congratulate Bishop McKee on his much deserved selection as the 2017 outstanding alumni,” Bishop Lowry stated. 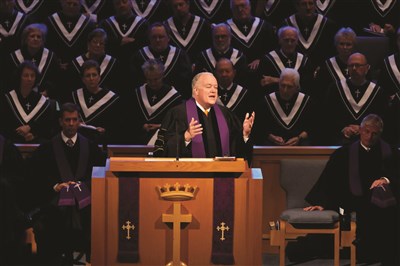 Before being elected to the episcopacy by the South-Central Jurisdiction of the United Methodist Church in 2012, Bishop McKee served several churches of the Central Texas Conference (associate pastor - First UMC in Fort Worth and Richland Hills UMC, senior pastor - Overton Park UMC, Meadowbrook UMC and First UMC Joshua), but the final 15 years as a local church pastor were spent serving as the senior pastor of First UMC Hurst.

Upon learning of the award, Rev. Philip Rhodes, current senior pastor of First UMC Hurst, was elated but not surprised. “There is no one else I know that is more deserving of the Perkins Distinguished Alumni Award than Bishop Mike McKee,” Rev. Rhodes exclaimed.

“He has demonstrated effectiveness and integrity in service to the church, ongoing support and involvement in the goals of Perkins and Southern Methodist University, service in the wider community and does all this with exemplary character,” Rev. Rhodes continued. “All of us at the First United Methodist Church of Hurst, who were recipients of his outstanding leadership for fifteen years, congratulate Bishop McKee on this award.”

“He served the local church with distinction with every congregation he led experiencing significant growth,” he said. “His strong leadership created an exceptional level of respect from his clergy colleagues, as well as countless lay people. He has never shied away from challenges or conflicts that might impede his ability to share the Gospel message through the spoken word and hands-on efforts,” Dr. Robbins said. “Because of that and many other accomplishments, he is more than deserving of this prestigious honor.” 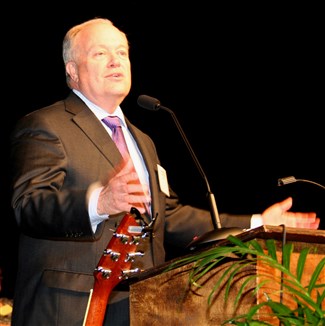 A member of the Board of Trustees of Southern Methodist University since 2012, Bishop McKee has been a member of the Perkins Executive Board since 2004 and currently serves as its chair. He was a member of the Perkins Dean Search Committee in 2016 and was co-chair of the successful Second Century Campaign, which increased financial aid and faculty chair endowments at Perkins School of Theology.

He is president of the Board of the denomination’s General Council on Finance and Administration (GCFA), a member of the Council of Bishops Executive Committee and is immediate past-president of the South Central Jurisdiction College of Bishops. In addition to SMU, he serves on the Boards of Trustees of the Texas Methodist Foundation, Southwestern University, and Methodist Health System, Dallas

Bishop McKee received a Bachelor of Arts degree from the University of Texas at Austin (1973), a Master of Theology from Perkins School of Theology of Southern Methodist University (1978), and was awarded an honorary Doctor of Divinity degree from Texas Wesleyan University (2005).

He is married to Joan (Craig) McKee and they have two adult children: Erin McKee Chidsey, son-in-law Darin, and grandsons Knox and Ford, Los Angeles, California; and Meredith McKee, who lives in Dallas.

Tickets for the awards banquet, which will be held in the Prothro Great Hall of Elizabeth Perkins Prothro Hall on the SMU campus (5901 Bishop Boulevard, Dallas, Texas, 75205), are available for purchase at smu.edu/Perkins/Events/FallConvocation2017/Distinguished-Alumnus-Dinner-and-Award-Presentation.
News