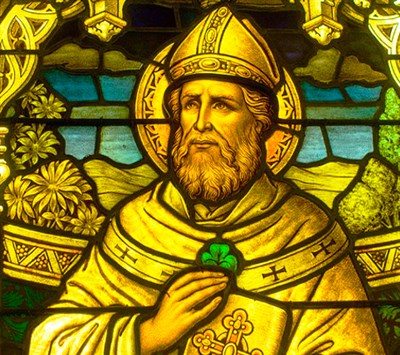 March 17 is the day Americans and many others around the world celebrate all things Irish – in particular the saint for which the day is named. However, did you know that Saint Patrick was not born in Ireland, and his birth name might not even have been Patrick. In fact, many of the well-known “details” of his life are more legend than fact. However, such common misconceptions in no way diminish the vibrant legacy left by the patron saint of Ireland – a legacy that goes far beyond green attire, food and beverage.

But what can modern day United Methodists learn from the fourth century life and ministry of St. Patrick? Quite a bit, it seems.

St. Patrick's commitment to the gospel led him at great personal risk to spread Christianity across Ireland. After his death, Irish missionaries used his methods to re-evangelize Western Europe after the fall of the Roman Empire. When people talk about how the Irish saved civilization, Patrick had a large hand in that – even if his hands were never actually full of snakes that he was forcibly expelling from the Emerald Isle.

The Making of a Saint
The most famous story about St. Patrick - that he drove the snakes out of Ireland - has no basis in history. Scientists have found no evidence that Ireland was ever home to the slithering reptiles, aside from zoos and pets. 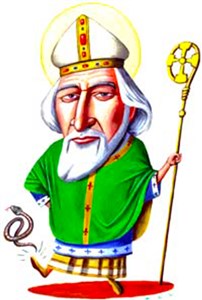 Still, even when heroic tales of expunging serpents are removed from the resume, Patrick’s life was far from boring and routine. Assuming, of course, one does not consider being kidnapped by pirates at 16 and sold into slavery, escaping from slavery six year later, becoming a priest and returning to the land of your captors in order to bring them the love and salvation of Jesus Christ a mundane existence.

The son of a Roman imperial official in Britain, Patrick was born Magonus Sucatus around a.d. 387 (just a few years after Christianity became the official religion of the Roman Empire.)  At about 16, he was kidnapped by Irish pirates who sold him into slavery in their native land. That was his first encounter with the island he would later transform. Prayer, Patrick later recounted, was his main comfort during a lonely captivity tending his master's flocks.

After six years, he managed to escape and eventually made his way to Gaul (modern-day France), where he studied at the monastery founded by St. Martin of Tours. The future saint eventually became known as Patricius, the Latin version of Patrick.

Patrick no doubt drew inspiration from his time at the monastery. St. Martin of Tours was an influential leader in the early church who had demonstrated what was widely thought to be impossible. He started the first widespread Christian movement among the rural people of Europe, those the cosmopolitan Romans called "paganus" (meaning rustic or of the country). From that Latin word comes the English term "pagan.”

Like Martin, Patrick discerned his own calling to share the gospel with pagans - but not in Gaul. In a dream, he heard the Irish people calling out for him to return to the land of his captivity. His bishop shared Patrick's vision with other bishops. Eventually, the pope appointed the former slave to be the first bishop of Ireland.

"As far as we know nobody in history had ever escaped from slavery and voluntarily returned to those who still owned him at great personal risk, loving them and telling them of the high God whom they had only dimly known," said Rev. George Hunter III, distinguished professor of evangelism and church growth at Asbury Theological Seminary and author of The Celtic Way of Evangelism: How Christianity can reach the West...Again. "He loved them, he cared for them and he redeemed them."

Green Evangelism
Christians had some presence in Ireland before Patrick's arrival, but most were expatriates from Britain or the Roman Empire who had little interest in sharing the gospel with the natives. Patrick helped initiate Ireland's first indigenous Christian movement according to Rev. Hunter. One way of doing that was that he preached in the native language, Irish Gaelic

Another method of introducing Christianity to the Irish was by adapting existing pagan traditions. For example, if people in a Druid settlement worshiped at a large standing stone, that is where Patrick and his team of missionaries placed a church. The new Christians would then carve the great stone into a cross.

One popular legend is that Patrick superimposed the Christian cross on the popular Celtic ring symbol, which stood for the sun or the world, to demonstrate Jesus' redemption of the world. He thus created the Celtic cross that churches continue to use. 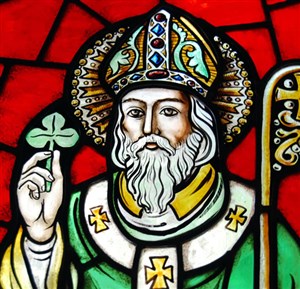 Another legend says that Patrick used the three-pronged leaf of the shamrock, a native Irish plant, to help teach the "three-in-one" doctrine of the Trinity. Of course, even ardent St. Patrick's fans acknowledge that this is a not the strongest analogy, since each shamrock prong does not have the fullness of the whole in the way that each of the three persons of the Trinity does. But it is an excellent example of employing something familiar to help explain a very foreign concept to those you are trying to reach.

As John Wesley would some 1,300 years later, Patrick combined evangelical zeal with social teaching. Patrick was the first well-known man in Europe to stand publicly against slavery. But it's his evangelism for which Patrick is most often remembered. Even the tale about the snakes may be a reference to how Patrick's ministry supplanted the serpentine symbols favored by Druids.

Patrick's ministry is a reminder that Christ's commission to make disciples of all nations is a form of loving our neighbor. Indeed, it seems that much of St. Patrick’s fourth century life and ministry offers lessons and truths for the 21st century church as we reach out in Christian love to the modern day “pagans” in our communities who are looking for truth and life in all the wrong places.


The preceding was adapted from an UMS article by Heather Hahn and Carol Galligan’s 2011 Shelter Island Reporter piece titled About Saint Patrick and other things Irish.
News