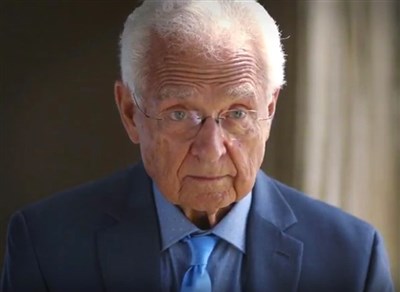 The Texas Methodist Foundation (TMF) awarded the TMF Medallion of Merit to W. Hiram Smith of the Central Texas Conference. The Medallion of Merit is the organization’s highest honor and is bestowed on individuals who have made a significant contribution towards advancing the mission of TMF and/or The United Methodist Church (UMC).

Upon learning of the award, Bishop Lowry was most pleased, but certainly not surprised. “Hiram Smith is one of God’s true champions,” he exclaimed. “He’s provided exceptional leadership in the Central Texas Conference and at his local church, DeLeon United Methodist, for years. Furthermore, he is one of the ‘E. F. Huttons’ of the Central Texas Conference. When he speaks, all the rest of us pause to listen to his advice. I thank God for the ministry he has shared with us.”

Hiram, a retired merchant and fruit farmer in DeLeon, Texas, graduated from Texas A&M University with a bachelor’s degree in economics in 1949 and a master’s degree in retailing from the University of Texas at Austin. He was owner and manager of the W.H. Smith Department Store, a 79-year-old business founded by his father, and of the W.H. Smith Fruit Farm, which was Texas’ largest fruit farm at one time. His professional affiliations have included chair of the board of F & M Bank in DeLeon, director of the DeLeon Chamber of Commerce and president of Developing DeLeon Today, Inc.

Hiram applied the same generous commitment of time and service to every facet of the United Methodist Church that he did to his community. As a devoted member of First UMC of DeLeon, he has served faithfully as stewardship chair, Sunday school teacher and finance committee and Administrative Council member. Respected as a leader in the Central Texas Annual Conference, as well as the general Church, he served as delegate to General Conference four times and to Jurisdictional Conference five times. He also served on the Mission Committee; Hispanic Ministry Committee; World Methodist Council; Mission Council; General Commission on Archives and History; as chair of the Rules and Structure Committee in the South Central Jurisdiction; chair of the Board of Pensions; and as vice president of the Central Texas Methodist Foundation.

“Hiram Smith is one of the greatest, and most humble Christians I have ever known,” said a beaming Dr. Lisa Neslony, West District Superintendent. “As his former pastor and now his district superintendent, I have seen his extravagant generosity and courageous leadership time and time again. I can’t even count the number of times he has worked behind the scenes to help someone whom others have given up on. I am so grateful that the TMF has given him this award. And I am even more grateful that I have had the opportunity to experience Hiram’s wisdom and grace.”

Hiram joined the TMF Board of Directors in 1988. As chair of the Grants Committee, his compassionate leadership and steadfast passion for helping others strengthened this important ministry so programs serving the most vulnerable among us could be more effective.

“I cannot think of anyone more worthy of receiving a TMF Medallion of Merit,” observed Candy Gross, TMF senior vice president of operations. “I had the pleasure of working with Hiram for many years as he served on the TMF Grants Committee, both as a member and as chair. No one gave their time more willingly. His leadership included a sensitivity to other points of view and an openness to building consensus among the group. Every member felt his friendship, support and an unwavering commitment to making a difference in the lives of others.”

TMF is not only the grateful recipient of Hiram Smith’s gifts and service but also that of his late wife Dale, his partner in life and ministry for 56 years, who is included in this honor. They are parents to three grown children and two grandsons.

TMF announced six other recipients of the TMF Medallion of Merit. The entire 2016 Medallion of Merit class include:
“We value these thoughtful leaders and their willingness to steward the potential of TMF and the wider United Methodist community,” said Tom Locke, President of TMF.

The following is the video shown at the 2016 TMF Awards Gala featuring comments from all seven of the Medallion of Merit recipients.
News