After 50 Years "The Dream" Is Closer to a Reality 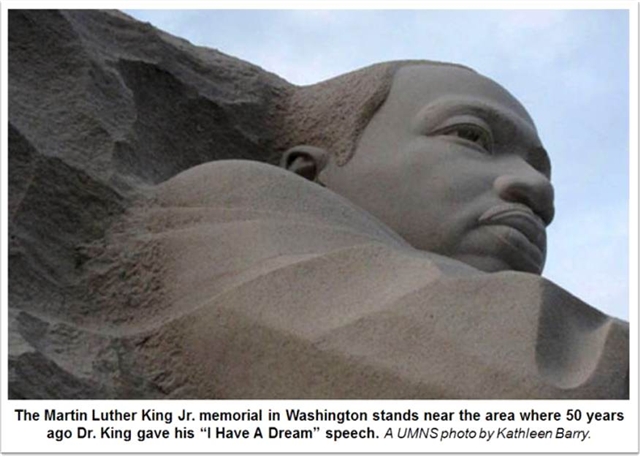 by Bishop Woodie W. White*
Dear Martin:
I write this year as we will observe the 50th anniversary of your “I Have a Dream” speech given at the historic March on Washington, Aug. 28, 1963.
It is hard to believe it was 50 years ago. I remember being on one of the many buses that left Detroit for the all-night ride to our nation’s capital. Sharing a seat was a fellow Methodist minister and Boston University schoolmate, who sadly died only a few days ago. He was committed to the cause of racial justice, like so many of the thousands of whites, from every walk of life, who were a part of the March.
We arrived as dawn was breaking. The streets were deserted and quiet but for the line of buses like ours filled with people coming from every part of the nation. Our bus and several others were directed to a local church, where we were served breakfast. The air was filled with expectation and excitement.
As the day moved on, the National Mall began to fill with thousands of people. I recall the crowd being one of the most multiracial and interfaith gatherings I have ever witnessed. A multiplicity of organizations was represented, with their members carrying signs of their group and particular concern.
Many clergy were easily identified, as Protestants and Roman Catholics alike wore clerical collars. But there were those of other faith groups as well. Among the crowd could be heard many accents and languages. It was a modern-day Pentecost!
The scene became a festive occasion with complete strangers quickly developing easy friendships. It seemed clear to us that this was no ordinary public demonstration; in fact, it was soon recorded as the largest such gathering ever assembled in Washington. Yet at first, none of us had any idea how historic an event it would turn out to be. And, of course, no one anticipated hearing a speech that would be considered one of the most important delivered in the 20th century!
Martin, I remember that it was midafternoon when you stepped to the podium to address us. We had already heard mini-sermons and speeches of every description. We had been entertained, inspired, encouraged and challenged. But when you began to speak, something happened. You took that mass of humanity to another level. It was Church!
And yet, it was even more. Somehow your words concretized the vision of a movement for racial justice and equality and made more real the ideal of a nation and the hope of a people. You painted a picture of your dream for America — and the more than 200,000 of us there realized that it was our dream as well!
Martin, on that day, you began to melt a nation’s heart. You made clearer a moral imperative that was not just your own but, as you said, was “deeply rooted in the American dream.” It was a dream of hope. It was a call to action. It was a recognition that racial segregation and discrimination as a way of life was antithetical to American democracy.
What a day. What a speech. What a dream. Fifty years ago! And this year we will remember that historic moment.
Martin, this past year has been on the one hand a time of accomplishment, as we watch the nation moving closer to a full realization of “The Dream.” On the other hand, we have also heard ugly, mean-spirited, racist rhetoric that harkens back to days that many had believed were long since gone. Racial prejudice dies hard.
Martin, you were fond of saying, “No lie can live forever.” But what I have observed is that a lie can live a long, long, long time! The black/white narrative in North American history and life is more than 400 years old, older than the nation itself. Black people have been variously defined as subhuman, property, three-fifths of a person, and more recently, as “other.” That is, not “real Americans.” This narrative is born of the assumption that black people and other people of color are innately inferior, that their very being is not equal to that of a white person. It is the old American narrative that has been proved to be what it has always been: a lie
However, a new American narrative is emerging. Millions of Americans of all races, ethnicities and religions are writing this new narrative. Martin, your “dream” is becoming, and in many ways has become, a reality. There are those who live this reality every day; indeed, some are young enough that they have never known anything else.
But not everywhere, and not everyone. Sadly, there are those who refuse to accept the new American narrative. They are stuck in the old one, heart and mind! Some make attempts to take us back — though they can never return us to a place that is no more. So, there is still much work to do. We must find a way to love them into the new American narrative.
Your dream continues to be a fitting vision of an American future. This year we will be reminded, as we remember your words thundered out across a sea of humanity 50 years ago. A dream not only “deeply rooted in the American dream,” but in the will of God at creation.
Happy birthday, Martin.
Woodie
P.S. I almost forgot. President Barack Obama was elected to a second term! Time Magazine named him Person of the Year, noting, “In 2012, he found and forged a new majority, turned weakness into opportunity and sought, amid great adversity, to create a more perfect union.” Coincidentally, President Obama’s inauguration will be on Monday, Jan. 21 — the same day as this year’s observance of the federal holiday marking your birthday. And, finally, in 2013, we celebrate the 150th anniversary of the Emancipation Proclamation, signed by President Abraham Lincoln, ending slavery in the United States of America, Jan. 1, 1863!
*Retired Bishop White is bishop-in-residence at Emory University’s Candler School of Theology in Atlanta.
News