A Call to Prayer for Connecticut 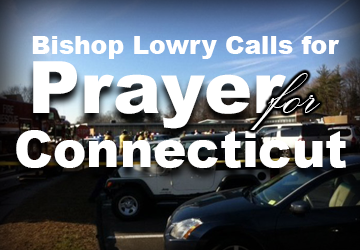 In one of the deadliest school shootings in U.S. history, a gunman opened fire Friday in a Connecticut elementary school, killing nearly 30 people -- most of them children.
President Obama wiped away tears as he spoke about the shooting from the White House’s briefing room. “Our hearts are broken today. I know there’s not a parent in America who doesn’t feel the same overwhelming grief that I do.” President Obama ordered flags to half-staff in tribute to the victims.
This entire incident is a true tragedy. As Christians, we are called to faithfulness in prayer, especially when we are witness to tragedies involving violence. Bishop Mike Lowry asks the Central Texas Conference to be in prayer for the families and the entire Newton, Connecticut community who are grieving such a tremendous loss.
It is appropriate to remember the Apostle Paul’s words in Philippians 4:5-7, which reads, “Let your gentleness show in your treatment of all people. The Lord is near. Don’t be anxious about anything; rather, bring up all of your requests to God in your prayers and petitions, along with giving thanks. Then the peace of God that exceeds all understanding will keep your hearts and minds safe in Christ Jesus.”
Susan Candiotti and Michael Pearson, CNN
Sari Horwitz and David A. Fahrenthold, Washington Post
Julian Hobdy, Central Texas Conference of the United Methodist Church
News