A Prelude to Powerful Possibilities 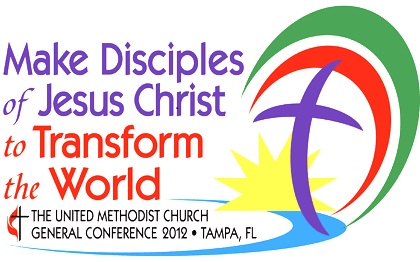 by Vance Morton*
For the better part of three days last week (a mere fraction of the time to be spent in April and May) the clergy and lay leaders of the Central Texas Conference General & Jurisdictional Conference Delegation (Dr. Mike McKee and Tom Harkrider) along with an increasingly humbled director of Communications (yours truly) immersed themselves in a Pre-General Conference News Briefing in Tampa, Fla. Now before you get envious of the location, rest assured that the beautiful surroundings were mostly enjoyed only via the view from the windows passed by during walks to the next appointment/meeting/panel discussion. The purpose of this gathering was to give the delegations and the communications people who will be bringing news from General Conference 2012 to the Annual Conferences a general overview of the major topics on the agenda to be covered, discussed and voted upon during the ten days (April 24 – May 4) of General Conference 2012.
During the three-day briefing put together by the good souls at United Methodist Communications (UMCom), several hundred  delegates, communicators and others from across the connection were briefed on topics such as the proposals for clergy effectiveness and the Episcopacy against the lens of leading, shepherding and growing vital congregations; the planned Act of Repentance; how the delegations and communications staffs can best share the stories of General Conference; the budget for the next quadrennial; proposed pension changes; the worldwide nature of the church; and three sessions on the proposed restructuring of the denomination as outlined in the Call to Action report.
You can find a plethora of information about those issues and subjects (with more being added all the time) on the General Conference website (umc.org/GC2012), and there will be plenty of more to come from the UMCom, including an official wrap up of the briefing event, in days as weeks ahead. And, of course, look to ctcumc.org for articles and commentaries from members of our CTC delegation as we march closer to General Conference.
By the end of the three days together, the enormity of the ask that we as a conference and connection place on our delegates pierced the mind and soul, setting both on fire with the challenges and the possibilities ahead for the global tribe of Christians called United Methodist. The amount of work and energy that has already been poured into the issues at hand was staggering. And each plan, procedure, proposal, etc. seems to genuinely have our mission to make disciples of Jesus Christ for the transformation of the world at its core. Oh sure, there were glaring differences of opinion as to how to best set out to meet the opportunities of the church as well as some very tough questions still to be considered and debated. Still, there was a focused sense of collaboration and oneness of purpose that permeated the discussions/debates of this pre-briefing. Let us pray that this is the same spirit that descends upon the delegations of General Conference in a few short months.
Please join your brothers and sisters around the world in supporting and thanking the wonderful lay and clergy representatives of the Central Texas Conference as they have the awesome assignment of helping to shape the direction of our denominational connection at a very delicate and important moment in time. If you believe the research, United Methodists have the very real opportunity to take our mission from “lofty goal” or “mere words” status and turn it into a reality that will effect generations – in the U.S. and globally. These 12 coming days in April/May could very well represent more than a crossroads in time. This could be more of a launching pad because the decisions made could rocket us down a course that could prove next-to-impossible to alter in any significant way by the next General Conference in 2016. So please pray for all our United Methodist delegations - and their families as this is a significant sacrifice of time and energy – as they prepare to engage in Holy Conferencing and set the future of the United Methodist Church. From what was gleaned during our pre-briefing, they have the real potential to spark a flame that could set the world ablaze with the power of the Holy Spirit.
Look for much more from and about our delegation in the coming weeks and months.

*Vance is the director of communications for the Central Texas Conference. vance@ctcumc.org