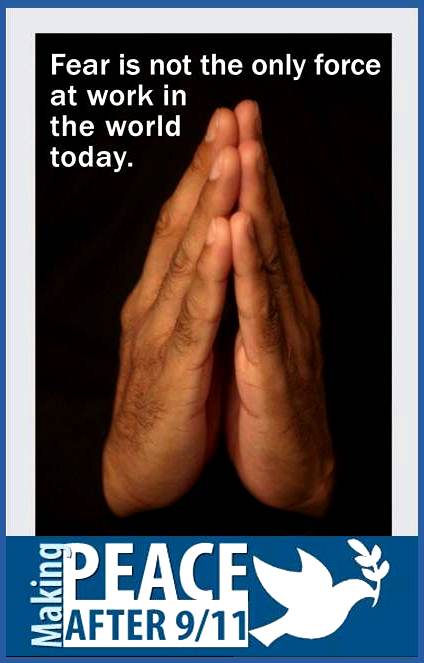 Sunday marked the 10th anniversary of the Sept. 11 hijacked plane attacks on the United States, in which nearly 3,000 people were killed. As we watched the ceremonies and remembrances throughout the day, surely our emotions have run the same gamut that Bishop Lowry describes in his recent blog post, “Anger and hope vie for control; fear and forgiveness wrestle with each other; peace and vengeance stalk the inner corridors of my soul. In a host of different ways we will remember the events and victims of the 9/11 tragedy. Once again I hope that we will lay our fears and hopes before the Lord.  The world needs Christians to show a yet more excellent way (I Corinthians 21:31).” As the observances from ground zero in New York City progressed it was that same message of hope for the future to which Bishop Lowry refers that rang true over and over and over.

The following is a sampling of the quotes commemorating the occasion at ground zero during in New York City:

“Ten years have passed since a perfect blue sky morning turned into the blackest of nights. Since then we’ve lived in sunshine and in shadow, and although we can never unsee what happened here, we can also see that children who lost their parents have grown into young adults, grandchildren have been born and good works and public service have taken root to honor those we loved and lost.” — New York Mayor Michael Bloomberg, speaking at the memorial service in New York.

“I haven’t stopped missing my dad. He was awesome ... I wish my dad had been there to teach me how to drive, ask a girl out on a date and see me graduate from high school and a hundred other things I can’t even begin to name ... I hope that I can make my father proud of the young men that my brother and I have become.” — Peter Negron, whose father, Pete, died in the World Trade Center, speaking at the memorial service in New York.

“Moira sacrificed all that she had and all the richness of life that still lay in front of her in order to save just one more person. Moira was killed when the south tower collapsed ... Today we choose to remember and share the joy Moira brought to all of us, and we vow that she will always live in our hearts.” — Retired New York Police officer James Smith, whose wife, New York Police officer Moira Smith, was killed on Sept. 11, 2001, speaking in New York.

“So many names, there is barely room on the walls of the heart.” — Former Poet Laureate Billy Collins, “The Names,” read by former New York Governor George Pataki at the service.

“May your soul finally rest in peace. Your son Nathan and I, as the years go by, grow strong. Goodbye, my dear friend, my teacher and my hero.” — Candy Glazer, whose husband Edmund Glazer was a passenger on American Airlines Flight 11, speaking at the memorial service in New York.

“For our family, Steve, the sound of your absence is deafening but I think you would agree that both our children have lived the lives we had hoped for. I am missing you now more than ever as I watch our son with our grandson Nicholas who was born just a little more than two weeks ago. With birth, there is hope.” — Jane Pollicino, whose husband Steve Pollicino died in the World Trade Center, speaking at the memorial service in New York.

“My son firefighter Leon Smith Jr., who was the sunshine of my life. He gave his life so that others could live. I love you, I miss you and we’ll meet again soon.” — Irene Smith, whose son was a member of the Fire Department of New York Ladder Co. 118, speaking at the memorial service in New York.

“Roy, you left the girls and I surrounded by love. Our families and friends have been amazing. We love you and we miss you so much.” Susan Wallace, whose husband Roy Wallace died in the World Trade Center, speaking at the memorial service in New York.

“Generations do not cease to be born, and we are responsible to them because we are the only witnesses they have. The sea rises, the light falls, lovers cling to each other and children cling to us. The moment we cease to hold each other, the moment we break faith with one another, the sea engulfs us and the light goes out.” — James Baldwin, read by Mayor Michael Bloomberg at the memorial service in New York.

“We never had a funeral because there was no body, so there was absolutely no closure. When we came out here 10 years ago, there was a hole in the earth and that’s how we felt. Now, 10 years later, there is grass and water, and it feels kind of like a new beginning.” — Dakota Hale of Denver, whose stepfather Alfred Marchand was a flight attendant on United Flight 175, speaking outside the memorial service in New York.

“God bless every soul that we lost. God bless the families who have to endure that loss, and God guide us to our reunion in heaven, and God bless the United States of America.” — former New York City Mayor Rudolph Giuliani, speaking at the memorial service in New York.