Prayers Requested for the People of Norway 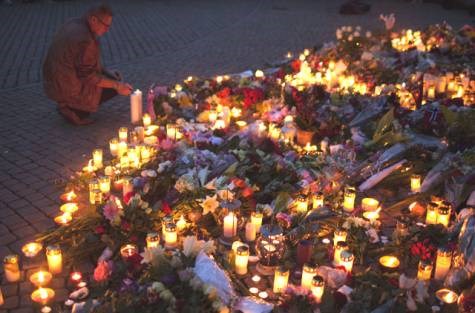 Bishop Lowry is asking that the people and churches of the Central Texas conference continue to be diligent in lifting up prayers for the people of Norway. As the reports from Norway continue to pour in regarding the July 22 bombings and shootings in Norway, it is clear that it will take much time and support for the people of that normally peaceful country try to come to grips with what is now the deadliest attack in that country since WWII. Yet, even in the midst of such horror, tales of heroism and sacrifice are beginning to bubble to the surface. For instance, the story of Marcel

Gleffe, a German tourist who heard the gunshots and raced his boat to the camp at the island of Utoeya saving as many as 30 children, serves to remind that even in the darkest of times, there is still plenty of light in the world and that God is with the people of that shattered nation.

The following is a letter from Bishop Christian Alsted, bishop of the Nordic and Baltic Area of the United Methodist Church, sent to the Council of Bishops and forwarded on by Bishop Lowry who is still traveling in Wesley’s England.
Life in Norway that we usually experience safe and secure was brutally shaken by a violent bomb explosion in the government district in Oslo on Friday 22. July, and further by an incomprehensible massacre at a national youth camp run by the Labour party on island Utoya. At this time the police have reported more than 90 victims, of which 84 are from the youth camp, and a number of people are injured. The police has arrested a 32 year old extreme right wing Norwegian who impersonating a police officer shot and killed youth at the camp and also is charged to be behind the bombing in Oslo.
In the past 24 hours we have seen pictures and heard stories of events, that we would not have thought could take place in a peaceful country like Norway. Young people on island Utoya have been exposed to experiences so horrifying, that it will impact them for life. This incident affects the whole nation of 4,5 million, and families across the country grieve their loved ones. In this national tragedy the Norwegian people needs the support, care and prayers of the churches.
Prime Minister Jens Stoltenberg has encouraged the Norwegian people to respond with openness in protection of our democratic society, and the cabinet fully supports this attitude. We know that our churches and pastors will actively participate in the care and support of affected families and friends. Many people will have a need to get together with others to share their thoughts and emotions in coming to terms with this terrible experience, therefore we encourage congregations to make our churches available for conversation, silence and prayer. We have also encouraged our churches to organize memorial services, preferably ecumenically, to give people the opportunity to express their grief and despair and to find comfort and strength in Christ.
The first memorial service will be at the Central Church UMC in Oslo on Sunday 24. July where bishop emer. Oystein Olsen will preach. At the worship services I all Methodist Churches
in the Episcopal area we encourage to prayer for the families who have lost loved ones. We also encourage to prayer for wisdom and strength for the Norwegian government, and to pray that Norway as a nation will not be ruled by fear but that we will be able to continue to live in trust and openness with each other.
Christian Alsted
Bishop of the Nordic & Baltic area
The United Methodist Church
News