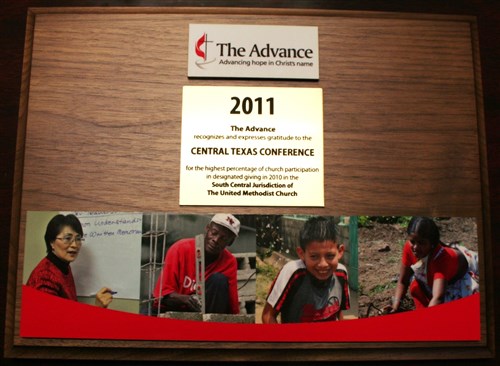 For more than 60 years the people of the United Methodist Church have donated generously to an official giving program known as The Advance. These donations (more than $1.2 billion so far)  have all been made via second-mile giving – in other words, contributions that are given after a congregation has met its "first-mile" responsibility to support the United Methodist Church's missions and ministries through World Service and other apportioned funds. While each Annual Conference of the United Methodist Church contributes to mission through The Advance, no conference within the South Central Jurisdiction did more to support this vital ministry than the people of the Central Texas Conference.

While we could go on and on about the extravagantly generous nature of the people of the Central Texas Conference perhaps it might be even more impactful to read it straight from the source of the award. The following is an excerpt from the letter Shawn Bakker, director, The Advance, sent to Bishop Lowry along with the award (bold and underline added).

In appreciation of your extravagant generosity, the Central Texas Conference has been officially recognized as having the highest percentage of church participation in support of The Advance. As a conference, we gave 2,313 gifts to the world through The Advance totaling $974,182. Eighty-eight percent of the churches in the CTC, more than 290 churches, gave gifts through The Advance representing a 38 percent increase in participation over last year. Talk about a total team effort!
Through gifts from individuals, families, groups, churches and districts, the people called United Methodists in the Central Texas Conference have been able to connect with those who are suffering and deprived and those who are hurting and discouraged. Gifts from the Central Texas Conference have helped support projects in over 100 countries and over 300 mission personnel.
Your contributions have helped feed the hungry, heal the sick, give shelter to the dispossessed and share the love and hope of Jesus Christ here at home and around the world. Your support of second mile giving helps change the lives of thousands of people. We are so proud to say that all of your gifts go 100 percent to the ministry that you choose.
The Advance is proud to give this award to a conference with a passion for mission. Without the generosity of your gifts none of this would be possible. We celebrate your gifts and partnership in mission together. For all that you do in Christ’s name, we say “Thank You!”
Congratulations Central Texas Conference! What do ya think…wanna shoot for 100 percent participation and a cool million in support next year?
News