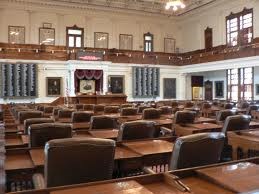 Crime victims may be among those who take the deepest cuts as legislators try to eliminate an estimated $27 billion shortfall.

Although the budget battle is just beginning, the consequences could be dire for state victim services as legislators scrutinize the $3 billion Texas Department of Criminal Justice budget. The House appropriations bill does away with all funding and staffing for the $2 million Victim Services Division. The Senate bill calls for cutting its budget almost in half.

“I guess until you’re a victim and need the services, it’s a ridiculous expense or a luxury,” said Ric Nesbit, whose 16-year-old daughter was murdered in 1995. “But there are many aspects of the services that are very worthwhile.”

Lawmakers are scrubbing every dollar as they face the difficult job of setting priorities. State leaders have pledged to cut spending rather than raise taxes.

Victim Services, with a staff of about three dozen, is a small part of the corrections system, which oversees more than 150,000 inmates. But for crime victims such as Nesbit and his wife, Judy, Victim Services is a critical lifeline during a horrific time.

The division, which began in 1993 at a victim’s request, has two purposes: to notify victims of changes in the status of offenders and to provide programs such as mediation between victims or their relatives and offenders.

Staffers do everything from keeping files on victim impact statements, which can later be used in parole hearings, to shepherding victims’ families through the grueling process of witnessing an execution.

Eliminating or gutting the division “would be a tremendous blow,” said the Rev. Sandra Lydick, executive director of the Crime Victims Council, a ministry of First United Methodist Church in Fort Worth. Her organization works closely with Victim Services to reach out to victims confidentially. “I think it would be devastating to crime victims in our state,” she said.

The Nesbits, who participate in grief recovery and victim impact programs, particularly like the telephone hotline that enables victims to check on the offender’s status, such as where he is in the prison system and when he becomes eligible for parole. “We have used that over the years,” Ric Nesbit said.

Their daughter was killed by two teenagers. Both received life sentences for capital murder and must serve 40 years before being eligible for parole.

Claudia Alexander, executive director of Victims Outreach in Dallas, a nonprofit group that aids crime victims, said she knows that when it comes to budgeting, “everything is up for grabs” but that Victim Services provides “necessary services for victims of violent crime.

“Just the other day, I helped a woman who had been in a domestic violence situation. … There had been more than one perpetrator,” Alexander said. “She knew that one was getting out, but she didn’t know where the other one was, what to expect. Did she have any rights? How could she find out? Did she have any option of protection because threats had been made?”

“So that’s one of the places I referred her,” she said.

Jerry Madden, R-Plano, who has served on the House Corrections Committee, said that there’s “definitely a need” for Victim Services and that despite the zero funding level suggested in the House appropriations bill, he doesn’t think it will be eliminated.

“I think part of the discussion was they were folding it someplace else,” he said.

Any effort to lessen the division’s visibility and reach doesn’t sit well with Judy Nesbit.

“It just seems it would make it more difficult for anybody that is a victim of a violent crime to find any information at all,” she said.

Supporters take heart in the knowledge that “zeroing out” the division wouldn’t be easy.

“ is one of the states … that have amended their state constitution to allow for a victims’ rights amendment,” Ric Nesbit said.

Among other things, the amendment, adopted in 1989, guarantees “the right to information about the conviction, sentence, imprisonment and release of the accused.”

Janice Lord, a Texas Department of Criminal Justice board member and a veteran victims’ rights advocate, said that it is too early to speculate on the budget but that she opposes eliminating or gutting the division.

“The Victim Services Division is indeed a crucial part of TDCJ services,” Lord said, pointing out that it was one of the first in the country and is often a model for offices in other states.

The division’s mission statement includes “assisting victims of crime,” she pointed out. “So it’s a pretty big deal for TDCJ.”

McCown said: “It would be difficult for the Texas Department of Criminal Justice to meet those [legislative] mandates if there was no Victim Services Division. … My hope is that once there’s more in-depth consideration, there’ll be an understanding that those are services that are mandated by law, those are services that attempt to balance the scales of justice so that victims have some rights.”