It had been announced in January that Rev. Mike Ramsdell would be heading west to serve as the DS of that part of the conference. However, due to some unexpected changes on the Central Texas Cabinet, Mike will now serve as the North District Superintendent. You can read more on those actions here.

“I’m delighted that Dr. Neslony will be joining the Cabinet as the West District Superintendent,” Bishop Lowry said. “Lisa brings a deep spiritual maturity that is calming to all around. She is fantastic in a team setting, lays out and sticks to strategies, is highly committed to learning and, above all, has a great commitment to Christ. The Cabinet and the West District will be most blessed by her service and leadership.”

Though she has served as senior pastor of Smithfield UMC for the past seven years, the West District isn’t new to Lisa. She has an impressive track record of success at Morton Chapel and De Leon UMC, where she developed several exciting and ground-breaking ministries. She has a deep affinity for the churches and culture of the West District, which was one of the many reasons in Bishop Lowry’s decision to appoint Lisa to the West District – a move that came from “out of the blue” for Dr. Neslony. 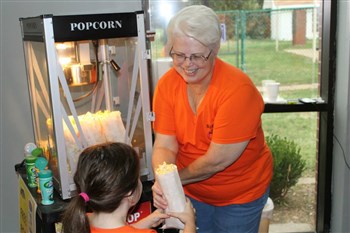 “I was extremely surprised and honored when Bishop Lowry called me and asked if I would consider serving the West District,” Lisa recalled. “I was also torn about leaving Smithfield before the conclusion of the HCI projects taking place there. After several days of intense prayer, I felt that moving into the DS role was where I needed to be. I am convinced that God will provide Smithfield with every grace to move forward in faithfulness with a new spiritual leader. And I am counting on God to give me all the spiritual gifts I need to lead in this new way.”

“My prayer for the West District and the Conference as a whole is the same as it has been for every church I have served: I pray that moment by moment we might become closer to God through our relationship with Jesus Christ. When that relationship drives ministry, amazing things can happen.”

Dr. Neslony’s commitment to collaboration and being a part of a team are evident to all right off the bat. When asked about her plans and expectations for the West District, Lisa commented, “Personally, I don’t think it is right for me to make plans for the West District before I’ve consulted with the clergy and laity who live there. Of course, I’m already dreaming of district-wide ministry possibilities. I want to pick up where Carol [Woods] has left off and hear the hopes and dreams of as many people as I can before I begin to interject too many ideas.”

Rev. Dr. Lisa L. Neslony (AKA Pastor Lisa) received her bachelor’s degree in journalism and education from Baylor University in 1981, and worked for 13 years as a reporter and editor at the Waco Tribune-Herald and the Fort Worth Star Telegram.  Lisa earned a master’s of divinity degree from Brite Divinity School in 1996 and was ordained an Elder in the Central Texas Conference in 1999.  She has served in several appointments in the CTC, with the last seven years at Smithfield UMC. 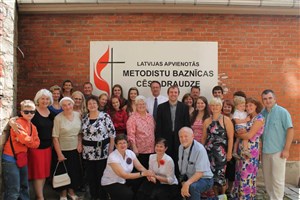 “I love the people of Smithfield more than words can convey,” Lisa remarked. “For the past seven years, we have laughed, cried, fought, celebrated, prayed, hoped and dreamed together. Among other things, we have supported a sister UM congregation in Latvia; started new backpack, farmer’s market and feed the hungry ministries; and learned that multiple styles of worship can co-exist under the same roof.  I will dearly miss being with the members of Smithfield on a daily basis, but I have no doubt they will continue to make disciples of Jesus Christ by developing life-transforming relationships with God, each other and the world.”

Please look for more on Lisa and her ministry as we get closer to AC16.
News