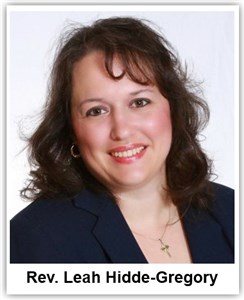 ”It is a great blessing to be able to add Leah to the Cabinet, and more so, to the people and churches of the Central District,” Bishop Lowry stated. “She not only brings a stellar track record of growing the local churches she has served, her great affection for the small church is infectious. She also possesses a phenomenal commitment to local missions – especially ministry to the poor – and has developed laity for positions of leadership at every turn.”

Rev. Hidde-Gregory is a self-described six-generation pastor having had the foundation of her faith forged in her childhood spent in a parsonage. After spending the early part of her ministry in churches in the Oklahoma and North Texas Conferences, Leah was able to enter the promised land of the Central Texas Conference in 2008 and has been serving and growing local churches ever since. Currently, she is the senior pastor of First UMC Hillsboro. Since her appointment to First Hillsboro in 2013, attendance has increased by more than 50 percent and the church has welcomed close to 100 new members and celebrated more than 40 professions of faith. 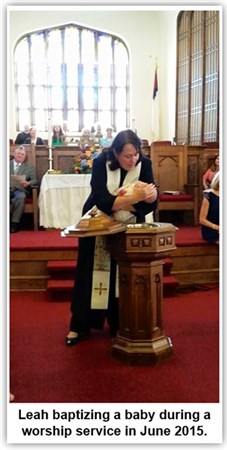 "I love serving in the local church and my heart is very much in energizing and equipping churches to be the hands and feet of Christ to a hurting world,” Leah observed when asked what about her time serving in Central Texas. “It has been a complete blessing to serve First United Methodist Church in Hillsboro. The people there are amazing, grace-filled servants of God, who take seriously the need to take the gospel into the community to reach those in desperate need of the light of Christ. I very much look forward to all they will be doing for Hillsboro and the kingdom of Jesus Christ in the coming years.”

Rev. Hidde-Gregory has served in myriad leadership roles outside of the local church during her ministry in the Central Texas Conference. She has been a mentor on both dCom and Board of Ministry levels, facilitated HCI and SCI groups, led numerous clergy and lay leadership groups, served on the District Committee on Ordained Ministry, Central District Executive Committee and chaired the Superintendency Committee.

Still, even with her success at the local level and all the experienced gained, Leah says this appointment was a blessed surprise. "I am humbly stunned to be appointed to the Cabinet as the Central District Superintendent. It is an honor to follow Don Scott after eight years of working with him and the ministry he has had in the Central District and all across the conference.”

"Having known Leah as a partner in ministry and friend, I am confident that she will continue her fruitful ministry and leadership in her new role as Superintendent in the Central District," said Rev. Don Scott. "Because of her leadership in the District, she is very familiar with the mission field, the churches, the clergy and laity who lead and serve in the Central District. Leah has a passion for Christ, sharing the Gospel and serving those in need. Her courage, wisdom and faith will serve her, the district and conference well as she continues to lead outward to the 'fields ripe unto harvest.' I look forward to working with her in the transition and into the future."

According to Bishop Lowry, finding the right person to follow Don as DS of the Central District was no easy task. “I am extremely grateful for the work Don Scott has done on the Cabinet and in his districts (Waxahachie 2008-11 / Central 2011-16)”, Bishop Lowry said. “As I prayed about who should replace him, it became clear that someone with a desire for small and rural churches was what was needed. I believe Rev. Hidde-Gregory is ideally suited to lead the mission of the Central District.”

“I am so very grateful and excited for this opportunity,” Leah commented. “My prayer is that God will show me the ways to encourage and empower the churches, clergy and lay leadership of our district."

Rev. Hidde-Gregory received her Master of Divinity from SMU in May of 2011 and is currently working on her Doctorate in Ministry at Wesley Theological Seminary, through the Lewis Center for Church Leadership in Washington, D.C. Leah has three children, Maddie, Caroline and Will and is married to her “partner in ministry” Stan Gregory. Please look for more on Leah and her appointment as the Central District Superintendent in the weeks leading up to Annual Conference 2016.