Rev. Carol Woods and Rev. Don Scott have declared their intention to retire from active ministry in The United Methodist Church to Bishop Lowry, the Central Texas Conference Cabinet and to the members of the West and Central Districts. Both will officially retire at the 2016 Central Texas Annual Conference scheduled for June 5-8, in Waco. 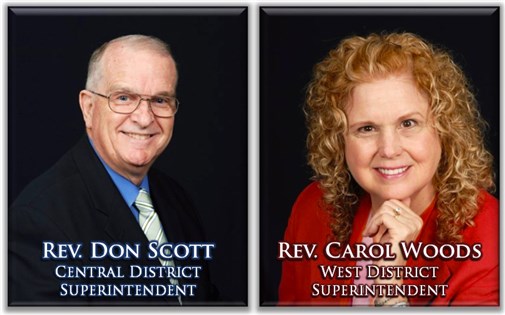 arol’s 30-year ministry journey has seen her serve local churches in two conferences and spend a total of 12 years as a superintendent – the last seven of which have been in the Brownwood and West Districts of the CTC.  Don has served as the Waxahachie and Central District Superintendent since June 2008. His retirement will bring an “official” end to a ministry that spans the last five decades in the Central Texas Conference.

Please watch ctcumc.org for more on the careers and impact Don and Carol have had on the Central Texas Conference as we get closer to our Annual Conference meeting in Waco this June.