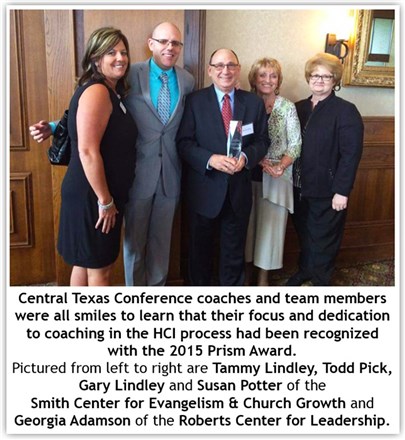 The North Texas Chapter of the International Coach Federation (ICF) honored the CTC’s Lamar E. Smith Center for Evangelism and Church Growth (CECG) and the Choctaw Nation of Oklahoma as co-recipients of its annual Prism Award. The CECG team was nominated and selected for the award based on Healthy Church Initiative (HCI) coaching that has helped to develop leaders, address strategic institutional goals and yield measureable positive results for many of the local churches in our conference.

The ICF panel judged the CTC’s Healthy Church Initiative on its effectiveness, impact and results. Some of the results that evidently tilted the scales in the favor of the CTC’s CECG team including increases in measureable engagement from 2013 to 2014 in the areas of average attendance (+3%); participation and outreach (+12%); and small groups (+25%).

Since the launch of HCI in the Central Texas Conference (CTC) in 2012, laity from 33 congregations and more than 100 pastors have experienced and benefited from coaching. Pastors of churches that have completed the HCI process in full reported that the greatest impact of HCI has been: Pastors who have participated in the coaching initiative are now being recruited for coach training so they may serve as an internal coach to other local entity leaders and can learn to be “coach-like” in leading their own staff.  Where there was once skepticism about coaching, leaders at all levels have opened up and are requesting and embracing coaching. The success of this coaching initiative has been a catalyst for additional coaching initiatives. 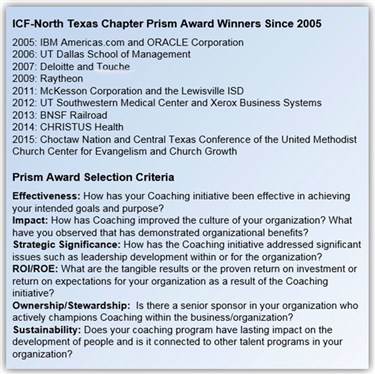 “Coaching is one of the reasons HCI has brought hope and excitement to pastors and laity in our churches,” commented Rev. Todd Pick, director of Operations, Smith Center of Evangelism and Church Growth. “Rather than be victims of change, coaching and leadership development throughout the HCI process equips pastors and laity to become leaders of change.”

Coaching is a widely-used term with a variety of meanings. With so many definitions, the ICF defines coaching as “partnering with clients in a thought-provoking and creative process that inspires them to maximize their personal and professional potential.”

The Smith Center for Evangelism and Church Growth has more than a dozen ICF certified coaches who work one-on-one with pastors as they develop leadership skills in the first phase of HCI. Several of these “pastor coaches” have additional credentials, specializing in coaching for clergy. The CECG also has additional clergy and laity who have been trained as “church coaches” who walk alongside and support churches in the consultation and implementation phases.

“I’m very proud of our CECG team and all our Central Texas Conference coaches,” exclaimed Rev. Gary Lindley, executive director, Smith Center for Evangelism and Church Growth. “Coaches in HCI are inspiring our churches to live into their God-given potential by empowering clergy and congregations to develop a mindset open to God’s possibility, clarify goals and then take steps to fulfill specific ministry action plans.”
News