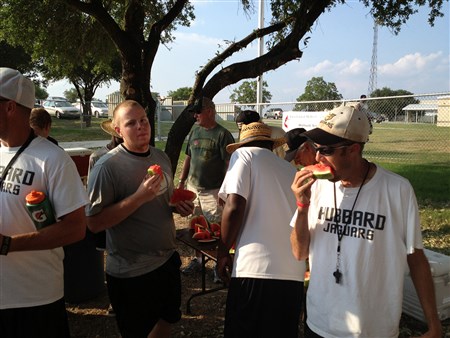 What do free watermelon and God's transformational power have in common? More than you'd think.

A few summers ago, the First United Methodist Church of Hubbard served ice cold watermelon to the Hubbard Jaguar football team after the first day of full pad workouts. (If you think the Texas summer is hot, try working out in a suit of football armor in August!) Our goal was to let the team and coaches know that we support them and wish them luck for the upcoming season. The cold melon was eagerly welcomed, so we did the same thing the following season – with a twist – we opened it up to several churches to come and serve the free melon.

Soon after, God opened another door by giving me an opportunity to teach a Bible as Literature class in the high school. Twelve seniors had signed up for the class and before the first day of school, I got a call from the head football coach, who asked, "Our normal Wednesday practices don't last very long, would you and maybe some of the other pastors be interested in giving a devotional to the team after practice on Wednesdays?"  Of course, I said "yes."  We were to start the following week. At least that's what we thought. God had other plans it seems.

The weather forecast looked bad for Friday night's home scrimmage with the Bartlett Bulldogs, so it was moved up to Wednesday night. Both the Hubbard coach and the Bartlett coach got calls about the scrimmage interfering with "church night,” so the Hubbard head coach asked if we could help by starting our devotional time the day of the scrimmage instead of next week. Again, we said, “yes!”

Both teams came together in the lobby of the gym (players and coaches) to listen to a devotional about the difference between the world's idea of being successful and God's idea of being significant. After we prayed together, the teams took the field of friendly competition. Each following Wednesday, the pastor of the Hubbard First Baptist Church and I took turns encouraging, challenging and offering Jesus to a handful of student athletes during a devotional time that came be known as "Time Out." 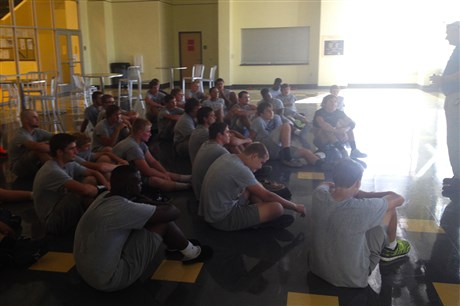 We figured that after the playoffs this devotional opportunity would end.  However, yet again, God had other plans. We were asked if we would like to continue after the season. Of course, yet again, we said "yes."

As we continued to offer Jesus to the football team each Wednesday after school, we began to be joined by the female high school athletes as well as some middle school athletes. All in all, more than 75 Hubbard ISD students (churched and un-churched) regularly hear a message of God's love, hope and promise through Jesus Christ every Wednesday afternoon. Because of the Wednesday afternoon devotionals and being on campus one period every day, we have had the opportunity to pray with teachers, coaches and students that we would not have had without God opening these doors.

While this has been an experience beyond expectations on so many levels, the highlight for me happened one Wednesday afternoon when a senior at the school came running up to us as we were preparing to leave. The student asked if we had time to talk. We then proceeded to stand in the high school parking lot and listen as this student shared with us something that had previously gone unuttered – not to friends or parents or anyone else. This senior high school student, who did not go to any church, got to unburdened his heart not to one pastor, but two – and it all began with a slice of cold watermelon on a hot August afternoon.