Getting Out of God's Way

17 years ago, a food pantry ministry began in Hubbard, Texas and was operated out of the Hubbard First Church of God. As the years rolled by, the Hubbard Ministerial Alliance (HMA) became increasingly more involved in the pantry and began to implement its plans on how to “improve” food pantry operations. These “improvements” eventually lead to relocating the pantry from the church and into an empty building in town and changing the Hubbard Food Pantry into a once-a-month giveaway where food purchased for $400 a load from a Waco food bank ministry was made spread out in the non-air conditioned showroom of a defunct Ford dealership. Instead of selecting food from shelves, people would file through picking up inferior product off of pallets on the floor. 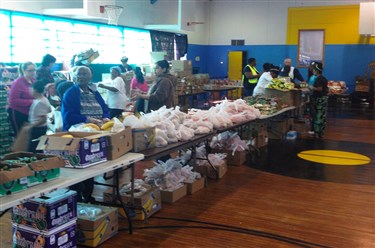 Even with the best of intentions, the HMA’s improvement plan backfired. At most, we would serve around 40 families per month, and, at its peak, there would only be 5-7 volunteers to help unload the truck and lay out the food. People were being denied dignity, the Ministerial Alliance was running out of money and the food selection was limited at best and more often, flat out undesirable.

That’s when God opened the door to a new path (some say He pushed the primarily white ministerial alliance out of the way) and began to truly transform the food pantry ministry.

In the fall of 2013, a member of the Macedonia Baptist Church (an African-American congregation) told the HMA about an opportunity in which the Tarrant Area Food Bank would deliver 7 to 8 pallets of free food to Hubbard one Saturday a month that we could give away out of Hubbard's Wheatley Recreation Center (the old black high school gym on the south side of town). Two months later, we had the first food drop.

The food was free, fresh and plentiful – for the first time in years, we were able to 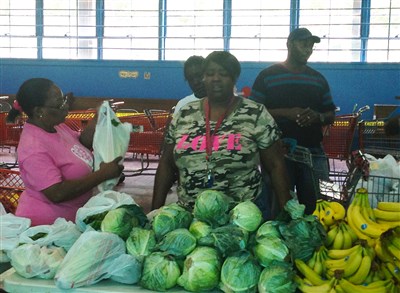 Currently we serve more than 200 families every month from area communities, including Hubbard, Dawson, Mount Calm, Malone, Penelope, Bynum and Coolidge. And, the number of families we serve is matched only by the number of volunteers we have each month. There is no church's name on this ministry, no race moniker on this ministry, and no single person's name on this ministry - it is simply the Hubbard Food Pantry Express Giveaway that continues to build God's kingdom every third Saturday of the month in Hubbard, Texas.

*Bob is the pastor of Hubbard UMC & Mt. Calm UMC.