Bishop Lowry voices his ardent support of AC18 Resolution, which calls policy of separating children from parents “inhumane” and denounces the establishment of “tent cities” in Texas.

Central Texas Conference congregations and members tare urged o contact their U.S. representatives in Congress and the White House and call for an immediate reversal of these actions. 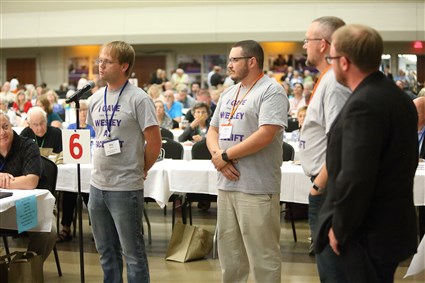 On June 13, responding to the U.S. Department of Homeland Security’s enforcement of the current U.S. “zero tolerance” immigration policy, the members of the 2018 Central Texas Annual Conference overwhelmingly approved a resolution to oppose the policy, the “inhumane treatment of God’s most vulnerable persons – children - and denounce the establishment of tent cities for migrant children in Texas.

Under the current U.S. “zero tolerance” policy, anyone suspected of crossing the border illegally faces criminal prosecution. Children traveling with adults facing prosecution are separated from their families and placed into U.S. custody. U.S. protocol prohibits detaining children with their parents because the children are not charged with a crime. In the six weeks from April 19 – May 31, as many as 2,000 children – more than 100 being less than 4 years old – have been placed in shelters or in foster care.

Beyond opposing the zero tolerance policy, the resolution – titled Central Texas Annual Conference Response to Proposed Tent Cities for Migrant Children – also affirms the value of all persons and supports the humane treatment of all vulnerable persons. You can read the full resolution here.

“By passing the resolution by an overwhelming majority, the laity and clergy of the Central Texas Conference have fervently joined their voices with Christians across the United States indicating our deep desire that these actions cease,” stated Bishop Mike Lowry, episcopal leader of the Central Texas Conference of The United Methodist Church, in his most recent blog post. “I am asking that all faithful Christians prayerfully consider contacting the elected officials that represent you and request that a change be made to this policy that is immoral and in conflict with Christian values.”

In a personal letter sent to President Trump, Vice-President Pence, U.S. Speaker of the House Paul Ryan, Senators John Cornyn and Ted Cruz and the 10 U.S. Representatives serving districts in the Central Texas Conference, Bishop Lowry strongly affirmed the adoption of the resolution and added his strong personal agreement. “The Christian faith has long held an understanding that the relationship between parent and child is a part of God’s creative order; as such it is both sacred and blessed by the Lord,” writes Bishop Lowry. “While recognizing legitimate concerns for border security, efforts separating children from their families are not a moral ways to achieve border security.”

The United Methodist Council of Bishops in partnership with faith leaders from diverse Christian denominations as well as other religious traditions have also released a statement condemning the practice of separating children from their parents and calling for the immediate cessation of this practice. While The President of the Council of Bishops, Bishop Ken Carter, signed on behalf of the COB, Bishop Lowry strongly supports and appreciates the statement and urges the reading of it.
News