What does the future hold for the United Methodist Church? That was just one of the many vital topics up for discussion during a May 15 meeting of three General Conference delegations from Texas.

The full delegations from the Central Texas, North Texas and Rio Texas Conferences gathered at the historic St. Johns UMC in Georgetown, Texas to begin the process of forming and building relationships between the delegations. The meeting also provided a ripe forum in which the delegates could discuss the future of the United Methodist Church and any potential legislation that might be introduced in committee at General Conference. 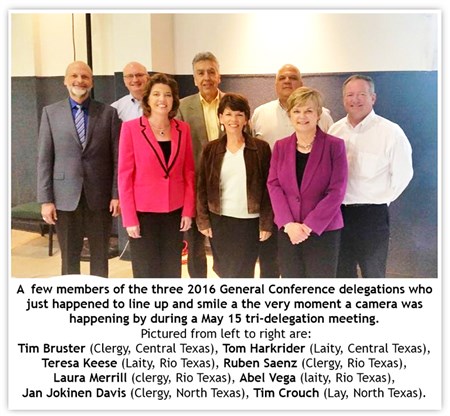 One of the many duties of a 2016 General Conference delegate is to serve as a member on one of twelve legislative committees. Each committee will then meet and address a certain portion of the Book of Discipline. During the meeting in Georgetown, several delegates presented new legislative proposals on multiple topics, including Human Sexuality, the Global Book of Discipline, Restructuring of the Church (Plan UMC Revised) and the Mission 21 Task Force (South Central Jurisdiction realignment).
The delegates also considered fifteen legislative proposals coming from the Annual Conference Lay Leader’s group – proposals that have already received support from laity; received an update on changes to the daily schedule and legislative process of GC2016 by a member of the UMC Commission on General Conference; considered the election of Judicial Council representation; and weighed the qualities needed for an effective member of the Judicial Council.