Council of Bishops Reaffirms Its Call for Unity

During the Tuesday, May 17 morning session of General Conference 2016, the Council of Bishops President Bishop Bruce Ough rose for a moment of personal privilege to address rumors regarding as to what might be happening within the Council of 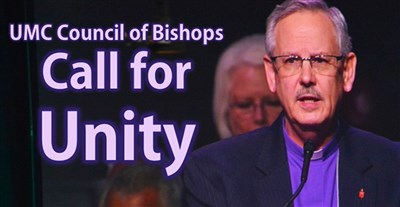 Bishops regarding a potential split in The United Methodist Church. These rumors, which began to brew on Twitter during the waning hours of Monday, May 16 and turned into a full Twitter storm in the early morning hours of Tuesday, mainly centered around the idea that the Council of Bishops (COB) would announce a call for a special General Conference in 2018 on the issue of a pending church split.
In his statement (which is included in full below), Bishop Ough (pronounced Oh) quelled those rumors and reiterated the COBs commitment to remain united as a connection. In his statement and in the subsequent press conference, Bishop Ough admitted that the COB is not of one mind regarding the issues of human sexuality and other high emotion issues facing the church. However, he did confirm that the council IS of united regarding their commitment to maintaining the unity of The United Methodist Church, staying open to new and innovative ways to be in unity and remaining in dialogue with one another and others about how God may be leading the UMC to explore new beginnings, new expressions, new structures for our United Methodist mission and witness.
He also reminded that no matter what happens prior to the gavel falling on Friday, or in subsequent Council of Bishops or Judicial Council decisions, come Sunday, thousands of clergy will be holding services in churches all over the world, and following those services, hundreds of thousands of United Methodist laity will be going out into the world and serving as the hands and feet of Jesus Christ – working to make disciples and transform the world for the kingdom of Christ.

An edited version of Bishop Ough’s post-session press conference is below. The content has been edited for time only – removing the questions from the reporter pool for example. To view the full press conference, please watch the official UMC General Conference News feed.

Statement to the General Conference by Bishop Bruce Ough

May 17, 2016
I begin with a brief autobiographical story. On Christmas Eve, 1973, my family and I returned home from Christmas Eve worship to find my 20-year-old brother, who had remained home with a cold, having a heart attack. He was stabilized at our local hospital. A few days later he was flown by air ambulance to the Mayo Clinic in Rochester, Minnesota. There the doctors performed open heart surgery. When they opened his heart, they discovered it was severely diseased, probably from an undiagnosed case of rheumatic fever. There was nothing the doctors could do, so they sewed up his chest. Two days later he had another heart attack. He had difficulty breathing and was placed on a ventilator. Next, his kidneys failed and he was placed on a dialysis machine. My brother, Greg, was dying. The day of decision arrived. My parents, overcome with grief and misplaced guilt were immobilized. So at the age of 23, it fell to me to make the decision to turn off the machines keeping my brother alive.
My brother died of a diseased heart, but my heart was broken. I know what it is to have a broken heart. What it feels like to have a broken heart. Many of you know what it is to have a broken heart.
I stand before you today, on behalf of my episcopal colleagues, to tell you I have a broken heart – that collectively we have a broken heart. Our hearts break over the pain, distrust, anger, anxiety and disunity we observe and experience in our beloved United Methodist Church. This brokenness is centered on matters of human sexuality, the interpretation of scripture, the inclusion of our LGBTQ brothers and sisters, all fueled by the despair over the decline of the church in North America. Our broken hearts, and a profound clarity that we, as your bishops, are charged with the spiritual and temporal oversight of the church, have driven us to our knees in prayer and into intense, holy conversations with ourselves and others as we have been considering how to maintain unity and bring healing to the church.
Prior to arrival in Portland, and certainly while we have been gathered at General Conference, we have been in dialogue with leading voices from various groups, our conference delegations and General Conference officials. We have sought to fully understand differing perspectives and positions. We have been prayerfully listening and actively watching for the movement of the Holy Spirit. We have risked exploring what many would consider radical new ways to organize The United Methodist Church according to deeply held and differing values and convictions. Ideas brought to the attention of the Council by both more conservative and more progressive voices. We are not fearful of the level of vulnerability and humility required of anyone willing to engage new ideas.
It is challenging to have this level of Christian conferencing in the anxious and time-constrained environment of the General Conference. Anxious, distrustful organizations have difficulty affording one another space. I recognize that! It appears from social media that our conversations have unintentionally contributed to the anxiety at this General Conference. I offer my sincere apology for such.
As shepherds of the entire flock, the Council of Bishops is committed to maintaining the unity of The United Methodist Church. Not a superficial unity to serve to veneer over our pain and disunity, but an authentic unity born of the Holy Spirit; a unity not afraid of the truth and respectful of all. Even as we call for unity in the entire church, we confess our Council is not united. This work begins at home and we have acknowledged such. We are not advancing or advocating any plan for separation or reorganizing the denomination. We clearly understand and respect the constitutional prerogative of this body to propose and act on legislation. As your presiders, we are committed to enabling this body, by the grace of God, to perform your legislative function.
At the same time, we remain open to new and innovative ways to be in unity. We will remain in dialogue with one another and others about how God may be leading us to explore new beginnings, new expressions, new structures for our United Methodist mission and witness. So much of who we are and how we are in mission together is working. Bishop Palmer testified to this reality in his powerful episcopal address. And, so much of who we are and how we are in ministry together needs to adapt to new realities. Many voices believe we are out of time. This may be the moment to let God’s unlimited imagination lead us to imagine a new way of being church.
Come, Holy Spirit, break through, set us free, revive and renew our United Methodist movement and connection. Mend our broken hearts. Call us back to be your flock together!
Dear friends, we belong to God and we belong to one another. I urge you, as we have been encouraged this week, to join your bishops to put on the garment of grace, to walk humbly with one another, to seek justice for all. We share a common heritage and a common rule of life – to do no harm, to do good and to stay in love with God. Let us redouble our efforts to maintain the unity of the Spirit in the bond of peace. For there is one body, one Spirit, one Lord, one faith, one baptism, one God, who is above all and through all and in all.
Thank you for your courtesy.
General and Jurisdictional Conference News & Info