The Hope of Glory ©

12/28/2021 - Conference News Discipleship Future
My dear friends, saying Goodbye is always difficult. Shakespeare’s phrase captures the feeling for “Parting IS such sweet sorrow.”  I thank God, and I thank you for the privilege of serving as the bishop of the Central Texas Conference for the last 13 and a half years. As a “goodbye” blog (actually it’s a God-be-with-you blog for that is what goodbye means), I offer my words of response at my retirement celebration held on Oct. 24 at Arborlawn UMC in Fort Worth. 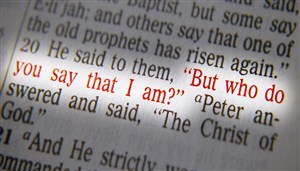 The words are uttered amidst the panoply of worship sites in honor of other gods. With some of you, I have physically stood at that site (in what is called Caesarea Philippi). “He [Jesus] said to them, ‘But who do you say that I am?’ Simon Peter answered, ‘You are the Christ, the Son of the living God.’” (Matthew 16:15-16)

I stand before you today to bid my formal goodbye to the Central Texas Conference of the Fort Worth Episcopal Area. I do so reluctantly, timidly, almost fearfully. Oh, please don’t misunderstand, it is not because I don’t want to retire from the active episcopacy. I do so wish to retire!

If you think about the history of bishops in the church stemming from 1 Timothy 3:1, there came to be arch-bishops and then bishop electors called cardinals and crowning it all the position of Pope, Bishop of Rome. Those who share my love of history will recall that the word Pope comes from title Pappas or Pappa (affectionally Greek and Latin for “Father”). There were originally 4 Pappas and soon five: The Pappas (Pope or Patriarch) of Jerusalem, Antioch, Alexandria, and Rome with Constantinople added when the emperor moved there. I am delighted with my coming elevation to Poppa (American for Pappas?) and even more delighted with a congregation made up of Grace, Simon, Sam and Adam!

“You Can’t Retire from Christian Ministry”

My conversion came after a late-high school and early college dalliance with agnosticism. I can never thank Professor Dick Davis, late of Earlham College, enough for his sharing Christ and the Christian faith. I entered the faith and seminary during the effusive uproar of the late 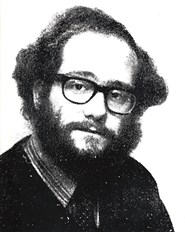 1960s and early 70s. With a beard, a red-haired shag intended to be an Anglo afro, which instead left me looking more like Bozo the Clown, I took part in my share of the protest movements of that time.  Our only half-whimsical slogan was “let’s march on city hall and figure out why on the way down.” Mixed in all of this, saturated by passion and fueled by avant-garde convictions, the question of Christ, “who do you say that I am?” never left me. In the deepest sense of my life, answering that question posed by Jesus himself at Caesarea Philippi has been and will continue to be a lifetime project.

I was ordained a Deacon (back in that day you were ordained a probationary deacon on your way to being an elder) on June 23 in 1974. Prior to that. I had been co-pastor at Rich Square Friends Meeting (Quaker) and worked a Youth Director at First UMC Ardmore (Oklahoma). Forty-seven plus years and seven appointments later (two of which I asked the Bishop and Cabinet not to make), it is past time to step aside. In the first pastorate on my own at St. Paul in Kerrville, I ran into an old, retired clergy at a Ministerial Alliance Christmas party. He was grumbling and griping about being referred to as a “retired minister.”

“What’s this” he muttered, “you can’t retire from Christian ministry.” Even then, in my twenties, I knew enough to agree with him. I look forward with joy to service as Bishop-in-residence at United Theological Seminary. It is a great seminary that has already been a wonderful blessing in my life, and I look forward to seeing some of you there!

Jolynn – The Belle of the Ball 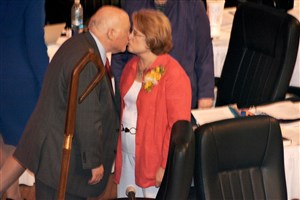 I, like most Methodist clergy, married up. In the book The Table Talk of Martin Luther, Luther somewhere worries that he loves his wife more than he loves God (and Luther being Luther he is concerned that is a sin). I am not holy enough (nor neurotic enough) to worry about sinning in loving my wife, but I do know the feeling Luther is reaching for. Jolynn is the love of my life and a constant blessing from God (even in the middle of arguments!). I still find it incredible that she puts up with my hyper-activity, irascible moods, passionate convictions, and only partially reformed workaholism. I married the belle-of-the-ball, and I know it. I overheard someone once saying, “she’s so nice. I wonder what she sees in him?”

Together, we have been gifted by God with two incredible children – Nathan and Sarah, two super kids-in-law – Abigail and Steven – and the aforementioned congregation of the amazing Grace (8), super Simon (6), Yosemite Sam (5 & 11/12ths) and the awesome Adam (4). My heart still thrills on recalling our daughter Sarah say to me just a couple of hours after Grace’s birth, “Daddy, Grace is here!”

The Joy and Blessing of the Central Texas Conference

On entering the pastorate, I had dreamed of someday being at a church big enough to have a part-time secretary (as an intern minister, the Sr. Pastor Jack Heacock had insisted that I learn how to do a bulletin on the old Gestetner Stencil machines). To my complete shock, I was asked, after a period of prayer and discernment, to offer myself as a candidate for the episcopacy by the Southwest Texas Conference delegation. In what I can only describe as act of God, I was elected to the episcopacy in 2008. In the run-up to that Jurisdictional Conference, Jolynn and I had prayed that if I was elected, we hoped to be sent to Central Texas. It has been one of God’s blessings in our lives that this hope came to pass. 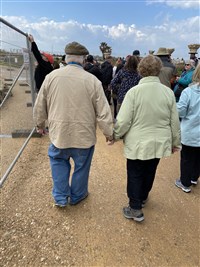 We came here in our 50s and are leaving in our 70s with only one original knee between us. As I have said in previous episcopal addresses, we are in high seas and the gale-force winds of our age are lashing at us. I will not insult you by pretending that the way forward is easy. It is not.  But with Mr. Wesley I will remind myself and you that “the best of all is that God is with us!”

For myself, and believe for Jolynn, we thank God for the high privilege, great blessing and superior honor of serving with you in ministry here in Central Texas. I know myself to have been richly blessed to serve as your bishop for these 13-plus years! Please accept my (our) massive thankfulness and gratitude for the privilege of sharing with you in ministry. In times both good and bad, the laity and clergy of the Central Texas Conference have been a joy and blessing to us! I thank you. I thank each and every one of you.

There are far, far too many people to explicitly name with my personal thanks and gratitude. I will do so in a more private way. The one exception I wish to make is give a shout out all those who have served with me on the Cabinet. I am so deeply in your debt and wish to publicly share my vast gratitude and towering appreciation! 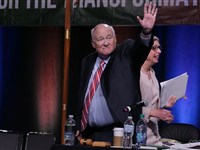 When I interviewed as a bishop, I said that at the end of the day, when someone shoveled dirt on my casket, I hoped that someone else standing nearby would say, “That was a submitted man. He gave his life to Christ.”

For now, allow me to yoke Robert Browning’s famous phrase with the Apostle Paul’s incomparable witness. “Grow old along with me! The best is yet to be, the last of life, for which the first was made.” (Robert Browning) “Christ in you (in me, in us!), the hope of glory.” (Colossians 1:27b)

I thank God! And, I thank you for the privilege of sharing in ministry together. God be with you.
Bishop's Blog