Standing on the Promises ©

12/15/2020 - Advent Christ Christmas Jesus trinity
The first United Methodist Church to which I was appointed as a pastor on my own was St. Paul’s UMC in Kerrville, Texas. Just out of seminary, and not even married a year, I was excited and full of ideas. Practical reality landed on my desk in week one with the need to write a worship service for the following Sunday, type up a bulletin 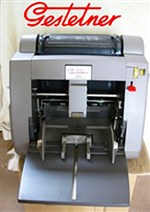 (this is pre-computers), and run the bulletin off on the old blue ink Gestetner mimeograph machine.

With care, I crafted my first bulletin. With prayer, and a bunch of do-overs, I managed to get it finished. Sunday came, Emily Ware, the charter-member volunteer choir director, stood to lead the congregation in the first hymn. With a puzzled expression she looked over at me. I smiled, blissfully confident in the theologically correct selection of a hymn that would reinforce the Scripture lesson. On the down beat, I began to sing an unintentional solo – badly, very badly!

During the following weeks and into the next months, I tried hymn after hymn seeking wider congregational participation with little success. The choir would sing, and I would join them, but the congregation was largely silent. Then, in mid-August, I picked “Standing on the Promises” as the opening hymn of praise. I fully expected the same results (i.e. little participation) as Emily stood and brought the congregation to attention. The downbeat came and the music roared forth! 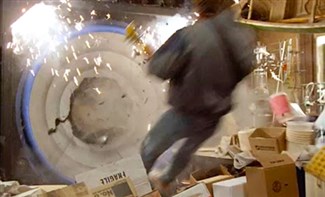 If you recall the scene from Back to the Future where teenager Marty McFly (Michael J. Fox) plugs into wacky Professor Dr. Emmett Brown’s (Christopher Lloyd) souped-up amplifier, plays the first cord on his guitar and is blasted into the back wall, that is what happened that morning at St. Paul’s. Emily said later (a bit breathlessly), “it was like somebody turned up the volume too loud!”

The congregation loved the song “Standing on the Promises! It spoke their “heart” language. I would learn later in my doctoral studies that the Christian music that speaks to us most as individuals, is the music of our conversion (that is, the music sung at the time and point in our lives where Christ becomes real to us). For St. Paul’s UMC in 1977, it was “Standing on the Promises.”

This upcoming Sunday’s Old Testament lectionary text comes from the seventh chapter of Second Samuel (2 Samuel 7:1-11, 16). King David is settled with his rule secure, the nation is at peace and the king (with the best of spiritual intentions) decides he should build a temple of worship worthy of “God’s chest” (that is, the dwelling place of God; the Ark of the Covenant). In a dream that night, the word of the Lord comes to the prophet Nathan. The building of a great temple of worship is not to be King David’s task. The work of the Lord through King David is establishing a nation. “Now I will make your name great—like the name of the greatest people on earth.” (2 Samuel 7:9b) This is the promise of God. The lineage of King David will reign. “Your dynasty and your kingdom will be secured forever before me. Your throne will be established forever.” (2 Samuel 7:16)

Let the preacher and the worshiping congregation pause here.

It is easy in the accumulation of Christmas festivities to forget that the coming birth of Jesus is the fulfillment of the Davidic promise made way back in 2 Samuel. The full seventh chapter of 2 Samuel fills up the connection which brings the Advent journey to Bethlehem.

“Moreover the Lord declares to you that the Lord will make you a house. When your days are fulfilled and you lie down with your ancestors, I will raise up your offspring after you, who shall come forth from your body, and I will establish his kingdom. He shall build a house for my name, and I will establish the throne of his kingdom forever. I will be a father to him, and he shall be a son to me.”  (2 Samuel 7:11b-14a) Recall how Luke shares the start of birth narrative of Jesus.  “Joseph also went from the town of Nazareth in Galilee to Judea, to the city of David called Bethlehem, because he was descended from the house and family of David. He went to be registered with Mary, to whom he was engaged and who was expecting a child.” (Luke 2:4-5)

The promise of God made in 2 Samuel 7 is fulfilled in the birth of the baby Jesus. The kingdom of God, God’s rule and reign, is begun through a promise. The words of the old hymn, rarely sung at Christmas, evoke a deep truth. 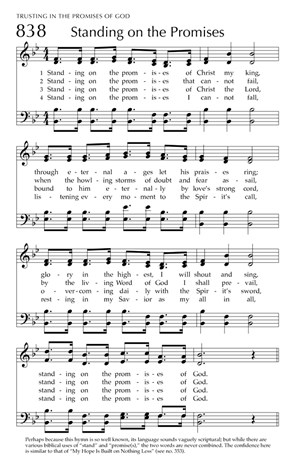 We are a people who stand on the promises of God. In the third Sunday of Advent, it is time to turn the volume up on the promise of God to send a son as Savior and Lord, rescuer and ruler. 2 Samuel 7 is meant to be paired with the gospel reading of the coming birth of Jesus (Luke 1:26-38.) Together, the two text’s flow into one story.

1. God is to be trusted.  We can stand on the promise made by the Lord.

2. Jesus is the Savior and King so longed for.  Once again Charles Wesley’s hymn writing brings back to the profound promised truth.
“Born thy people to deliver,
born a child and yet a King,
born to reign in us forever,
now thy gracious kingdom bring.
By thine own eternal spirit
rule in all our hearts alone;
by thine all sufficient merit,
raise us to thy glorious throne.”
(Come, Thou Long Expected Jesus, The United Methodist Hymnal, No. 196, v. 2)

3. Jesus comes to reign and rule in our lives ushering in the Kingdom of God. The challenge of discipleship is encountered in a Bethlehem stable with the reign and rule of the infant Lord and Savior, the true King promised so long ago. The question that brings us to Christmas Eve worship is simple yet all consuming - will we be numbered among the faithful who come to a Bethlehem stable? The baby born there does not want admirers. He claims followers. Kathy Mattea sings the question that lingers in the air upon the reading of the two lectionary texts in her song “There’s a New Kid in Town.” 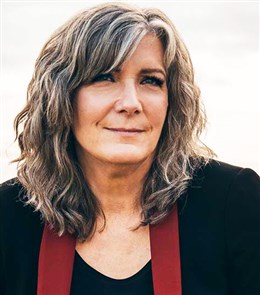 May Mary’s answer be ours. “Then Mary said, ‘Here am I, the servant of the Lord; let it be with me according to your word.’ Then the angel departed from her.” (Luke 1:38)
Bishop's Blog