Reflections on The Line Becomes a River ©

1/17/2020 - Call to Action Christ Christmas church Immigration Jesus refugees Resources social holiness
Moving into the heart of January, we tend to slide easily over the first part of the life of Jesus and settle back into our lives.  Amid the chaos of international events, the clamor of impeachment hearings and the ongoing drama of our everyday lives, there remains an important biblical story to be encountered.

Ancient church tradition holds that the magi (or wise men) arrived to present their gifts to the baby Jesus on January 6.  This is celebrated as Epiphany Day.  Epiphany m 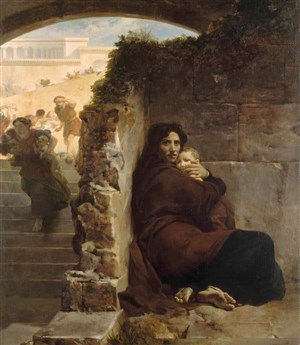 eans the “appearance” or “manifestation” of light, in the person of the baby Jesus, to the Gentiles. A closer examination of the biblical text in Matthew 2 suggests that the wise men possibly arrived up to two years after the actual birth. (see Matthew 2:16) The Epiphany is that Christ has come, God is revealed in human form to the Gentiles, that is to us.

Whatever date of arrival you put on it, what is clear is what happened next.  It is often referred to simply as the “massacre of the innocents.” Herod orders all the children in the area two years old and younger to killed. Evil stalks the ancient we call “Holy.” The Bible tells that the baby Jesus, with his parents, fled as refugees.

“When the magi had departed, an angel from the Lord appeared to Joseph in a dream and said, ‘Get up. Take the child and his mother and escape to Egypt. Stay there until I tell you, for Herod will soon search for the child in order to kill him.’ Joseph got up and, during the night, took the child and his mother to Egypt. He stayed there until Herod died. This fulfilled what the Lord had spoken through the prophet: I have called my son out of Egypt.” (Matthew 2:13-15)

I wrote on this reality a few years ago and actually got a letter from someone who angrily argued that Jesus was not a refugee fleeing for his life.  It surprised me that anyone could seriously make such a wrong-headed assertion in light of the biblical evidence.  New Testament scholar after New Testament Scholar, across the theological spectrum from conservative evangelical to progress neo-unitarian, have pointed to the clear refugee status of the infant Savior and Lord.

As we move into the year of our Lord 2020, I urge us to pause in prayer and reflection over this truth.  Today around the world, we find ourselves in a growing refugee crisis.  The cacophony of American debate over a wall is echoed in various other forms across the world.  Whatever our political position, whatever our nationality or ethnicity, those who flee seeking a better, safer life, are children of God.  We may well argue with each other about how best to respond but those who profess to follow Jesus Christ must do so understanding that He was once a refugee.  Our Savior and Lord came for all and died for all.

From 1980 to 1984, I served as a pastor in the Rio Grande Valley.  Routinely, when guests came to town to visit us, we took them across the border for dinner or shopping.  Traffic across the border both ways was a part of life.  Today it is dramatically different.

Recently the active bishops of the South Central Jurisdiction (SCJ) in our Texas Methodist Foundation Conclave (a clergy study group for serving bishops) read The Line Becomes a River: Dispatches from the Border.  It is written by Francisco Cantu who was an agent for the Border Patrol from 2008 to 2012, a former Fulbright fellow, and the recipient of a Pushcart Prize.
At one point, about two-thirds of the way through the book, after Cantu has left the Border Patrol to work on a Masters’ degree in writing, he encounters a friend who has lived in the United States for a number of years.  Cantu does not know if his friend is a legal immigrant or green card worker.  The friend goes back to Mexico to be with his dying mother. For reasons that are unclear, he has difficulty getting back into the United States after his mother dies.  Cantu writes, “He doesn’t know, getting back across isn’t what it used to be.” (Francisco Cantu, The Line Becomes a River, p. 177)

This is a profoundly true observation. I found Cantu’s book, The Line Becomes a River, to be challenging, fascinating and disturbing. The Wall Street Journal has written that it, “veers away from propaganda and stereotypes and into the wild deserts and mountains.”  The New York Times Book Review has commented that it “lays bare, in damning light, the casual brutality of the system.”

I commend to you a reading of The Line Becomes a River.  It won’t turn a Republican into a Democrat or a Democrat into a Republican. Instead, it will challenge to go much deeper into nuanced reflection and prayer on an incredibly complex and complicated moral issue.  We, who follow a Savior who began life fleeing the brutality of King Herod as refugee, are invited to bring our faith into a much deeper engagement about how we might best respond to others in similar situations.  H. L. Menken is reported to have asserted that “for every problem there is a solution that is simple neat and wrong.” The Line Becomes a River has helped me move beyond simple solutions to greater Christian moral reflection leading to action in response.  I commend this outstanding, disturbing, enlightening book to your learning.
Bishop's Blog