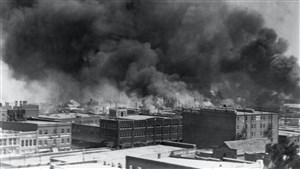 As Jolynn and I watched the evening news, a report came on about the Tulsa massacre.  By now you may know the story. At the end of May 1921 mobs of white residents attacked black residents and businesses of the Greenwood District in Tulsa, Oklahoma. It has been called “the single worst incident of racial violence in American history.” The attack, carried out on the ground and from the air via private aircraft, destroyed more than 35 square blocks of the district known as “Black Wall Street” – at that time the wealthiest black community in the United States. There is more to the story. It is accurately reported that more than 800 people were hospitalized, as many as 6,000 black residents were interned. An Oklahoma State Commission in 2001 confirmed at least 36 deaths and estimated that the actual total might be as high as 300.

As the TV news report finished, silence descended in our den. Then Jolynn (my wife of almost 44 years) commented with sadness and regret, “I never learned about that in Oklahoma history!”  Jolynn grew up in Seminole, Oklahoma – not that far from Tulsa. Studying Oklahoma history was a required course in her high school, and yet, a crucial part of the state’s history was left untaught, unshared and unlearned.

We often hear the quote “those who do not learn from history are doomed to repeat it.” It originates from the Spanish philosopher George Santayana. There is a profound truth lodged in Santayana’s statement. As painful as it might be, getting history right is critical if we are to move forward as people of faith, citizens of our country, and 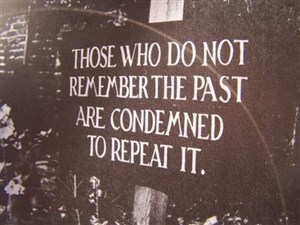 residents – by the grace of God – of this larger world which the Lord has created for us. Ignorance is not bliss; it is just ignorance, and such ignorance imperils us all.

Getting history right, honoring the past and learning from it, call us to pause remember and learn.  (It is significant that when the Lord Jesus instituted Holy Communion he did so with the admonition, “Do this in remembrance of me.” - Luke 22:19) Proverbs 2 reminds us to “Turn your ear toward wisdom, and stretch your mind toward understanding. Call out for insight, and cry aloud for understanding.” (Proverbs 2:2-3) The Apostle Paul reminds us near the close of his letter to the church in Rome, “Whatever was written in the past was written for our instruction so that we could have hope through endurance and through the encouragement of the scriptures.” (Romans 15:4)

Getting history right is not a partisan clamor for political correctness. It is part of the fabric of being a faithful disciple of Jesus Christ. 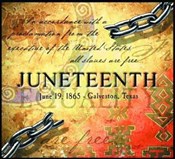 Today is Juneteenth. I confess that I did not learn about this great day in American history in my high school history classes either (and I grew up in Northern Illinois – the land of Lincoln). Dr. Clifton Howard graced me with knowledge when he shared that “one of the earliest Juneteenth celebrations took place in Mexia.” Clifton added that the celebrations there have taken place since the 19th century.

Just as we appropriately celebrate the Fourth of July, we should celebrate Juneteenth. A recent statement from the Council of Bishops of the United Methodist Church reminds us: 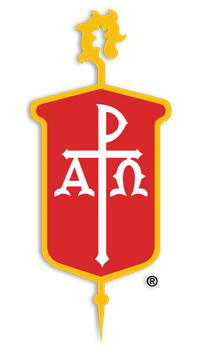 June 19th, is a day known to many as “Juneteenth.” Juneteenth is the oldest nationally celebrated commemoration of the ending of slavery in the United States. It was on June 19th in 1865, two and a half years after President Lincoln’s Emancipation Proclamation, that Major General Gordon Granger announced in Galveston, Texas that the war had ended and that those who had been enslaved were now free. General Granger’s words began most significantly with, “The people of Texas are informed that in accordance with a Proclamation from the Executive of the United States, all slaves are free. This involves an absolute equality of rights and rights of property between master’s slaves.

Those are great words but, as we know, it has been and remains a long struggle on the road to freedom. During the Civil Rights movement, Juneteenth was a focal point in the story of struggle for postwar civil rights. In the 1970s, it became the focal point for African-American freedom and arts. By the advent of the 21st century, Juneteenth began to be celebrated in most major cities with readings of the Emancipation Proclamation, singing of traditional songs, and readings from noted African-American writers.”

Together, the Bishops of the United Methodist Church are calling on us to learn from our history.  Our intent is to initiate deeper conversation. Getting history right will lead us to:

As a part of this conversation, the bishops off the Church offer a “Dismantling Racism” initiative. The “Dismantling Racism: Pressing on to Freedom” initiative is a multi-level effort throughout the church to initiate a sustained and coordinated effort to dismantle racism and promote collective action to work toward racial justice. The church-wide effort kicked off today to coincide with Juneteenth, with an announcement from members of the United Methodist Council of Bishops that was originally broadcast at 11:00 am CT on UMC End Racism website UMC.org/EndRacism as well as on the UMC Facebook page.