Forward Towards a New Spring: A Different Church for a Different World Part I ©

A Different World Struggling to Be Born

A heartwarming event took place at the close of the 11 a.m. traditional worship on Sunday, April 11, Michael and Sue Beaton joined Arborlawn United Methodist Church. Their story is a tale of the WIG – the Wildly Important Mission of “making disciples of Jesus Christ for the transformation of the world.” Their journey to such faith commitment shares a different narrative of different church in a different world struggling to be born. Pastor Chris Mesa writes: 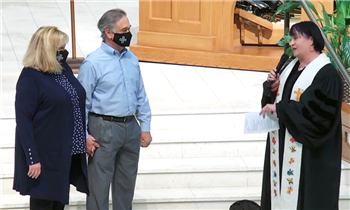 “When the pandemic forced most all area churches to suspend in-person worship services, like many people they felt disconnected from faith community. The Beatons then discovered our online services and began worshiping with us regularly. They have been worshipping online in our traditional service for over a year. Although they had never actually been physically on campus, they made relationships through our virtual campus and eventually decided to join the Arborlawn church. On the Sunday after Easter, they set foot on the Arborlawn campus for the very first time as they took the membership vows. Welcome home, Beatons!”

Last year’s annual meeting of the Central Texas Conference adopted a new strategy for embracing our long held biblically grounded goal given by the risen Christ of making disciples.  (Matthew 28:16-20) Entitled Forward to a New Spring, this critical strategy document challenges us to step into a very different future. I believe that we must be about building a different church for a different world.

With this blog, I am introducing a series of blogs (interspersed with other blog writings) under the banner of Forward Towards a New Spring: A Different Church for a Different World. A different world is struggling to be born, and with it, I believe a new church is emerging. We are living in a resurrection that is not easy but is wonderful. Allow me to explain.

A poem entitled “The Second Coming” written by the great poet William Butler Yeats at the close of the First World War (1919) has captured my imagination and reflective intellect. 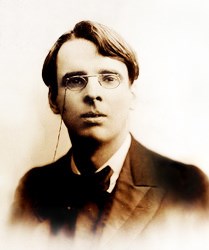 “Turning and turning in the widening gyre
The falcon cannot hear the falconer;
Things fall apart; the centre cannot hold;
Mere anarchy is loosed upon the world,
The blood-dimmed tide is loosed, and everywhere
The ceremony of innocence is drowned;
The best lack all conviction, while the worst
Are full of passionate intensity.
Surely some revelation is at hand;
Surely the Second Coming is at hand.
The Second Coming! Hardly are those words out
When a vast image out of Spiritus Mundi
Troubles my sight: somewhere in sands of the desert
A shape with lion body and the head of a man,
A gaze blank and pitiless as the sun,
Is moving its slow thighs, while all about it
Reel shadows of the indignant desert birds.
The darkness drops again; but now I know
That twenty centuries of stony sleep
Were vexed to nightmare by a rocking cradle,
And what rough beast, its hour come round at last,
Slouches towards Bethlehem to be born?”

The Falling Apart of Things

I am captivated by the phrase “Things fall apart; the center cannot hold.” I believe this is reflective not only of America and our deep partisan political divide but also of the United Methodist Church and our deep theological divide. Furthermore, it is a serious mistake to casually assume that the two parallel each other.

The “falling apart of things” is far more than a simplistic binary issue. It was more than 30 years ago that Dr. George Hunter (then Associate General Secretary for the Board of Discipleship) spoke of United Methodists in the United States as living in an age of religious anarchy. It was true then and is an even more accurate description of the religious climate in America today. Toss in our growing regional and political chaos and the word “anarchy” as a description of the moral/values climate we find ourselves in is not an overstatement. Yeats was describing us when he wrote “Mere anarchy is loosed upon the world, The blood-dimmed tide is loosed, and everywhere The ceremony of innocence is drowned.” 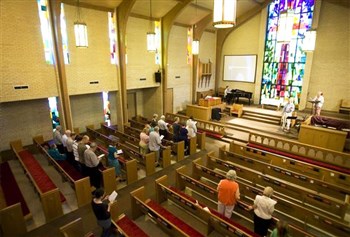 When I came to the Central Texas Conference and was doing my initial round of visits 12 and a half years ago, I would speak of a “post-Christian age” or “the end of Christendom” (meaning that we could no longer assume culturally dominant Christian viewpoints and values). To illustrate differently, it used to be common that when someone ran for political office, they publicly identified with a particular church and or denomination.  I can’t help but remember the guy in Corpus Christi whose wife was a very active member, but he never came to worship. When he decided to run for the City Council, he suddenly volunteered to serve as an usher every Sunday morning.

Clergy tended to respond to my comments about us being in a post-Christian age with polite boredom. The response was usually some version of “Bishop, we’ve known this for years!”  Aleksander Solzhenitsyn wrote of the “dawn of a post-Christian era” back in 1968 with In the First Circle. Many pastors were introduced to the topic by Loren Mead in The Once and Future Church in 1991 and Stanley Hauerwas and William Willimon’s Resident Aliens in 1989.) Then and now, my response was (and is) “Yes, but I don’t see that affecting the way you serve as a pastor and interact with your mission field today.” (A significant side bar: We clergy know the truth of the end of Christianity’s cultural hegemony, but that truth has yet to really impact our behavior as religious, spiritual and ethical leaders.)

About the same time, I found myself at a Texas Methodist Foundation (TMF) Board meeting where clergy talked about the end of Christendom. A smart, successful, and highly committed laymen interrupted the conversation. “What is this?” he exclaimed. “Why haven’t we been told about this?” As I circulated in the Central Texas Conference sharing about this cultural reality, countless numbers of lay people would seek to engage in on what was for them a new idea and topic. In the intervening decade plus, the reality of a post-Christian America has moved much more deeply into the consciousness of Christian lay leaders. Churches are just now beginning to wrestle with what it means to live in an America where Christianity is not the religious default option of the community. 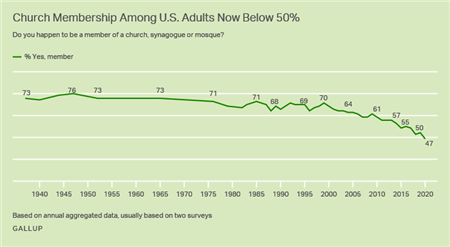 A recent Gallup survey – U.S. Church Membership Falls Below Majority for First Time  - reported that Church membership has fallen below 50 percent in the United States. In 1999, church membership was at 70 percent. Other surveys report similar results.

A 2015 Pew study - 5 key findings about the changing U.S. religious landscape  - shared that 23 percent of Americans were “religiously unaffiliated” with three percent of that number identifying as atheist and four percent as agnostic. Something like 16 percent fell into the nebulous “nothing in particular” category. The biggest divide is by age, with young much less involved in historic Christian religions and church denominations.

The news is not all grim. Something important is taking place. Among those who have stayed active in local church life, we are starting to see a higher level of commitment. According to a 2019 Pew study – In U.S., Decline of Christianity Continues at Rapid Pace  - 45 percent report worshipping at least monthly. It is important to point out that we – that is Christian in both America and the wider world - have been here before. Only 14 percent of Americans were church members in 1800. Rodney Stark and Roger Finke’s The Churching of America originally published back in 1992 shares the fascinating story.

It Is a Different and Exciting Religious World

My point in all this is straightforward and one that we know well but easily ignore. It is a different religious world we find ourselves in. I think this is exciting. I believe God is pruning the church in order to renew it.  Increasingly, to be Christian means something significant. Christianity is no more a mere cultural accoutrement. This is a good thing! I think it is evidence of the Holy Spirit at work among us and in our churches. It does mean that we must have a different church for a different world.

In developing the Forward to a New Spring strategy document, one of the cardinal principles we applied to Conference planning was the conviction that crisis is an accelerator of change. This is especially true as we struggle to emerge from a pandemic. Reflect again on the opening story of the Beatons. The first Sunday they visited in person was their Sunday of commitment. God is at work in ways that constantly surprise us.

Let me say it again. A different world is struggling to be born. With it, I believe a new church is emerging.

We are living in a resurrection which is not easy but is wonderful. As amazing (and befuddling) as it might seem, we live in an Easter world. Recently, in our Cabinet Class meeting time, I was reminded again of 2 Timothy 4:1-2.

“In the presence of God and of Christ Jesus, who is to judge the living and the dead, and in view of his appearing and his kingdom, I solemnly urge you: 2 proclaim the message; be persistent whether the time is favorable or unfavorable; convince, rebuke, and encourage, with the utmost patience in teaching.”

The next post in this series will be “The Search for a New Center.” Also, if you haven’t seen it, I commend to you a video recently put out by our Conference Communications team introducing our Assistant District Superintendents - another exciting change under the Forward to a New Spring initiative to better energize and equip local churches. Please click here to view that video, and/or go to the conference Facebook page and share it with your social media friends.