Anguish and Witness in Troubled Times ©

As I write this blog today, I am, along with so many of you, in anguish. The shooting of Jacob Blake by police in Kenosha, Wisconsin, followed by the gunning down of Joseph Rosenbaum and Anthony Huber pierces the heart. Stunned incredulity at multiple police officers chasing Jacob Blake with a drawn gun while Kyle Rittenhouse walks unchallenged down a public street with a loaded AK-47 illuminates the discrepancy in racial treatment. As someone who had the high privilege of pastoring a good number of wonderful, deeply committed police and law enforce officers during my thirty years as a local pastor, I know of their strong commitment to justice for all. I have deep respect and appreciation for their service. I am aware that many good and honorable police officers question the failure to confront Kyle Rittenhouse in a manner consistent with the treatment of Jacob Blake. Still, the contrast in treatment is striking and remains a glaring example of the different standards of law enforcement. Such disparity and unequal justice can only be ignored at our peril as a civil society.

As Christians let us be unmistakably clear - Black Lives Matter! They matter to God and they should matter to us. All lives matter, but for far too long in America we have consciously and unconsciously operated as if white lives matter more than others. In the name of Christ our Lord such sinfully blighted thinking must stop!

“There is neither Jew nor Greek; there is neither slave nor free; nor is there male and female, for you are all one in Christ Jesus.” (Galatians 3:28)

As multiple hurricanes lash our shores, I am mindful that the flood waters of our time involve issues of a pandemic, racial justice, economic tribulation and political chaos. All of us face together these rising waters and howling winds. As an ardent sports fan, I am impressed by the protests initiated by the Milwaukee Bucks of the NBA and now being adopted in various forms by professional teams in multiple sports. Their example leads me to pointed reflection on the Christian witness of faith in the rising social and cultural flood waters of our time.

As both the Republican and Democratic National Conventions fade into the background, I desire to remind myself – and all of us collectively – that we follow the lamb and not the elephant or the donkey.

“The next day John saw Jesus coming toward him and said, “Look! The Lamb of God who takes away the sin of the world!” (John 1:29)

However partisan our personal political preferences maybe, let the lion roar over the bellowing of the elephant and the baying of the donkey. "Then one of the elders said to me, 'Don’t weep. Look! The Lion of the tribe of Judah, the Root of David, has emerged victorious so that he can open the scroll and its seven seals.'” (Revelation 5:5) 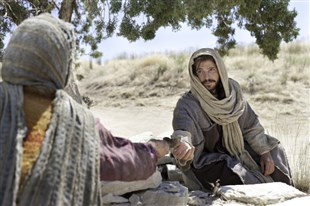 Jolynn and I recently listened to a compelling devotional on the story of the woman at the well in John 4. She was a despised member of the Samaritans – a group of people who were looked down upon ethnically by Jews – and she was socially rejected because of her multiple husbands, yet she was the one to which Jesus deliberately reached out in love, justice and mercy. (read John 4:4-30) The passage closes with her witness to Jesus as the Christ in troubled times.

“The woman put down her water jar and went into the city. She said to the people, “Come and see a man who has told me everything I’ve done! Could this man be the Christ?” They left the city and were on their way to see Jesus. (John 4:28-30)

The story does not end with Jesus moving on. Rather, it reaches its conclusion with her witness for Christ!

In the Eastern Orthodox tradition, she is regarded as a saint and named Photini (meaning “luminous one”). Her public witness to Christ eventually brings her to the attention of the Emperor Nero. (You remember Nero; the corrupt evil ruler who falsely blamed Christians for the burning of Rome.) On her own, she is said to have gone to Rome to give witness to the Lordship, the rule of Christ, and the Savior love for all. The story goes: 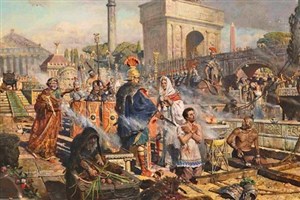 “Soldiers were ordered to bring her to the emperor, but Photini anticipated them. Before they could arrest her, Photini, with her son Joseph and her Christian friends, went to Nero. When the emperor saw them, he asked why they had come. Photini answered, "We have come to teach you to believe in Christ." The half-mad ruler of the Roman Empire did not frighten her. She wanted to convert him!”

Nero beat and tortured her, but she remained steadfast in the faith. Graciously and courageously she continued giving her witness. One version of the story reports that Photini converted the emperor’s own daughter. Eventually Nero had her thrown into a deep well and she died a martyr’s death.

The great Methodist theologian Albert Cook Outler in the historic Denman Lectures in 1971 before the United Methodist Congress on Evangelism entitled Evangelism in the Wesleyan Spirit called for the church to be a “church of martyrs and servants.” He reminded us that the word “martyr” means to “bear witness.” (see especially Chapter IV). In our time, we tend to want to separate the two – witness by which we mean evangelistic sharing and servants by which we mean missional service to those in need. Biblically speaking, such a separation is always a step away from negating the gospel. Our verbal witness to gospel, to Christ and to his kingdom “on earth as it is in heaven” is always to be specifically and concretely linked to serving those in need, especially the last, the least and the lost. The two are inseparable and, in the anguished struggle of our times, we must step forward witness that refuses to allow for a separation.

Making disciples involves us in a crusade against racism just as it involves us in proclaiming Christ is Lord. Disciples embrace all people in the name of Christ – following him in the service of love, justice and mercy as an inseparably linked element of our evangelistic witness. As they would say in the NBA, it is time to up our game.

As your bishop, I am asking up to speak up and speak out against racism. Secondly, I ask that we all take a specific step in personal growth and societal outreach in becoming more anti-racist.

Moderator’s Note: One way to take personal growth steps in becoming more anti-racist is to join the General Commission on Religion and Race (GCORR) this September in its 30 Days of Anti-Racism effort. Learn more at gcorr.org/30-days-of-anti-racism.

Another excellent way to grow in this area is to join Bishop Lowry and Dr. Clifton Howard each Wednesday in September (beginning Sept. 9) for a live lunchtime discussion via Zoom on the wonderful book Be the Bridge. Details and registration info is available at ctcumc.org/be-the-bridge.