On Thursday evening Nov. 4, I drove to Rockwall, Texas, and joined with a widely ecumenical small group to listen to a presentation by Ed Stetzer. For those of you who do not know of Ed, he is what I would term a moderate Southern Baptist. As his bio puts it….

Ed Stetzer “is the editor-in-chief of Outreach magazine, and a professor and dean at Wheaton College where he also serves as executive director of the Wheaton College Billy Graham Center. He has planted, revitalized, and pastored churches, trained pastors and church planters on six continents, and has written hundreds of articles and a dozen books.”

I am familiar with his ministry through my time as the lead Bishop for the Path1 Focus Area of The United Methodist Church in our collaboration with the General Board of Discipleship. While there, we (Path1 and GBOD) brought him in as a consultant in our missional engagement in church planting and renewal. This too lengthy introduction is my way of asserting that Ed is a critically insightful thinker and teacher with regard to Christianity in the United States (and around the world) who has much worth sharing. I am grateful for his relationship with Gloo - More Informed, Better Connected, Fully Engaged Churches), an organization which Carey Nieuwhof states is “inventing the future of ministry.”]

The following are my notes from that ecumenical evening in Rockwall – with inserts and some paraphrasing – as well as some personal reflections about the future facing the Christian movement in the United States.

In my notes, I wrote down some additional insights in paraphrased form.

So, what are some prescriptions that might indicate where pastors and congregations should engage? Stetzer stressed over and over the need to redevelop ecclesiology (regardless of denomination or theological tribe). He was insistent that pastors and denominational leaders “elevate ecclesiology.” Linked with the importance of ecclesiology was his emphasis on the importance of a return to in-person gathering (see bullet No. 1 above). In doing so he noted that people are being reshaped into ideological communities.

Stetzer lifted up two other specific actions. The first, with particular regard to the “middle rows” – the one-third of a church’s congregation that has become less connected – was to engage the mission, by which he means both evangelism and justice/mercy ministry. He stressed the need to cast a vision for the future that was concrete and communicative. The second was to encourage your leaders. The way he phrased it was “you’re going to have to exhort your leaders!”  He went on to predict that we may be facing many resignations.

Taken as a whole, his summary was: As thought leaders and supporters of the local church, how are you preparing for the following?

For those who are interested, I commend a reading of his whole article 3 Trends Shaping the Post-Pandemic Church - OutreachMagazine.com. It is well worth your time and deep thought.

I would also commend two other articles for serious consideration. The first, which is found in the Oct. 24 edition of  The Atlantic by Peter Wehner is titled "The Evangelical Church is Breaking Apart."  The title is instructive, however, don’t be misled. It is foolish to think this is only about the right leaning, evangelical Christian movement. It is deeply insightful regardless of where you and/or your church is on the theological and political spectrum. 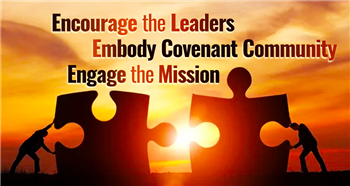 The second and more deeply disturbing article is another published by The Atlantic and one I read more than a year ago (Oct. 2020) and which Stetzer referenced in his article. It is by the noted columnist David Brooks and is entitled “America is Having a Moral Convulsion.” The lead sentence is chilling and merits our deep thought and a carefully considered non-partisan response: “Levels of trust in this country—in our institutions, in our politics, and in one another—are in precipitous decline. And when social trust collapses, nations fail. Can we get it back before it’s too late?”

Allow me to close by stepping into some of my own deep convictions.

“Therefore, since we are justified by faith, we have peace with God through our Lord Jesus Christ, 2 through whom we have obtained access to this grace in which we stand; and we boast in our hope of sharing the glory of God. 3 And not only that, but we also boast in our sufferings, knowing that suffering produces endurance, 4 and endurance produces character, and character produces hope, 5 and hope does not disappoint us, because God’s love has been poured into our hearts through the Holy Spirit that has been given to us.” (Romans 5:1-5)

4 There is a river whose streams make glad the city of God,
the holy habitation of the Most High.
5 God is in the midst of the city; it shall not be moved;
God will help it when the morning dawns.
6 The nations are in an uproar, the kingdoms totter;
he utters his voice, the earth melts.
7 The Lord of hosts is with us;
the God of Jacob is our refuge.  Selah

8 Come, behold the works of the Lord;
see what desolations he has brought on the earth.
9 He makes wars cease to the end of the earth;
he breaks the bow, and shatters the spear;
he burns the shields with fire.
10 “Be still, and know that I am God!
I am exalted among the nations,
I am exalted in the earth.”
11 The Lord of hosts is with us;
the God of Jacob is our refuge.  Selah