A Fifty Dollar ($50) Mistake and Cigarettes: Two Simple Stories of the Holy Spirit Active in Our Lives ©

We make much, as we should, of the mission of the church “to make disciples of Jesus Christ for the transformation of the world.” Such a mission comes directly from the call and claim of the risen Christ as reported in the closing paragraph of Matthew 28:16-20. This is our Wildly Important Goal! However, my hunch is that we need to confess that all too often we act as if God in Christ has given us the mission but that the Holy Spirit hasn’t shown up as promised to lead us (see John 14:15-16). Let’s admit it: It is easy for the best of us to get lost in the COVID-19 Pandemic and the crush of other events. However, the narratives or stories of faith tell a very different tale of the Holy Spirit (the third person of our triune God) moving in our lives. I offer two such narratives as examples of how the Holy Spirit is quite active in our live today.

The first story is passed on to me by District Superintendent and Dean of the Cabinet Leah Hidde-Gregory. It comes from Pastor Amy Anderson at Mart UMC in the Central District. 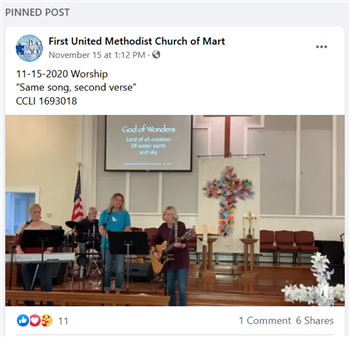 “Each Sunday, we pay $50.00 to boost our services on Facebook. We choose to extend to a 50-mile radius around Mart and run it for a week. We can see how many pages the ad hits, how many people click on the ad for 15 sec or less, and how many watch it [from] beginning to end. We average 1200-1500 people a week that watch it beginning to end.

Last Sunday, as I posted, the boost didn’t show up right away and so I thought it failed. So, I did it a second time. Come that Monday morning when I checked it, there were two! So, I was a little frazzled to realize I had made a $50.00 mistake but went with it. No other choice.

When the boost ended on Saturday and I received the results, apparently the second boost went to a whole other group of people it had never hit before. We finished the week with 3076 people watching our service beginning to end! 3076!!

On Saturday afternoon, I received a message from a man in Wisconsin asking me if I minded calling him. I called. The conversation was amazing! He has watched us the last two months and we traced it back five people deep before we got to the original share from someone in Mart. He told me that he had never been Methodist and had no idea what “profession of faith” meant until he started listening to our services. But now he did, and he wanted to “give his heart to Christ” for the first time. He is 67 years old. We prayed and he sobbed as we said the Lord’s prayer together...which I texted him because he did not know it.

As I told the congregation about my “$50 mistake,” I had someone tell me they wanted to cover that “$50 mistake.” Then, at Ad Board last night, a man stood up and said he wanted to sponsor our second ‘extra’ boosts for the next year. That’s $2600!!”

DS Leah Hidde-Gregory adds to Pastor Amy’s narrative, “Those who accepted his message were baptized, and about three thousand were added to their number that day.” (Acts 2:41)

I am blown away by such evidence of the Holy Spirit moving in our midst and of the faithfulness of the laity and pastor at Mart. This is the WIG narrative unfolding before us!

The second story comes from my rather casual reading of Live Not By Lies: A Manual for Christians Dissidents by Rod Dreher. The author writes about how sometimes God “sends a message to remind us that he exists and has not abandoned us.” During the height of communist power in the Soviet Union, a Christian dissident name Alexander Ogorodnikov was arrested thrown into a Soviet prison. Rather than succumbing to bleak despair, Alexander reasoned that “God led him to that vault of human misery for a higher purpose.” He tells the story this way: 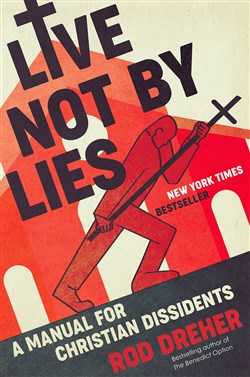 “When they put me in the cell with the other inmates, I said ‘Peace be with you!’” Ogorodnikov remembers. “One of the prisoners asked if I was a Christian. I said yes. He told me to prove it. Another inmate said, ‘We are the scum of the earth. We don’t even have cigarettes.  If your God will give us cigarettes, we’ll all believe in him.’

Ogorodnikov told his fellow prisoners that the body is the temple of the Holy Spirit, and smoking fouls it. But, he continued, “God loves you so much that I believe he would even give you cigarettes as a sign of his mercy.” Ogorodnikov asked them all to stand and pray together for this. Everybody laughed, but they stood respectfully as he led them in prayer.

“That cell was very crowded, but it became very quiet,” he recalls. “We prayed for fifteen minutes, then I told them the prayer was over and they could sit down.  At just that moment the guards opened the cell door and threw a bunch of cigarettes into the cell.” (Rod Dreher, Live Not By Lies: A Manual for Christians Dissidents, pp. 160-1)

Incredulous Dreher reports asking him, “That really happened?!” Alexander Ogorodnikov answered, “That really happened. It was incredible. There was the sign I prayed for. The prisoners shouted, ‘God exists! He exists!’ And that is when I knew that God was speaking to me too. He was telling me that he had a mission for me here in this prison.”

I am brought to tears listening to these two stories. My weak faith and bleached theology are exposed. The words of Jesus speaking to his disciples in the calming of a storm on the Sea of Galilee come to me. He said to them [to me, to us]…

“Why are you afraid, you people of weak faith?” Then he got up and gave orders to the winds and the lake, and there was a great calm.”  (Matthew 8:26)