A Different Trial Worthy of Our Attention ©

1/21/2020 - Christ Discipleship History making disciples
While much of the United States is focused on the impeachment trial of President Trump taking place in the U. S. Senate, I am in Israel on a Holy Land pilgrimage. The same day this writing is scheduled to be posted, we will be at the site of a another and wholly different famous trial. It is a trial I will argue which, in the long run, is more important than what is taking in Washington D.C. (though I readily agree that the Senate Impeachment trial is of critical importance). We can find the details on the trial to which I refer by reading in the later pages of the Book of Acts.

With great fanfare, pomp and pageantry, the Apostle Paul is placed on trial before King Agrippa.  The setting in the 25th chapter of Acts takes place is Caesarea and is stage-managed by Festus the Roman Governor. Caesarea was an important Roman port, a bastion of Roman power and prominence.  The setting reeks of a conflict between ruling government pragmatism and deep conviction faith (allegiance!) to Jesus as Lord (ruler!). 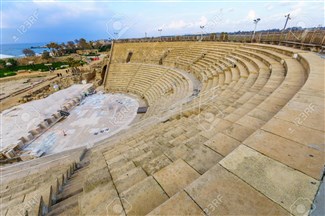 Sitting in the Roman arena in Caesarea, you are in place where Christians were probably martyred. Just a short distance in front of the arena is the site of the important Roman Mediterranean Seaport. Off to the right are the ruins of the hippodrome where quite possibly the trial of Paul occurred. It is a scene of secular power and might. Caesarea is where Paul has been held in prison and put on trial. This is where the Apostle’s life teeters in the balance. It is here that Paul makes one of his courageous witness for Christ. This setting represents a crucial pivot to Paul’s journey to Rome in Christian history.

With great care, Paul establishes his credentials as a faithful obedient Jew. “Every Jew knows the way of life I have followed since my youth because, from the beginning, I was among my people and in Jerusalem.” (Acts 26:4) With precise explication he shares the story of his conversion.

“I saw a light from heaven shining around me and my traveling companions. . .. Then I said, ‘Who are you, Lord?’ The Lord replied, ‘I am Jesus, whom you are harassing. Get up! Stand on your feet! I have appeared to you for this purpose: to appoint you as my servant and witness of what you have seen and what I will show you.” (Acts 26:13, 15-16)

He reaches his summation and appeal to Christ with unshakable conviction (“I wasn’t disobedient to the heavenly vision!” – v. 19) and courageous boldness (“that they should repent and turn to God” – v. 20).
Governor Festus believed Paul to be mad, but King Agrippa is moved to the edge of a faith conversion. Verse 28 in the Common English Translation is rendered, “Agrippa said to Paul, ‘Are you trying to convince me that, in such a short time, you’ve made me a Christian?’” The old King James translation helps us understand the import of what takes place in the trial at Caesarea. “Then Agrippa said unto Paul, ‘Almost thou persuadest me to be a Christian.’” 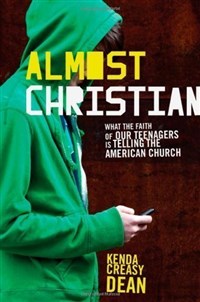 Many a famous sermon has been preached on this text, including John Wesley’s “The Almost Christian.”  Much more recently Professor Kenda Creasy Dean (who spoke at the Central Texas Annual Conference held at Arborlawn UMC in 2013) wrote Almost Christian: What the Faith of our Teenagers is Telling the American Church.  Whoever we are and whatever our background and spiritual pilgrimage, the questions lingers. Am I persuaded?

As we reflect on Paul’s witness and his trial before Festus and Agrippa, I cannot help but recall the old challenge: If you were arrested as a Christian, would there be enough evidence to convict you?

Convict us again Lord of the truth of the gospel; align us again in allegiance to Jesus as Lord above all else.  May we not be almost Christians but a fully devoted follower of Christ.
Bishop's Blog