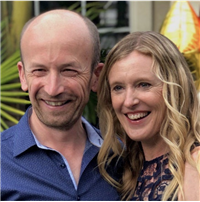 Alex and Hannah Absalom have been in church leadership since 1994 serving in a wide range of settings - from church plants to megachurches. Originally from England (Alex was ordained in the Church of England), Alex and Hannah were called as missionaries to America in 2007 and have served in churches in Oklahoma City, NE Ohio, and Long Beach CA.
From their days in Europe onwards, they have coached, taught and equipped large numbers of churches and leaders. They focus on equipping people in three areas: to be Disciple-Makers, On Mission, and Naturally Supernatural. In August 2018 the Absalom’s planted The Dandelion Project, which focuses on naturally supernatural discipleship and mission via a multiplying network of Home Churches who seek to reveal God’s Kingdom everywhere people are.
Alex and Hannah have personally crafted effective disciple-making and leadership pipelines, overseen the starting of more than 110 mid-sized missional communities, and empowered numerous individuals with Biblical teaching and practices that enable them to operate in the power of the Spirit wherever they live, work and play. They have also spoken to thousands of leaders from an incredibly diverse spectrum of backgrounds, contexts, and denominations and in a wide-range of settings, such as local churches, at conferences and through training resources.
Hannah is committed to investing in Millennials, raising up women leaders, and helping families live as missionaries in their neighborhoods, schools, and workplaces. Alex is an unusually practical (and witty!) teacher and coach, who brings strategic insight and much hard-won experience from the front lines.
Currently the couple live in Long Beach, CA and have three cheeky but charming young adult sons.

For a taste of what to expect from our time with Alex and Hannah, click here for a sampling of YouTube videos.