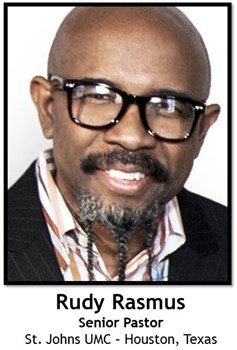 Rudy Rasmus is a pastor, author, and global humanitarian with a passion for outreach to the world’s poorest citizens. He often says his primary spiritual gift is “hanging out.”

From his previous life of owning and operating a “borderline bordello,” today Pastor Rudy co-pastors the St. John’s United Methodist Church located in Downtown Houston with his wife Juanita that began with 9 existing members in 1992. St. John’s has grown to over 9,000 members (30% were formerly homeless) in 21 years into one of the most culturally diverse congregations in the country where every week people of every social and economic background and ethnicity share the same pew. He attributes the success of the church to a compassionate group of people who have embraced the vision of tearing down the walls of classism, sexism, and racism and building bridges of unconditional love, universal recovery, and unprecedented hope. A recent in-house poll revealed the number one reason people attend St. John’s is because they can “feel the love” from the parking lot to the pew.

For three years Pastor Rudy was a monthly contributor to Oprah Winfrey’s “O Magazine’s” ethics column entitled “Now What Do I Do” and is currently a featured faith-blogger in the Houston Chronicle’s on-line edition. He is a 2008 gospel music industry Stellar Award nominee for the music project “Touch” and is the author of two books including the newly released “Jesus Insurgency” with Co-Author Dottie Escobedo-Frank (Abingdon Publishing, Nashville), and “Touch: Pressing against the wounds of a broken world” (Thomas Nelson Publishers, Nashville). Pastor Rudy joined SiriusXm Radio as an on air personality in 2010 and can be heard weekly on his show “The Love Revolution with Pastor Rudy” on SiriusXm’s Praise Channel.

Pastor Rudy founded the Bread of Life, Inc. (a not for profit corporation) with Juanita in December of 1992 and began serving dinners to the homeless in the sanctuary at St. John’s. Years later the Bread of Life has changed the landscape of Downtown Houston providing an array of services to homeless men and women seven nights a week in the Bread of Life facility on the St. John’s campus. The project provides over 12,000 hot meals each month to the homeless men and women, distributes over 9 tons of fresh food weekly to hungry families, and provides shelter to over 100 homeless individuals every night from 6pm-6am in a pioneering “housing-first” initiative called “After Dark” where services are provided during the critical night-time hours. St. John’s is also one of few faith communities in the U.S. providing HIV/AIDS testing to churchgoers on Sundays through the innovative “Get Tested Project.” After many years of service to the community, Pastor Rudy received the coveted Jefferson Award (considered the Nobel Prize of community service) at a ceremony in Washington, DC in 2009. For years Pastor Rudy has coordinated domestic and global anti-hunger initiatives in conjunction with Beyoncé’s concert tours and travels extensively developing food programs around the world for people experiencing food insufficiency. After a recent life-altering trip to India, Pastor Rudy is now reflecting on the need for Americans to address the issues of human trafficking and mass incarceration with urgency.

Rudy and Juanita have been married for 28 years and are the proud parents of two phenomenal daughters, Morgan and Ryan.