by J. Vance Morton* and Mary Andreolli**
The Central Texas Conference Disaster Response Ministry Team has worked hand-in-hand with the United Methodist Committee on Relief (UMCOR) for 14 years. During that time the two organizations have led efforts all across Texas and the U.S. to not just rebuild homes, but to rebuild lives by caring for the emotional and spiritual needs of those recovering from a disaster. The CTC/UMCOR team has become so well-known and respected in times of crisis that CTC Coordinator of Disaster Response Rev. Laraine Waughtal often hears something akin to “Oh thank God! The Methodists are here!” whenever she arrives on the scene with an ERT team.
“Our partnership with UMCOR has been invaluable over the years,” Laraine recalled. “Their support comes in so many forms. Everything from phone consultations, to direct site visits, to providing training for our conference Early Response Teams, Emotional and Spiritual Care Teams and Connecting Neighbors. When we hit complications they are always available to help us with their years of wisdom to untangle the unexpected problems that inevitably come up during a disaster.”
A vital piece of UMCORs ability to respond so quickly and efficiently is due to its business model of putting every cent donated to a particular relief effort directly to that effort. Thanks to the continued generous giving received by local churches during UMCOR Sunday (formally One Great Hour of Sharing), which pays all of the organizations overhead and administrative costs, UMCOR is able to funnel all funds received directly where they are needed/intended. UMCOR’s strong financial health and commitment to accountability and transparency have earned it a 4-star rating from Charity Navigator, the highest possible ranking from America’s largest independent charity evaluator. This is the first time that UMCOR has earned this top distinction.
“What Charity Navigator has recently discovered via its investigation and analysis, CTC United Methodists have known for a long time. There is not a better, more fiscally sound run organization,” remarked Dr. Randy Wild, executive director, CTC Center for Mission Support and the Conference Secretary.

Charity Navigator has awarded only the most fiscally responsible organizations a 4-star rating. In 2011, Charity Navigator added 17 metrics, focused on governance and ethical practices as well as measures of openness, to its ratings methodology. These metrics, which account for 50 percent of a charity’s overall rating, reveal which charities operate in accordance with industry best practices and whether they are open with their donors and stakeholders. On June 1, 2016, Charity Navigator upgraded its methodology for rating each charity’s’ financial health with CN 2.1. These enhancements further substantiate the financial health of its 4-star charities.

“UMCOR’s exceptional 4-star rating sets it apart from its peers and demonstrates its trustworthiness to the public,” according to Michael Thatcher, President & CEO of Charity Navigator. “Only a quarter of charities rated by Charity Navigator receive the distinction of our 4-star rating. This adds UMCOR to a preeminent group of charities working to overcome our world’s most pressing challenges. Based on its 4-star rating, people can trust that their donations are going to a financially responsible and ethical charity when they decide to support UMCOR.”

As a ministry of The United Methodist Church through the General Board of Global Ministries, UMCOR’s goal is to assist the most vulnerable persons affected by crisis or chronic need. “While most of us think about its work only during times of disaster, UMCOR also works to alleviate human suffering and advance hope and healing in more than 80 countries around the world day in and day out,” reminded Dr. Wild. “No matter if you are talking about its programs and ministries in disaster response, health, sustainable agriculture, food security, relief supplies – just to name a few. It is because of this high level of trust in UMCOR our CTC churches have faithfully responded at the highest levels with their giving whenever asked.”
“We believe all people have God-given worth and dignity. It is important our donors trust that we’re using their donations wisely to accomplish this goal,” said Thomas Kemper, chief executive of the General Board of Global Ministries. “This 4-star Charity Navigator rating, along with the fact that UMCOR has met all 20 of the criteria set by the Better Business Bureau for charities, demonstrate to our supporters our good governance and financial accountability.” 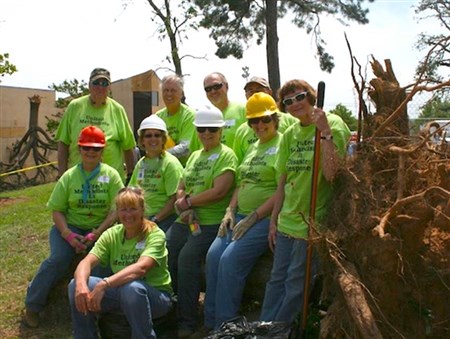 Currently, the CTC is working with UMCOR and its grant money to complete work in the flood ravaged areas in Williamson and Ellis counties and the ongoing projects in Corsicana and Granbury as well as the just added to the plate tornado relief and recovery efforts at Lake Whitney. To date, the CTC has received $580,000 in grants and direct donations to help those affected in these areas get back on their feet. Rev. Waughtal says the partnership allows her and the conference’s ERT and UMVIM teams to be where they are needed when they are needed with few fiscal concerns to hinder their efforts.
“Initially, we always receive a $10,000 UMCOR grant for start-up costs,” Laraine reported. “After the initial assessments are done and we have a better grasp of the magnitude of the situation, then we begin discussions about what our part will be in the recovery ranging from volunteer work, construction supplies and case management.”
“UMCOR has always been very generous to our conference any time a disaster has struck,” Laraine continued. “As an example, this year, we finally completed our work in West following the April 2013 fertilizer plant explosion. Besides the abundantly generous donations of our conference, UMCOR came through with a grant of $220,000. Without their help and the generosity of our churches and individuals giving directly to relief efforts, many people would never have their homes restored after disaster strikes. I truly believe that UMCOR is one of the best things the United Methodist church has going.”

**Mary is Executive Director of Communications for The Advance & Fundraising for the General Board of Global Ministries.  mandreolli@umcmission.org