Will GC16 Remake the UMC Map?

Could reshaping the map of The United Methodist Church help strengthen the denomination?

by Heather Hahn* and Vance Morton** 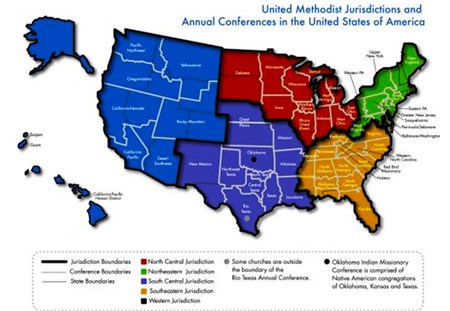 Delegates to the 2016 General Conference, the denomination’s top lawmaking body, will consider proposals that aim to do just that. Among them are petitions that would alter jurisdictional boundaries in the United States, create a U.S. central conference or revamp the denomination’s regional structures altogether.
Behind these efforts is the hope that changing the map means changing the denomination’s prospects. Proponents of the various plans are looking to address challenges such as reversing the long-term decline in U.S. membership.
At present, The United Methodist Church has five jurisdictions in the United States and seven central conferences in Africa, Europe and the Philippines. Both jurisdictions and central conferences act as the denomination’s intermediate organizational structures, encompassing groups of annual conferences and overseeing the elections of bishops.
There is a key difference between the two. Unlike jurisdictions, each central conference has authority under the denomination’s constitution to make “such changes and adaptations” to the United Methodist Book of Discipline as missional needs and differing legal contexts require.
Most of these the map-changing proposals require amending the denomination’s constitution, part of the Discipline. Ratification requires a two-thirds majority vote at General Conference and then a two-thirds majority of the total votes at annual conferences. That means most of the plans would not go into effect until 2020, at the earliest.
As many as five plans have been formally submitted to address this issue. The Central Texas Conference and North Texas Conference delegations are bringing legislation that would create a U.S. Central Conference. The new body would meet back-to-back with General Conference and have the same U.S. delegates. The hope is a shorter and more globally oriented General Conference.
“I think its simplicity is what makes it appealing,” said the Rev. Tim Bruster, a Central Texas delegate and one of the plan’s main proponents. The plan leaves current jurisdictional boundaries unchanged.
Rev. Bruster, senior pastor at First United Methodist Church in Fort Worth, noted that for around 25 years, United Methodist studies have been recommending a U.S. regional conference. He and other proponents envision the new conference being able to discuss U.S.-specific issues such as clergy pension programs and ordination requirements. Bruster also sees the conference as a place to discuss strategies for increasing worship attendance in a country where Christianity is no longer the cultural default.
“The (plan’s) primary goal is trying to address the missional needs of the church in the U.S. and make sure the people who need to be talking about these things are in the room,” Rev. Bruster said.
To read about the other proposals to be debated and considered at GC16, please see Heather’s full report on umc.org/news.

*Heather is a multimedia news reporter for United Methodist News Service. Contact her at (615) 742-5470 or newsdesk@umcom.org

**Vance is the director of Communications & IT for the CTC.  vancemorton@ctcumc.org