by Sam Hodges* and Vance Morton** 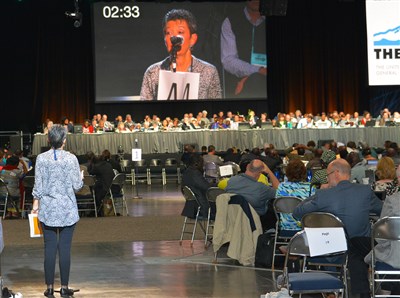 A day after a solemn and moving remembrance of Methodists’ involvement in the Sand Creek Massacre of 1864, delegates to General Conference 2016 overwhelmingly approved a resolution calling on United Methodist agencies to raise awareness about the harm caused by sports teams that use mascots or symbols that disrespect Native Americans.
The petition that passed May 19 was an amended version of the one originally submitted. The amended version deleted language that would have called on United Methodist groups not to have meetings in cities that have sports teams with such mascots or symbols. The Washington Redskins and Atlanta Braves have been at the center of debates about sports team names and symbols. The UMC has General Boards that are headquartered in D.C. and Atlanta.
Before the vote was taken, Cynthia Ann Taylor, Baltimore-Washington Conference, rose and spoke for going back to the original petition and moving meetings from these cities, saying to do so would be “showing with our money that we will not tolerate racism against Native Americans.” A point of view not shared by Kim Simpson, Central Texas Conference Lay Leader and a member of the CTC delegation. 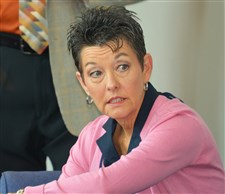 Kim, who noted that she is half Native American, argued during floor debate that by going ahead with meetings in cities with demeaning sports team mascots, the denomination has the contacts and leverage to push for change. “By keeping our meetings and our money in these cities, then we can make an impact,” she said.
Kim also pointed out the practical challenges of moving meetings when The United Methodist Church has a building in Washington, D.C., that is home to the denomination’s Board of Church and Society, and when the Board of Global Ministries is moving to Atlanta.
Cynthia Kent, chair of the Native American International Caucus, said she prefers the boycott strategy and was disappointed General Conference did not go back to the original resolution.
She said she would work with her caucus’s board to consider a resolution that the caucus will not attend meetings in cities with sports teams that have mascots demeaning to Native Americans. Kent added that her caucus would continue leaning on other United Methodist groups not to meet in such places.
Thomas Kemper, top executive of the Board of Global Ministries, said his agency has been mindful and active on the issue even as it moves to the home of the Atlanta Braves. “It’s a justice issue, so we are very clear that we support all efforts to change these mascot names of sports teams,” he said.
Kemper noted that the agency’s Native American ministry has been expanded to include a focus on challenging teams with Native American mascots, including the Braves. “As soon as we are fully moved to Atlanta, we will intensify these conversations,” Kemper said.
A long church history on mascots
The United Methodist Church has engaged in the issue of sports team names and mascots for years, including through past General Conferences resolutions that had expired. One, approved by General Conference 2004, called on the denomination to have meetings in cities “that do not sponsor sports teams using Native American names and symbols.”
In 2006, the denomination’s Commission on General Conference retracted Richmond, Virginia, as the site of General Conference 2012, having belatedly learned that the city’s minor league baseball team was the Richmond Braves. Tampa, Florida, became the location.
The Rev. David Wilson, a delegate from the Oklahoma Indian Missionary Conference, said the earlier resolution calling for moving meetings “had teeth,” and pointed to the Richmond-to-Tampa move.
But he was glad General Conference 2016 made an official statement.
“It’s a good start,” said Wilson, a member of the Choctaw nation of Oklahoma.

**Vance is the director of Communications & IT for the CTC.  vancemorton@ctcumc.org